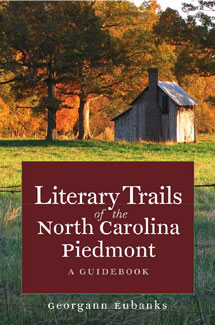 As a guide to the literary trivia of the Piedmont, Georgann Eubanks’ new book, Literary Trails of the North Carolina Piedmont (UNC Press), is a gem.  The book will be treasured by those who love literature and the rich tradition of homegrown and imported talent that has not only celebrated this region in words, but at times taken it to task for its prejudices and occasional insularity. For individuals looking to gain a better understanding of the Charlotte region – its natural beauty, cultural norms, and historical narrative – Eubanks’ book is also an important resource that demonstrates not only the significant role of place in literature, but literature’s role in helping us understand place itself.

Literary Trails of the North Carolina Piedmont is the second in what will be a three volume-set of guidebooks written by Eubanks, published by UNC Press, and sponsored by the N.C. Arts Council.  The first volume, Literary Trails of the North Carolina Mountains (which actually includes the Charlotte-area counties of Catawba, Lincoln and Cleveland), was published in 2007, and Eubanks is currently preparing the third and final volume focusing on eastern North Carolina.  Following in the footsteps of other well-known guidebooks about the Tar Heel State (including the Depression-era North Carolina: The WPA Guide to the Old North State, republished in 1988 by the University of South Carolina Press, and Catherine Bishir’s and Michael Southern’s series of guidebooks published by UNC Press on North Carolina’s historic architecture), Eubanks uses the genre’s familiar approach of presenting tours of regional interest that can be enjoyed by car, and in the case of downtown Charlotte, by foot.  These tours provide the reader with a surprisingly rich variety of sites associated with interesting trivia about writers both famous and obscure, including the place in downtown Charlotte where William Styron may have lost his virginity and the home in Dilworth where Carson McCullers began her novel The Heart is a Lonely Hunter.

A closer reading of these pages, however, reveals an author who appreciates the influence of place on her subjects’ writing, and in turn, the local impact these writers have had as their words have served as a mirror for many Piedmont communities, reflecting both their virtues and their unacknowledged shortcomings.  She includes a poem by Sally Buckner about her father’s annual forage for the family Christmas tree during the Depression, combing the rural backroads of Iredell County for the perfect cedar.  For anyone who grew up in the rural parts of the Charlotte region before Fraser Firs from the NC mountains became the holiday tree of choice, Buckner’s poem is not just a nostalgic trip back in time, but an evocation of the simple beauty of the rural Piedmont, where cedar trees still line many a fence row and field edge, and where the practical values and economic livelihood of the people who live there derive from their relationship with the land.

There’s also a clear connection between some of the writers spotlighted by Eubanks and the industrialized landscape of the “New South”.  As she notes, one can’t read W.J. Cash’s classic The Mind of the South without appreciating the influence that Charlotte had on his view of the New South (including its many contradictions) as he wrote the book’s manuscript from an apartment in the city’s Fourth Ward.  Likewise, the tour that includes Gastonia demonstrates how the famous 1929 labor strike at the Loray Mill spawned numerous literary responses to that tragic event, as writers turned to both fiction and nonfiction to try and make sense of a conflict that, eighty years later, continues to affect how people view the legacy of the Piedmont’s textile industry on the region’s economy and culture.

I must confess to a certain bias in my reading of Eubanks’ book because of the special attention she gives to some of the Stanly County writers who influenced my own appreciation of the importance of place as a boy growing up outside of Badin.  From folklorist Fred Morgan, whose “ghost tales” were inspired by the stories he heard as a journalist while visiting remote settlements in the Uwharries, to the “Writing Rosses of Stanly County”, that family of writers whose talents I’ve always felt have gone underappreciated, these were the authors who spoke to me as a young man through their lyrical prose and poetic representation of what had previously been for me the commonplace.  Their words helped me to reconcile the natural impulse of all young people to move beyond their home to make their way in the world, with the simultaneous pull to remain connected to and fully a part of what Wendell Berry would call one’s “native land”.

I suspect that this influence of place – on both the writers and those who read their books and poems – is what Georgann Eubanks had in mind when she wrote in her preface that “this narrative goes beyond North Carolina literature itself.  It requires a deeper imagining – to see what these authors have seen, to breathe the air in the places where they have lived and worked and written, to consider their aspirations, fears and struggles.”  It’s worth picking up a copy of Literary Trails of the North Carolina Piedmont, taking a weekend drive (or walk) through the Charlotte region, and letting that “deeper imagining” unfold as you visit the places that inspired these talented writers.