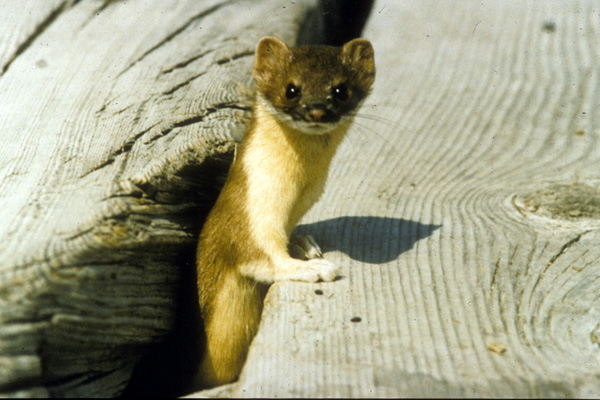 As you've likely gathered from a number of both my and Ruth Ann Grissom's past articles on this website, it is pretty safe to say that there's still a lot about wildlife we just don't know in the Uwharries, and a lot of other places as well. One factor that is largely responsible for this for many species is that, quite frankly, they don't want to be seen. Many species, especially predators that rely on skills of stealth and surprise for their very survival, will almost always see us before we have a chance to see them. I spend quite a bit of time in the woods myself and have only once seen a bobcat, and that was from my car.

Another such species in this area that we really don't know that much about is the long-tailed weasel. Long-tailed weasels (Mustela frenata) have a large range, from southern Canada all the way across the U.S. and Central America into just the very northern tip of South America. They are small brown rodents with white underbellies, and they possess a long tail that is almost half the size of their body with a distinctive black tip. In more northern sections of their range, their fur whitens as a winter camouflage. They are typically found in grassland habitat and den in the ground, oftentimes in the burrows left by chipmunks, lining the den with the fur of their prey.

For a relatively small creature, long-tailed weasels are a courageous and fierce predator, and although they feed largely on mice and other rodents, they are also known to kill prey such as rabbits that are much larger than themselves. They stalk their prey and may wave their heads back and forth to catch a scent, then strike rapidly, usually killing their prey with just one blow. They prefer fresh meat, and an old wives tale you may have heard is at least partially true - they will lap up the blood of their victims, but they are not "vampire" weasels, as they do not suck blood from animals. They may also eat other prey such as birds, bats, and amphibians.

When we don't have a lot of knowledge about these more secretive species, and when time and resources for learning about them are limited, we often rely upon local knowledge to help us understand them. I know from experience that you can learn a lot from conducting survey work, but you are certainly more likely to see plants and animals when you live and play among them. If you've seen one of these cool animals, we'd certainly love to hear about it. One of the things we’d be interested in knowing is where you spotted them, specifically what type of habitat? Most long-tailed weasels like open grassland areas where they can hunt and see prey easily, but I've also heard they are sometimes spotted along riparian areas, particularly near rocky outcrops. Also useful to know would be what time of day they were seen, and what they were doing when you saw them - maybe hunting prey or selecting a den site.

Long-tailed weasels are so secretive that there is certainly much more to be learned about them, and they may have even more interesting habits that we don't know about. And for fearsome predators, they are really cute little guys, and I hope to be fortunate enough myself to spot one someday. Sounds like another good reason to get outdoors....