A native tree with distinctive bark 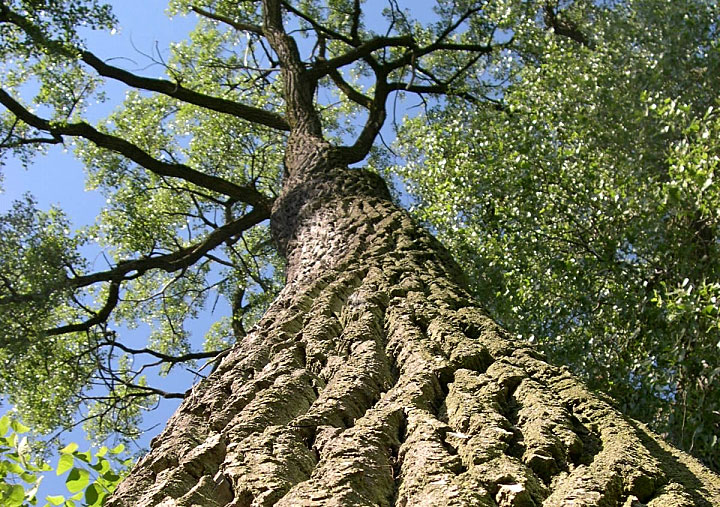 While walking a property the other week, we stumbled on a tree with heavily furrowed bark. It took a few minutes of pondering, but we finally decided it was a cottonwood tree, and a large one. Eastern cottonwood (Populus deltoides) is a widespread deciduous native found along sandy riverbanks and in bottomlands – exactly where we found this one near the banks of the Uwharrie River. In North Carolina it is generally uncommon to occasional.

The Eastern cottonwood has smooth, toothed, pointed, deltoid (triangular) leaves that are not similar to other tree species in the state, other than the Swamp cottonwood found in the coastal plain. They are the fastest-growing commercial forest species in North America, but are not long-lived, living only on average 70 to 100 years. Eastern cottonwood is also one of the taller species in eastern forests, reaching heights of up to 120 feet and diameters of 4 to 6 feet. It is in the poplar family, but yellowish twigs, coarsely toothed leaves and gummy end buds distinguish this from the other poplars. It is also sometimes called the “necklace poplar.” It is native from eastern North America through the Great Plains.

Tiny male and female flowers appear in separate catkins. The male flowers are red and the female flowers are green, on separate male and female trees (a term known as dioecious). Flowering occurs from February to April before leaves appear. You may be most familiar with the species in the springtime when their seeds drift in the breeze suspended from a tuft of white “cottony” hairs. I’ve experienced a “snow” of these on the Rocky River while kayaking. These white tufts typically collect along gutters, curbs, roadsides and fences.

The wood is lightweight and soft and may warp during drying. It is used for pulpwood, baskets and crates and to make high quality magazine paper for printing pictures. Because the wood of the branches is rather soft and brittle, this tree is vulnerable to storm and ice damage. Cottonwood is very intolerant of shade and susceptible to fire.

Eastern Cottonwood and similar species are an important food source for many insect species, and in turn these insects are food for many birds. Some birds feed on the buds and catkins in early spring. White-tailed deer and rabbits browse sedlings and young trees. Beaver will use the trees for both food and construction material. Keep an eye out for this species on your next trip in the woods along a river bottom. With their distinctive bark they are hard to miss.