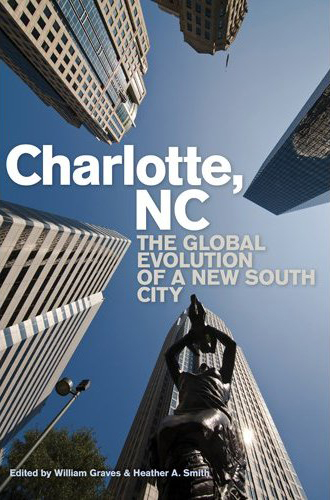 For both serious and casual observers of Charlotte’s economic and cultural history, a new book released in July provides a fascinating look at the effects of globalization on the city’s recent development.  Published by the University of Georgia Press and edited by UNC Charlotte geography professors Bill Graves and Heather Smith, the book Charlotte, NC: The Global Evolution of a New South City is a collection of chapters written by some of the city’s most knowledgeable experts on topics as diverse as the growth of Charlotte’s banking industry, the rise of NASCAR, new uses for old textile mills, and immigrant influences on the city’s urban form.  Many of the authors are also regular contributors to this website, including Graves and Smith, UNC Charlotte architecture professors David Walters and José Gamez, and historian Tom Hanchett of the Levine Museum of the New South.

Some of the material covered in the book will be familiar to those who have followed Charlotte’s rise from a medium-sized southern city to a prominent player in the world’s financial industry over the past quarter-century.  Even within that familiar context, authors such as David Goldfield, Matthew Lassiter, and Stephen Samuel Smith share many interesting stories about how the national and global ambitions of the city’s financial institutions often merged with those of civic boosters, elected officials and community activists to influence major policy issues, including the redevelopment of Charlotte’s center city, Mecklenburg County’s response to school desegregation (both past and present), and ideological challenges to public funding of the arts.  These stories of corporate influence are indeed fascinating, but not surprising in a city that owes its status to leaders and boosters who made, as Lassiter puts it, “remarkable achievements in dreaming into existence a city with no compelling reason to exist where it does.”

What is more surprising in these chapters is the degree to which Charlotte’s emergence as a “globalizing” city is now changing the fabric of the city itself and its varied institutions.  In an ironic twist of fate, the same competitive drive that led Charlotte’s banks to invest so generously in transforming their hometown into a more global and cosmopolitan place to attract talent eventually changed the banks themselves into more complex and geographically-diffused entities, thereby making them less focused on local issues, and, especially in the aftermath of the recent global crisis within the financial services industry, more vulnerable to losing their status as Charlotte-based institutions.  Jose Gamez makes a compelling case for how Charlotte’s growing Latino community is reshaping the urban form of some of the city’s aging, mid-twentieth century neighborhoods.  And as Ronald Mitchelson and Derek Alderman point out in their engaging chapter on the ascendance of NASCAR in the Charlotte region, even this homegrown sport with deep roots in the red clay of the Carolina Piedmont is experiencing more global influences than ever, with Japanese automaker Toyota entering the sport in 2007 and international drivers such as Juan Montoya gaining widespread media and fan attention.

While most of the contributors are scholars in the fields of history, geography and architecture, who generously sprinkle their chapters with academic theories and terminology (be prepared for terms such as “typologies” of place and “heterotopic spatiality”), the book is a remarkably readable and accessible look at Charlotte today, written by individuals who truly know their subject.  For those looking for affirmation that Charlotte has truly “arrived” as a global city, Graves and Smith are quick to state in the first two sentences of their introduction that “Charlotte, North Carolina, is not a ‘global city.’ It is, however, a globalizing one.”  Inherent in that statement are both the amazing accomplishments and the unfulfilled aspirations of a city that has always strived for greatness.  Charlotte, NC: The Global Evolution of a New South City is an important contribution to our understanding of that unfolding narrative of Charlotte’s emergence on the national and global stage.

Note:  Co-editors Bill Graves and Heather Smith will discuss their new book, and the “globalizing” of Charlotte, at an upcoming educational forum at the Levine Museum of the New South on November 17.  Several authors of  individual chapters will also be speaking and/or available for questions.  The forum will be open to the public; for more information go to http://www.museumofthenewsouth.org/calendar/.

To order a copy of Charlotte, NC: The Global Evolution of a New South City, please visit the University of Georgia Press website.