For three years, transit advocates have lobbied for the proposed Silver Line to bring passengers closer to uptown — instead of the planned route that would follow Interstate 277.

The Charlotte Area Transit System refused, saying the I-277 route north of uptown would spur more  development. The transit system also said bringing the train into the center city would be too complicated.

But a surprising thing happened this week: CATS proposed a new route for the Silver Line that would do just that — bring the train directly into the heart of uptown.

Under the new proposal, the Silver Line would enter uptown through the First Ward, as originally planned. Instead of following I-277 around the center city, the train would take a sharp left turn and merge onto the existing Lynx Blue Line tracks.

The Silver Line would share those tracks — known in the transit world as “interlining” — until the Carson station in South End, where the line would end.

That would be the first segment of the Silver Line.

The second segment would begin at the airport and follow Wilkinson Boulevard to uptown, as originally planned. It would then go to the planned Gateway Station near Truist Field and terminate. It also might go even farther, using the existing Gold Line streetcar tracks to Trade and Tryon. The new plans would mean there would be no light rail going through Fourth Ward and passing near the AvidXchange Music Factory, and no section going down Carson Boulevard in South End.

The original Silver Line was envisioned as a continuous track from Matthews to the airport, and possibly to Belmont. CATS said it can’t connect the two segments because there is too much development in South End where the train would have to run.

All of the planning for the Silver Line is, at this point, a theoretical exercise: Funding for the project is in limbo, because it would require a vote on a sales tax increase that would need the approval of the state legislature — which seems unlikely to happen anytime soon. Construction would be many years away, with a previously projected completion date around 2040.

At-large City Council member Julie Eiselt said she is “thrilled” with the proposed new alignment. She said breaking the Silver Line into two segments is unfortunate, but the most important thing is for the train to come directly into the center city. 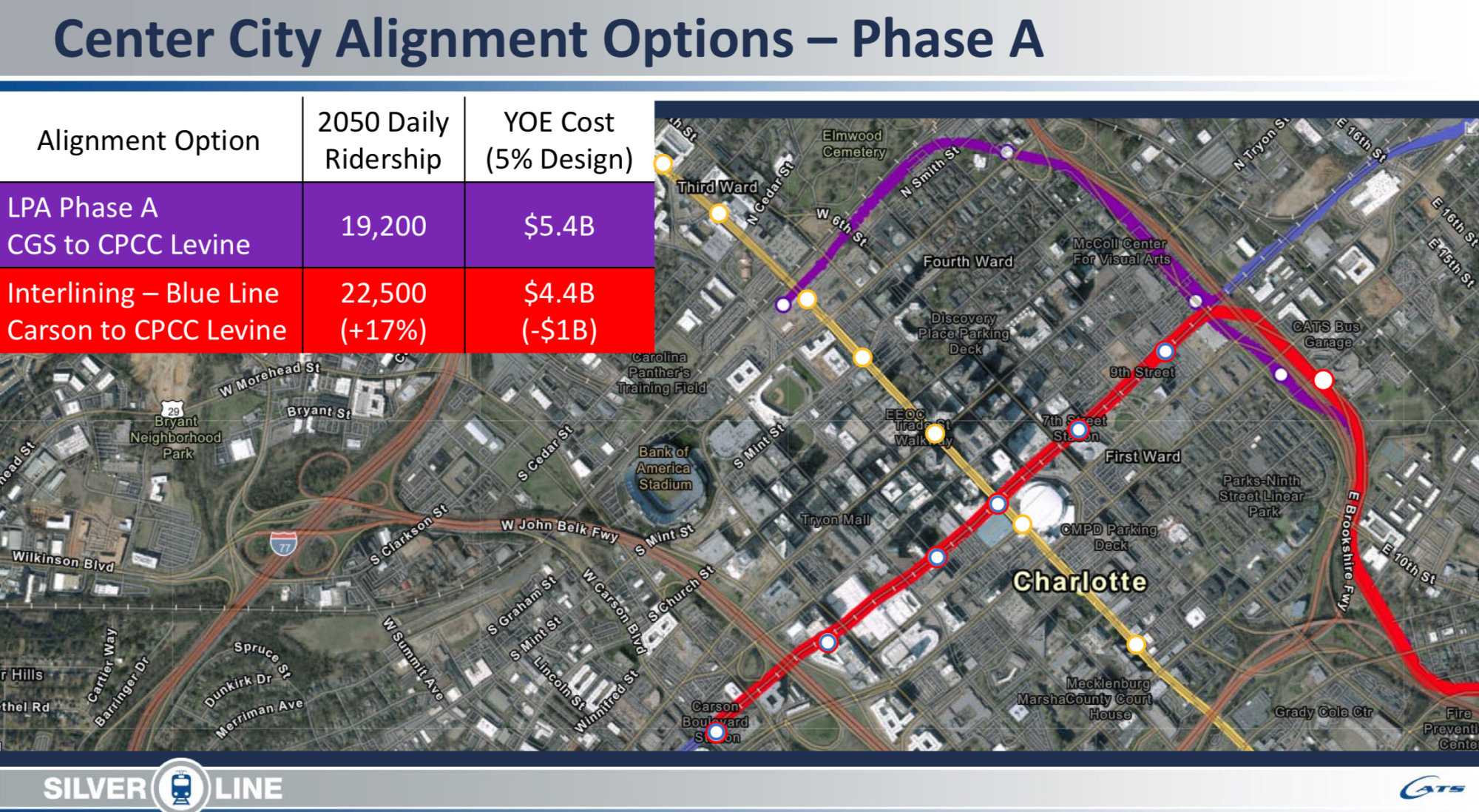 Andrew Mock, a senior project manager for the Silver Line, says the revised alignment would cost $4.4 billion, compared with $5.4 billion if it looped around uptown. He also said ridership on that segment would go from 19,200 daily trips in 2050 to 22,500 trips a day.

“There would be significant cost savings and an increase in ridership,” he told the City Council’s transportation committee Monday.

CATS chief executive John Lewis said the route that skirts uptown would bring the train near more homes. But he said it’s more important for the train to go where people work.

“Given the choice, we’d rather have more employment opportunities, and we can offset that with the lower number of households,” Lewis said.

The city’s presentation Monday raises questions: Why did CATS change its position And why did it oppose a similar alignment in 2019, 2020 and 2021?

In the past, Eiselt, along with advocates like Shannon Binns of Sustain Charlotte, had pushed for the Silver Line to go into center city instead of loop around it. Former CATS chief executive Ron Tober also lobbied for that route.

They were dismissed. CATS said previous ideas — which included tunneling under Trade Street to cross uptown as a subway — were too expensive and disruptive.

City officials such as former planning director Taiwo Jaiyeoba touted the Silver Line’s development potential. The city’s talking points — and those of its consultants — were often focused on the train’s potential to remake empty areas, fostering a South End-esque boom in a part of uptown still dominated by asphalt and gravel parking lots.

Here is an excerpt from a September 2021 Transit Time article about the Silver Line:

Jane Lim-Yap, a consultant advising the city, said putting the line along 11th Street would open 30 more acres worth of currently underused land than tunneling under Trade Street. … The 11th Street alignment would also generate an estimated $20 million to $35 million worth of annual property tax revenue after the Silver Line’s construction, Lim-Yap said. That’s more than the $15 million to $20 million worth of annual additional property tax that would be generated along Trade Street.

But earlier this year, the Urban Land Institute released a report saying that the shared Blue Line/Silver Line route gave Charlotte the best chance of securing federal funding. Because it’s essentially impossible to build the line without federal support, that apparently pushed transit officials to reconsider the Silver Line’s path.

The Silver Line debate often focused on whether to loop around the city (the city’s original recommendation) or to build a tunnel under Trade Street (pushed by Tober, the former transit chief).

The tunnel was dismissed as being too expensive and too complicated.

But the city had also considered and dismissed other options, such as sharing the Gold Line streetcar tracks and the Lynx Blue Line tracks. Here is a graphic from 2018 showing those options: 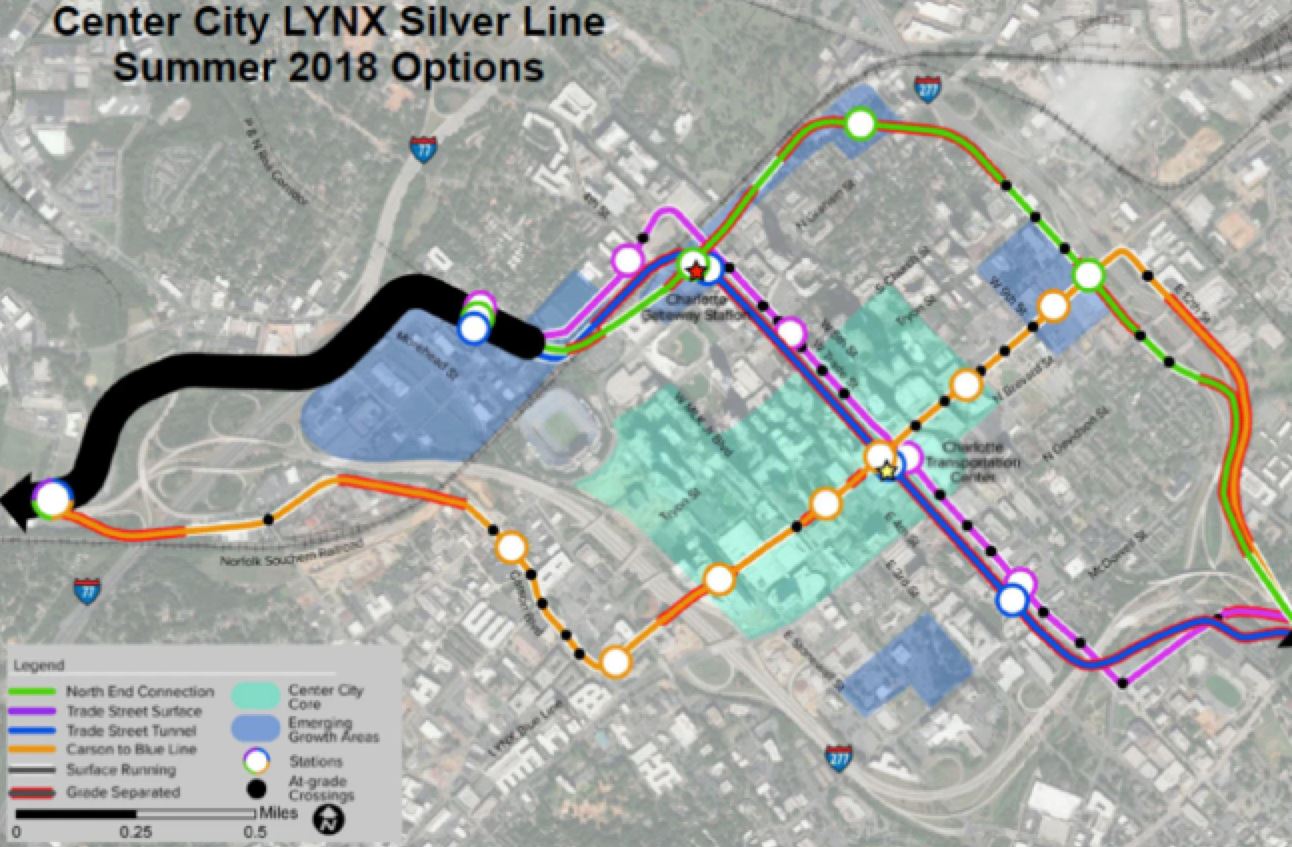 This map from 2018 shows the city considered — and rejected — sharing the Blue Line tracks as well as sharing the streetcar tracks. Both are now seen as viable options.

The city said they were unworkable.

But now they are not only workable — they are seen as the best option?

It remains to be seen if the shifting routes foreshadow a bigger shift in CATS’ planning for the Silver Line. Will economic development continue to be seen as the priority — or is that going to take a backseat to ridership numbers?

And while the new alignment could make it more likely that the Silver Line secures federal funds and can move forward, it raises other questions, such as how well connections between the east and west lines would work. (Mock said planners think only 6% of Silver Line passengers would want to go from one end of the line to the other. Almost all passengers would start or end their journey in uptown.)

Given the split in the middle, the Silver Line would be basically two separate routes, an eastern and a western line. Would CATS still try to expand the Silver Line east in Union County and west in Gaston County?

Geek out: View the “CATS Silver Line Interlining Analysis” with the new plans that were presented to a City Council committee this week.

This story was originally published in Transit Time, a joint newsletter produced by the Charlotte Ledger, WFAE and the Urban Institute.