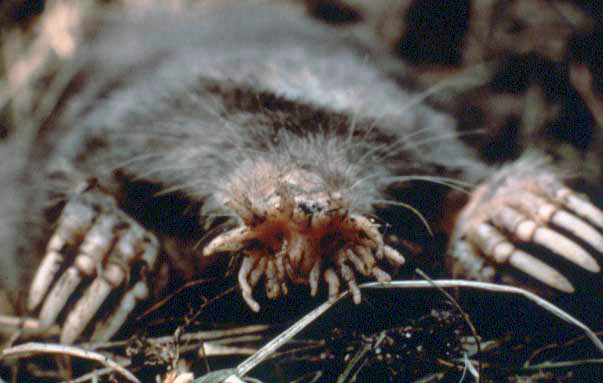 The star-nosed mole (Condylura cristata) has such an unusual appearance that if you spot one, there will be no question what you have found. The star-nosed mole’s nostrils are ringed by 22 rays, or fleshy tentacles, that possess more than 25,000 minute sensory receptors, known as Eimer’s organs.

Because of this distinctive nose, the moles have perhaps the best sense of touch of any mammal. The sensory receptors can touch 10 or 12 different places in a single second. With each touch, 100,000 fibers send information to the mole’s brain. That’s five times more touch sensors than are in the human hand, all in one nose that is smaller than a fingertip.

The star nose is believed to help the animal forage for small prey and can also detect seismic wave vibrations. The nose also may be able to detect faint electrical signals from aquatic prey. If true, the star-nosed mole and the platypus (Ornithorhynchus anatinus) are the only mammals known to possess this ability.

The star nose may be helpful to humans as well. Molecules in the mole’s nose turn physical signals of touch into electrical signals in the nervous system. As many of these molecules are also found in people, better knowledge of them may lead to new treatments for pain.

Star-nosed moles are native to eastern North America. They are relatively common, but as they inhabit poorly drained areas with a marsh-like habitat, they are not often found near humans. Destruction of wetland environments negatively affects this species.

The star-nosed mole is the only mole species out of 39 that lives in swamps and marshes. The mole is not limited to underground tunnels, but can easily swim and forage for food in lakes and streams. It is one of only two mammals, along with the water shrew, that can smell underwater, by blowing air bubbles and sucking them back into its nose.

The star-nosed mole has thick, blackish-brown, water-repellant fur; large scaled feet with large claws; and a long, thick tail. During the winter, the tail swells to 3 to 4 times its normal diameter and is believed to store fat needed for the colder months. The mole is functionally blind, relying on its nose and sense of touch to detect prey.

Star-nosed moles eat small invertebrates, aquatic insects, worms, mollusks, small amphibians and small fish. The journal Nature calls this species the world’s fastest eater – a star-nosed mole can eat a worm or insect in 120 milliseconds. Its brain decides in 8 milliseconds whether prey is edible or not.

They play an important role in the ecosystem both as a ravenous predator and a source of food for carnivores including hawks, owls, foxes, weasels, minks, skunks, bullfrogs, large fish such as the northern pike and largemouth bass, as well as domestic cats. In addition, by tunneling through most ground, star-nosed moles provide oxygen to the roots of plants that might otherwise be trapped in compacted soil with no oxygen.

The moles are active day and night and do not hibernate in winter. They are more social than other moles in eastern North America and are believed to form small, loose colonies of related individuals. However, we do not know if moles, other than a paired male and female during the breeding season, share a network of tunnels.