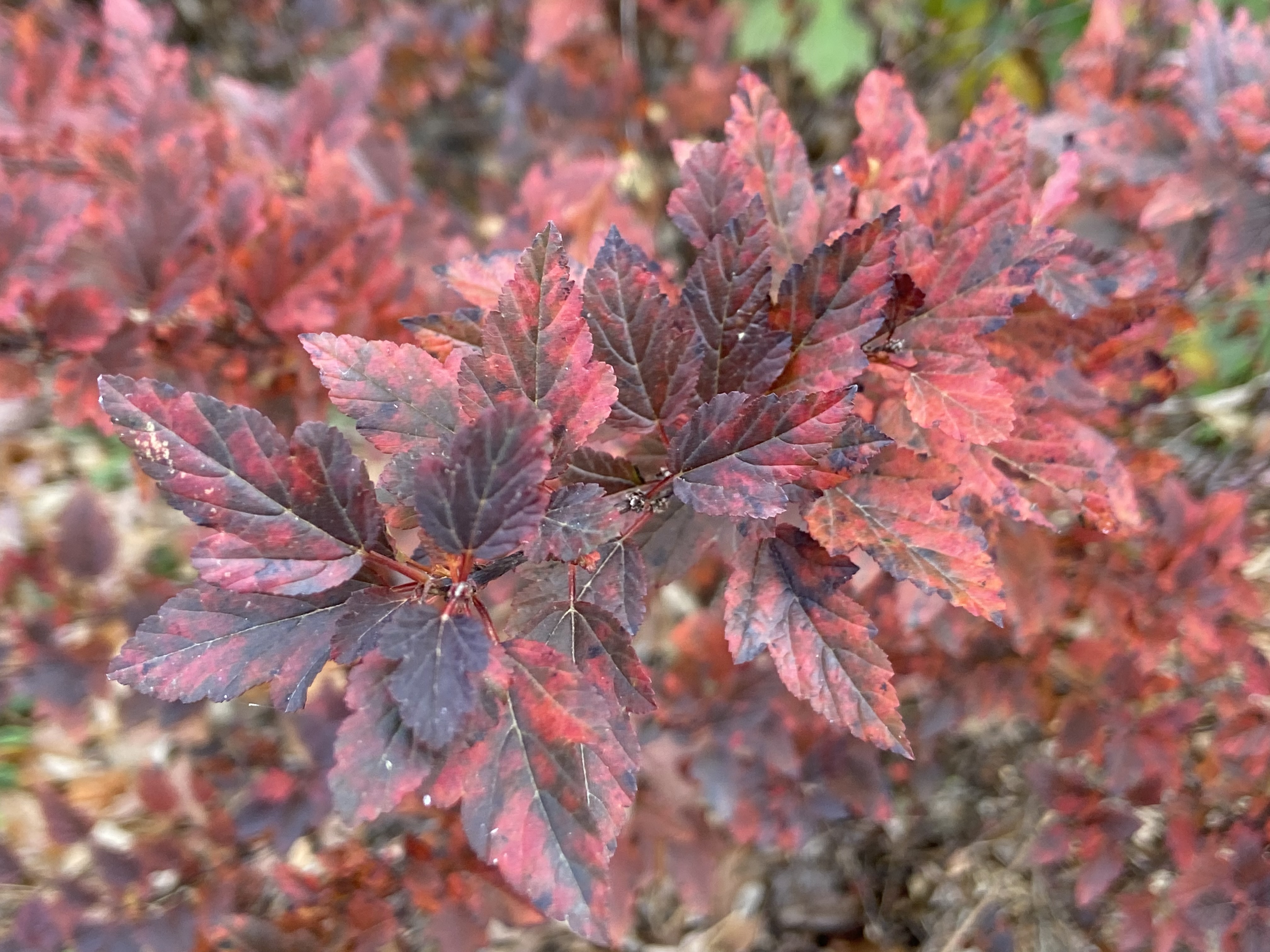 Plant obsessions can run in different directions. Some plant lovers amass a deep collection of a single species – say, iris, roses or hostas. Others go wide — they want one of everything. I’m definitely on the wide end of that spectrum, but I’m moving toward the center. I’ve come to appreciate how a mass underplanting of Southern shield ferns brings cohesion to a shrub border and how a wavy line of ‘Fireworks’ goldenrod provides structure for a loose drift of perennials. I might even be on the cusp of becoming a ninebark collector.

Common or eastern ninebark (Physocarpus opulifolius) occurs across much of the Midwest, Northeast and Mid-Atlantic. This shrub can be found growing six to ten feet tall in a variety of habitats, from rocky slopes to moist streambanks, in our state’s Piedmont and mountains. Despite my goal to establish a multitude of native shrubs in my backyard, it had somehow escaped my notice. I first encountered it at a Wing Haven plant sale several years ago. At first glance, it wasn’t impressive — a few rangy limbs with small medium green leaves. Another shopper saw me studying the gallon-size plant. 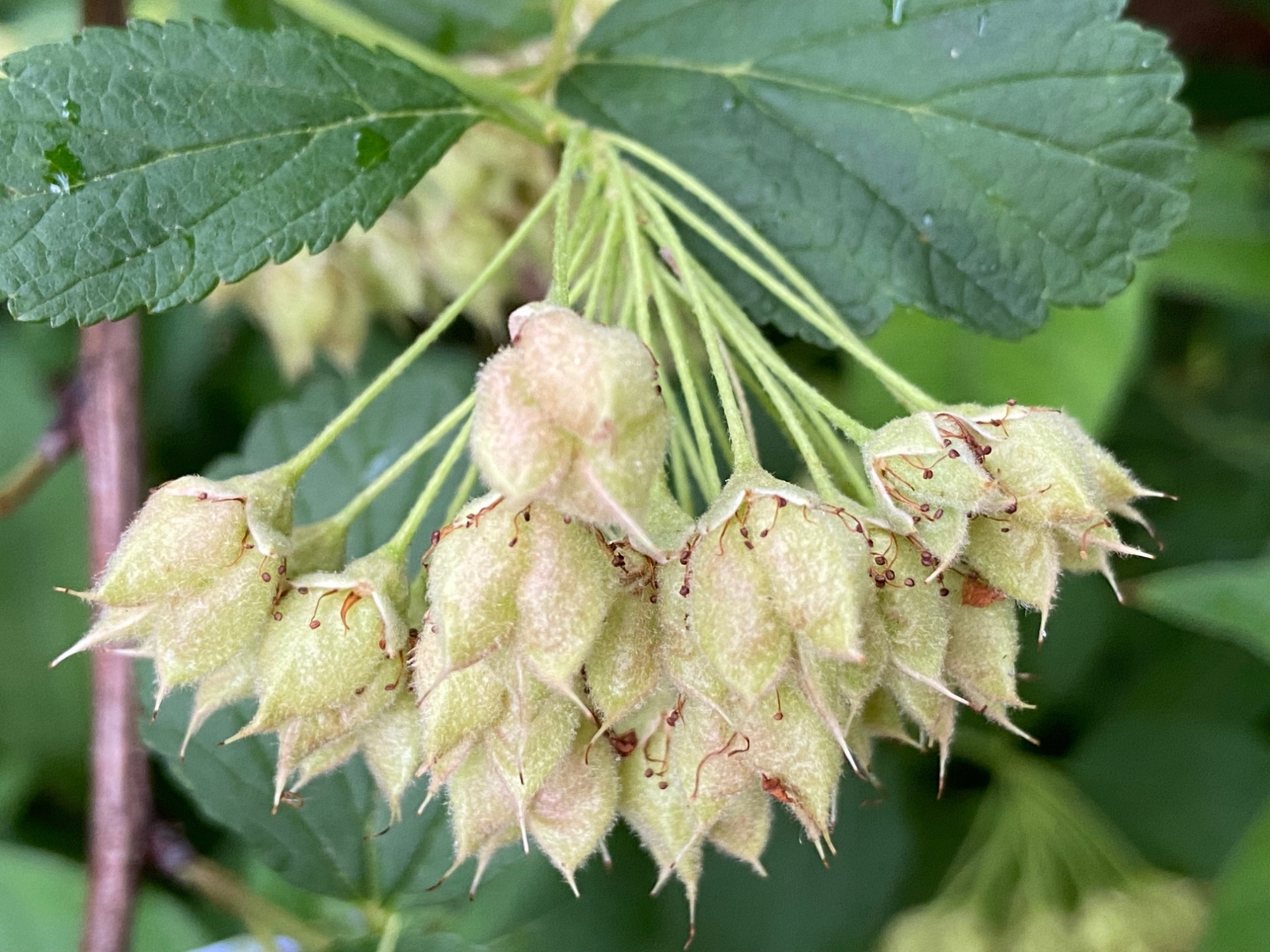 Her conviction got my attention. “Will it do okay in heavy, wet clay with hardly any sun?”  Given such a challenging site, I expected her to back-pedal on that enthusiastic recommendation.

“Absolutely,” she said. She had planted a row of them in similar conditions. “They’re tough as nails.”

How could I say no to this miracle shrub?  After taking it home, I consulted Michael Dirr’s Manual of Woody Landscape Plants. His hot takes are often humorous and generally spot on. He was not impressed with ninebark. After seeing a large collection at an arboretum in Minnesota, he said, “I still came away with the opinion that about anything is better than a Physocarpus.”  Ouch. He had marginally nicer things to say about a handful of cultivars, none of which I’d ever heard of. I feared I’d been led astray by the lady at the plant sale. I stuck the tiny ninebark in a wet, neglected corner. I later moved it to a dry slope with a blast of afternoon sun. We’ll see how tough this shrub really is, I thought. I then proceeded to ignore it for a couple years as I focused on other sections of the yard. 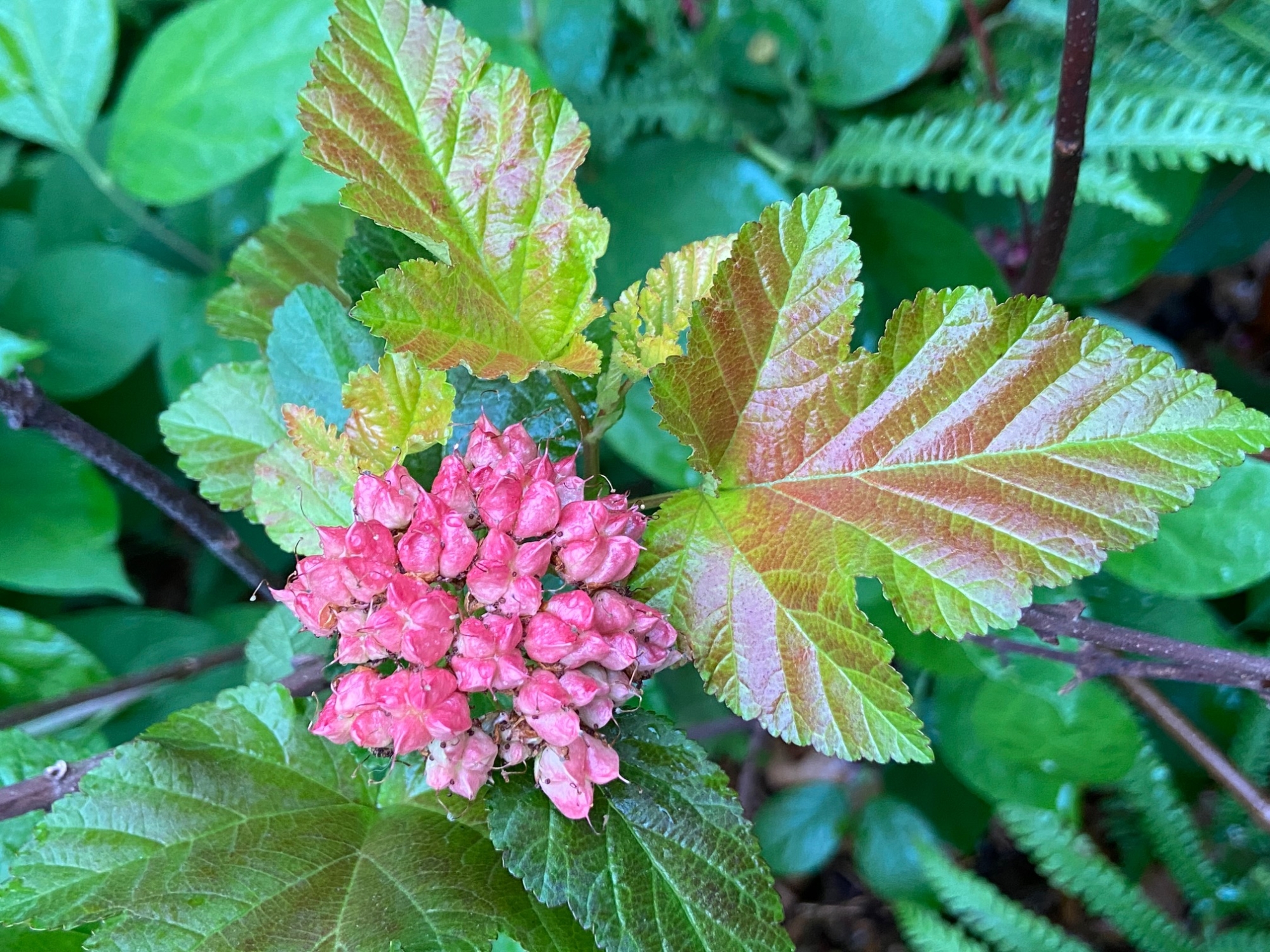 During that time, the ninebark developed graceful, arching limbs with the peeling bark that inspires its name. In spring, it covered itself in clusters of small, white flowers reminiscent of spirea. The blooms are relatively short-lived, but they attract a variety of pollinators and later develop into attractive, bladder-like seed capsules. Their pale green harmonized with the unopened bloomstalks of nearby bottlebrush buckeyes. As they aged, they echoed the parchment of faded blooms on an adjacent oakleaf hydrangea.

Suddenly I was in love. Ninebark, where have you been all my life?  I delved into the world of ninebark cultivars, acquiring several for my garden. They come in a range of sizes and a rainbow of colors – burgundy, copper and chartreuse – which sometimes appear simultaneously on the same plant.

‘Amber Jubilee’ holds an honored position between a Florida flame azalea and a Carolina sweetshrub. In my yard, the citrus hues of its leaves fade by early summer, but the enduring seed pods turn a festive, rosy red. ‘Ginger Wine’ leafs out with a kaleidoscope of brilliant colors before settling into a burgundy that lasts all summer. The foliage deepens and reddens in fall – spectacular next to the fiery red of a chokecherry.

I put ‘Lemon Candy’ next to a yellow-twig dogwood. ‘Little Devil,’ a dwarf version of a dark purple cultivar called ‘Diablo,’ is a nice foil for ‘Little Honey’ oakleaf hydrangea. ‘Diablo’ is used to great effect in the Mellichamp Native Terrace at the UNC Charlotte Botanical Gardens. There, its arching limbs drape over a short retaining wall. The gardens also use ‘Amber Jubilee.’

I’m astounded these – and the numerous other ninebark cultivars – aren’t more widely available and planted. Aesthetically, they rival the ubiquitous weigelas and Japanese spireas, yet I’ve never seen them offered at a big box store. Their availability is sporadic at specialty nurseries and even gardens that offer a good selection of native shrubs.

Maybe a stigma lingers from Dirr’s assessment? Maybe there’s concern about their heat tolerance here in the Piedmont? Maybe they were all the rage when exciting new cultivars first appeared in the early aughts and quickly became passé?

Ed Davis, landscape architect at the UNC Charlotte Botanical Gardens, thinks the public will catch on to their appeal if growers continue to make new and improved varieties available. Native plants are often trapped in this chicken-or-egg conundrum. People don’t choose them because growers don’t provide them, and growers are reluctant to invest in plants that people aren’t demanding.

Like many other native plants, ninebark deserves wider recognition and deeper appreciation.

The straight species (Physocarpa opulifolius), which can be exceedingly difficult to find, is available from Uwharrie Mountain Native Plant Farm (uwharrienatives@yahoo.com).