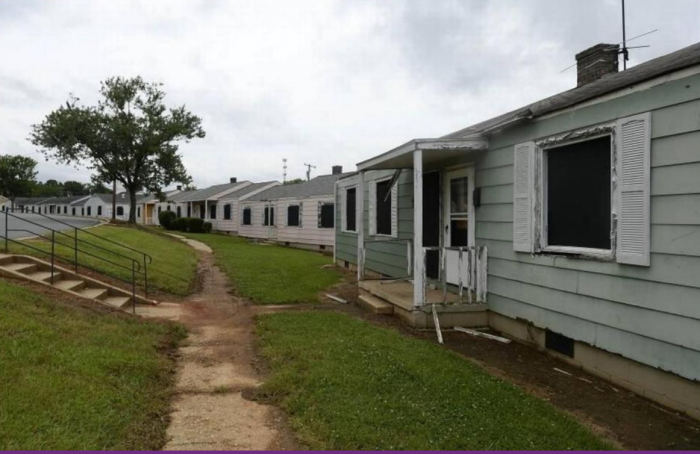 Debbie Williams grew up in Charlotte’s Brookhill Village, a neighborhood of one-story duplex and triplex apartments built for black families in the 1950s. She has watched while its owners let the buildings deteriorate as luxury apartments began rising nearby.

Two decades ago, she moved away. But her mother and sister remained in the low-rent housing community, home to several generations of many families. Williams’ ties to the neighborhood these days, however, extend beyond family. She is working to keep the low-income residents there from being displaced by gentrification in fast-growing South End, on the outskirts of uptown Charlotte.

“There is anxiety and frustration in the community right now,” said Williams, executive director of the Brookhill Community Resource Center, organized a year ago to provide financial classes and other services. “We’ve tried to educate residents on the reality of what’s going on. We’re there to do whatever we need to for the community.”

Now, Charlotte officials are considering a proposed redevelopment of Brookhill Village, which covers 36 acres at South Tryon Street and Remount Road. It’s a part of town where change is clearly coming: half a mile from the light rail and two miles from uptown. New breweries, a rock climbing gym and apartments where a studio rents for more than $1,000 a month have sprung up all around.

The developer asked for financial assistance in order to designate more than half the proposed 324 apartments as affordable for low-income families. City housing staff did not recommend Charlotte City Council approve any funding.

But many council members, disappointed by the recommendation, asked the staff for further review. Increasing affordable housing is one of the council’s top priorities.

“It is already a tragedy in terms of the dilapidation that has been allowed and it would be a further tragedy if the people were removed and erased from the land,” said at-large council member Braxton Winston. “We need to make this happen. We are only going to solve this (affordable housing) crisis if we are able to adapt and think outside our own traditions. If we can deal with this situation, we will be able to better deal with other complex situations.”

In rejecting the proposal, city staff raised several issues, primarily about financing for the project and the ability of the developer to repay the funding. No date has been set for the issue to go back before the city council.

“We would love to see this project move forward and we hope the developer can provide us with the information requested,” said Miles Vaughn, housing services division manager with the  Housing and Neighborhood Services Department.

In the meantime, Tom Hendrickson, a Wake County developer spearheading the proposed redevelopment, to be known as New Brookhill, said he is focused “100% on making this work.”

“We will have that conversation later if we have to have it,” Hendrickson said when asked what he will do if the funding is denied. “(The development) would work as a market rate project. We are committed to making it a mixed-income project.”

In 1950, Charlotte developer C.D. Spangler Sr. built the property and, in a complex ownership scenario, set up a 99-year ground lease for the buildings with another company. In a ground lease, one company owns the ground while another has a long-term agreement to control buildings atop that ground. Years-long legal disputes between the landowner and the now-former leaseholder prevented redevelopment of the property. In the meantime, the buildings were allowed to deteriorate, with many of them boarded up.

Only about 150 of the 418 apartments are now occupied.

Last year, Brookhill Village II LLC, led by managing partner Greg Pappanastos, president of Argos Real Estate Advisors, sold the remainder of the leasehold to South Tryon Community Development Corporation for $792,000. The nonprofit then sold a portion of the leasehold for the same amount to Brookhill Land Lease Ventures LLC,  affiliated with Hendrickson. The developer also assumed nearly $4 million in existing debt on the buildings.

“I dug in deep to see what it took to get all the legal issues settled so we could focus on real estate that would be respectful of the history of the community and the people who are living there,” Hendrickson said of the proposed $65 million development.

Hendrickson initially requested borrowing $4.5 million from the city Housing Trust Fund, along with a private $10 million loan from the Charlotte Housing Opportunity Investment Fund, managed by the Local Initiatives Support Corporation (LISC). A part of a national program, LISC works with the city to secure and provide funding for affordable housing.

Since city staff recommended rejecting his initial funding request, Hendrickson said he has provided additional data regarding financing of the project and is responding to all requests for information about the leasehold agreement and other legal issues. He said he has reduced the amount of money requested from the Housing Trust Fund from $4.5 million to $2.5 million. The property’s ineligibility for a federal low income housing tax credit, which developers use to help cover the costs of affordable housing, prompted his development team to seek the city financing, according to Hendrickson.

Rent in Brookhill Village is an average $475 a month. Hendrickson said many of the nearly 300 people living there now would be able to remain, under his proposed redevelopment plan.

Hendrickson plans to later seek rezoning of about 20 acres of the property to develop for shops and offices.

“This is an opportunity that can’t be left on the table,” said Rev. Ray McKinnon, founder of the nonprofit South Tryon Community Development Corporation and senior pastor at South Tryon Community United Methodist Church, which sits adjacent to Brookhill Village. “It is a plan that is intentionally including the residents who are still there with the understanding that the status quo is no longer tenable.”

But in a fast-changing part of a fast-changing city, even a successful redevelopment that includes affordable housing could be just a temporary fix. If city financing is approved, New Brookhill’s affordable apartments will only be available until the original 99-year leasehold expires Oct. 31, 2049.

As required in the leasehold agreement, all the apartments and any commercial buildings will then become the property of the landowners, a company called Brookhill Land that is affiliated with the Spangler family.

In 2049, said Hendrickson, “I’m sure the city council and landowners will have discussions about the future use of the land.”