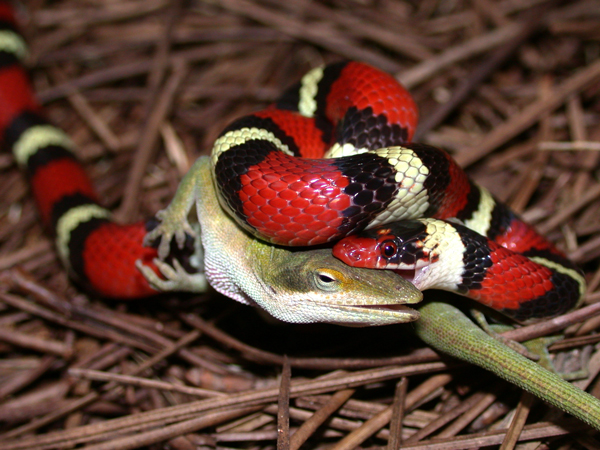 Although some folks find snakes incredibly fascinating, and others shriek in terror and run from them, most people are somewhere in the middle – either casually interested or coolly indifferent. If I see a snake in the woods, I’ll likely get close enough to take a picture and identify it, and then carry on my way. I might pick up and check out small snakes like worm snakes, rough green snakes or red belly snakes. But recently while out with a herpetologist friend, I was convinced to pick up the first large snake I’d ever braved to hold. Fortunately, it also happened to be one of the most docile of all wild snakes, an eastern kingsnake (Lampropeltis getula). 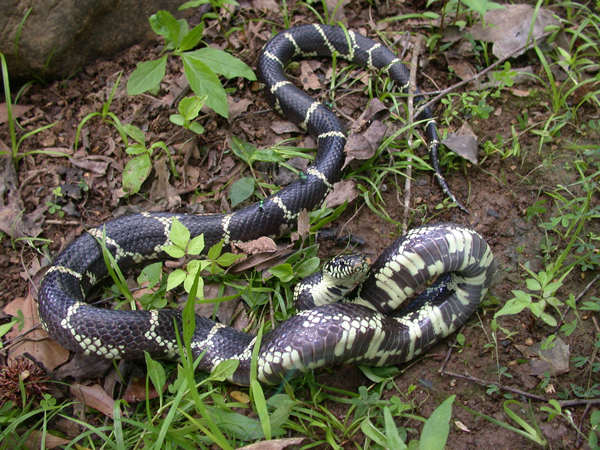 Eastern kingsnakes are fairly large, usually 3 to 5 feet long, predominantly black with a thin chain-like pattern of white or light yellow. They are not poisonous and usually not aggressive. They are constrictors, which mean they kill prey by squeezing it.They earned the name “kingsnake” because their immunity to snake venom means they can kill and eat other snakes. They also eat small mammals and amphibians.

Eastern kingsnakes are found in a variety of habitats but almost always near water. They are fairly secretive, spending most of their time hiding under rocks and logs.

North Carolina is home to two other “royally” named snakes – the scarlet kingsnake and the queen snake. Scarlet kingsnakes are some of the most colorful of all snakes with a pattern similar to the poisonous coral snake with vivid colors of red, yellow and black. Scarlet kingsnakes are a subspecies of the same snake species (Lampropeltis triangulum) as the much different looking milk snake, which is a less impressive gray with brown spots on their backs. Scarlet kingsnakes are mainly found in pine forests in the coastal plain and are rare in the Piedmont. Milk snakes take their name from the incorrect belief that they “milk” cows, because they are frequently found near barns and sheds, where rodents are also abundant. 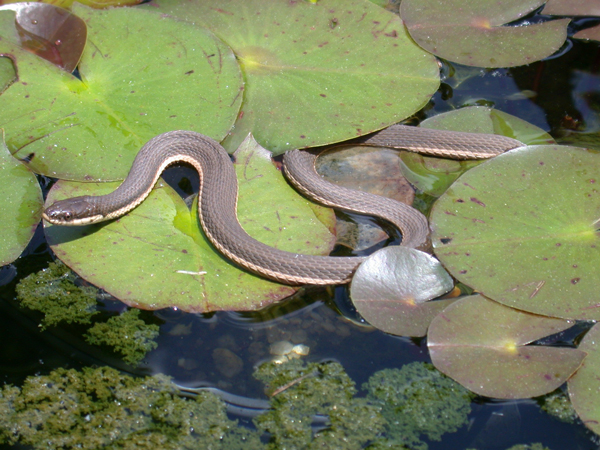 The queen snake (Regina septemvittata) is also a nonvenomous snake found in the eastern U.S. They are dark brown to olive, with yellow stripes, and often confused with garter snakes. They are medium sized water snakes, usually less than 2 feet long, and like to bask on limbs hanging over creeks and streams. Their diet is largely made up of molting crayfish, typically found in streams with good water quality. Water pollution is particularly harmful to queen snakes because it reduces their food source. This has caused an overall population decline of queen snakes and complete loss in some parts of their historic range.

Certainly if you plan to pick up a snake only do so if you are experienced enough to know whether it is venomous. Even a bite from a nonvenomous snake can be painful. If bitten, your kneejerk reaction to pull the snake away can be harmful to the snake, as pulling teeth out can leave them susceptible to infection.

We are lucky in the eastern U.S. to have these species of snakes with stately names, although different habitats and lifestyles. They serve a function in the ecosystem, and they help humans by controlling pests and venomous snakes. We should do what we can to protect them and their habitat, so they’ll be around to perform those services for us and other species.

Special thanks to J.D. Willson of Virginia Tech for these images.