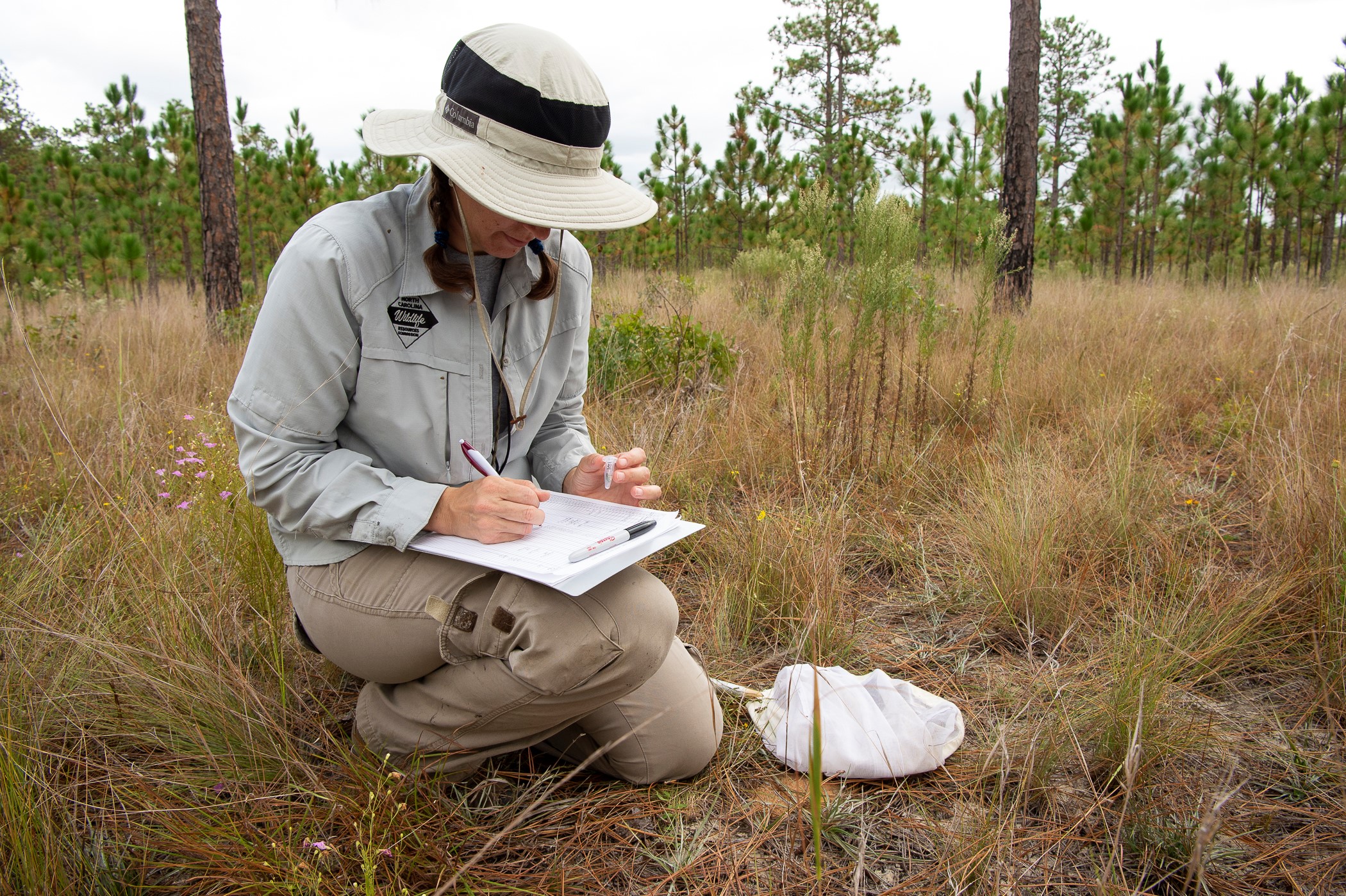 The plight of honeybees has been well documented in recent years – their steep decline due to habitat loss, pesticide use, and disease. The crisis has inspired many people to take up beekeeping in an effort to help stabilize bee populations. Even though honeybees aren’t native to the Americas – they arrived with European colonists in the 1600s – we have come to depend on them to pollinate many agricultural crops.

There’s growing concern that our native bees – over 500 species in North Carolina and 4,000 across the U.S. – are also facing similar declines. Equally unsettling is the fact that we lack the data to know just how dire the situation is.

“We don’t have a solid baseline of what was present 30 years ago, so it’s hard to know what we’ve lost,” said Gabriela Garrison in the March/April 2020 issue of Wildlife in North Carolina.  I spoke with Garrison recently. In her role as the Eastern Piedmont habitat conservation coordinator for the N.C. Wildlife Resources Commission (WRC) and member of the N.C. Pollinator Conservation Alliance, she advocated for a systematic assessment of native bees across the state. Four sites on WRC game lands were selected, to represent the Mountains, Piedmont, Sandhills and Coastal Plain.

In addition to providing a snapshot of the species that occur in each ecoregion, the three-year study will compare bee populations in areas that have been managed with prescribed burns to similar areas where fire has been excluded. The study will run through 2022, but it’s already prompting N.C. State Parks and the N.C. Department of Transportation to consider doing surveys on their own properties.

The WRC study is looking at the state’s natural areas, but there was also a recent study focused on agricultural lands. While honeybees get most of the attention, native bees play an important role in crop pollination, especially on plants that originated in the Americas such as cucumbers, watermelon, squash, tomatoes and blueberries. Those crops are worth over $150 million in this state.

As a graduate student at N.C. State University (NCSU), Hannah Levenson spent four years studying state-mandated pollinator plots installed at 15 of the university’s research stations across the state. Her findings showed that diverse, densely floriferous plots attracted more native bees than plots with spare vegetation, and they harbored fewer pathogens than a single-species plot, such as a monoculture of sunflowers. She also started a project to see if these plots increase the yield on nearby soybean fields.

These studies are the first of their kind across the state. “Honeybees are so well-studied because they’re so easy to study,” Garrison said.  “They live communally in a hive, so they’re sort of a captive audience.” She noted that it’s inherently more challenging to study native bees. Many are active in the landscape for only a few weeks – even a few days – each year. The remainder of their life cycle occurs out of sight – burrowed in their solitary nests underground or in plants or wood. Plus, scientists lack the personnel, resources and access to do comprehensive studies of native bees.

The Great American Bee Count envisions a role for citizen participation to help fill in the gaps.  Hosted on iNaturalist, “this umbrella project combines many existing local and regional bee monitoring efforts in one place to provide a unified platform for all our native bees.”

You can participate. Simply download the app, join the project, take photos of the bees you see, then upload them to the site for help with identification.  It’s a great learning tool for the user, and scientists are increasingly turning to this data for assistance. Garrison gave two examples. A colleague in the mountains sensed he wasn’t seeing as many bumblebees as he once did, so he now checks iNaturalist for other reports in his area. Sam Droege, a wildlife biologist at the Patuxent Wildlife Research Center in Maryland and a driving force behind many grassroots surveys, uses it to keep tabs on hot spots across the nation for reports of the rare species he targets.

Even though bees can be harder to find and identify than birds, this crowd-sourcing of information from citizen scientists harkens back to the start of Audubon’s Christmas Bird Counts. That effort began in 1900, when populations of many species were in free-fall.  Being able to monitor long term trends has helped direct conservation efforts. It feels as though we’re at a similar, critical juncture with our native bees. What we do now with the Great American Bee Count could have the same impact in the coming decades.

Next month, get to know some of our common native bees.  In the meantime, check out the identification guide The Bees of North Carolina: An Identification Guide | NC State Extension Publications developed by Hannah Levenson and NCSU professor Elsa Youngsteadt.