The six shad species of N.C. 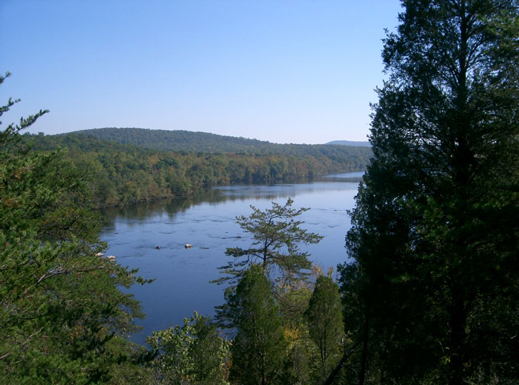 If you’re like me, this warmer weather is more than enough encouragement to spend more time outside. Days are getting longer and bulky winter clothing is replaced with t-shirts and flip flops. Time to start thinking about heading to our lakes and rivers for water-based recreational activities, and for many of you, the activity at the top of your list of favorite warm-weather pastimes will involve a line and a pole.  Fishing is a very popular pastime here, and for good reason. We are fortunate to have a variety of fish species and a number of high quality streams and lakes to fish in.

Last fall, I was invited to join some friends on a fishing trip on Lake Tillery. We began our day before sun up and cast our nets to catch an interesting little bait fish – the shad.  North Carolina actually has six different species of shad:  the American shad, hickory shad, blueback herring, alewife, threadfin shad, and gizzard shad. Lake Tillery has threadfin and gizzard shad in it. The shad we caught were most likely threadfin shad, Dorosoma petenense, which are commonly found in large streams and reservoirs.These shad are relatively small, the majority of them no longer than 1 inch, and are usually caught for bait to catch other fish. Threadfin shad are believed to have healthy populations and are stocked in many places as forage for other game fish. We used these little fish to try to tempt largemouth bass to our lures.

The American shad, hickory shad, blueback herring and alewife are all types of herring, and are all anadromous.  This means they spend most of their life at sea and come to fresh water to spawn, or reproduce.  In some parts of their range, they may travel more than 500 miles upstream and inland to their spawning grounds, many returning to the same spawning grounds every year. Herring are a group of thin, silvery fish that are found in temperate waters of the North Pacific and Atlantic. They are a schooling fish and forage primarily on plankton, but will also eat other larger sea life as they grow. 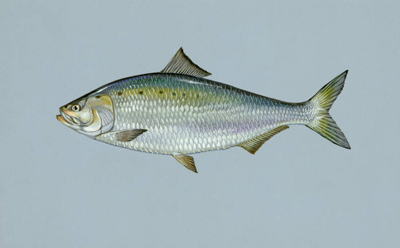 The American shad is the largest member of the shad and herring family. They have excellent hearing, an adaptation very useful to them as a popular prey fish. They have special structures and hairs in their ears that allow them to sense vibrations very acutely, in addition to having a specialized swim bladder to hear even the high pitched vocalizations of dolphins, which unsurprisingly prey heavily on shad.

American shad, and other anadromous shad and herring, are largely in decline.  In our region, American shad are not believed to occur north of Blewett Falls dam between Anson and Richmond counties. Their populations are decreasing, and the reason for this decline is a topic of some debate. Many factors may be at play, including overfishing, pollution, dams  that impede their migrations, climate change, salinity intrusion, and more.

Shad have been a popular food source since early colonial times, but in recent years their overall decline has greatly affected the herring and shad industries on the coast of Carolina. At one point, there were many neat local food establishments called “shad shacks” all along the east coast, which specialized in frying up these tasty, if somewhat oily, fish. They are an excellent source of nutrients, high in omega 3, and usually low in toxins like PCBs and dioxins. Unfortunately, nowadays shad shacks have all but disappeared.

The US Fish and Wildlife Service and the NC Wildlife Resources Commission are working to restore shad populations, including the restocking of over 8 million American shad in the Roanoke River. They have also increased regulations, and have now limited the taking of American shad in the Roanoke River from 10 fish down to 1 fish per angler per day, and prohibited the taking of Alewife and blueback herring. Hopefully with continued research and conservation efforts, shad populations can recover. It would truly be a shame to lose these fish, and the recreation and industry surrounding them, as they were historically found so pervasively and have an important place in the heritage of our state.