Snow in the South 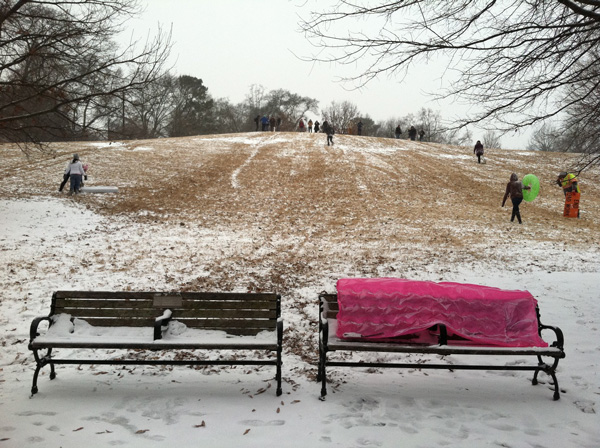 Is there anything more diverting for a Southerner than a couple of inches of snow? The mere suggestion of the slightest chance of a flurry whips us into a frenzy. When my niece and nephew were younger, they’d flush ice cubes down the toilet then go to bed wearing their pajamas inside out and underpants on their head, harboring visions of snowmen, sleds and hot cocoa instead of French and math. In the days leading up to the recent storm, the weather models seemed so certain, they didn’t need to invoke these superstitions. Charlotte was going to get slammed. We trusted. We believed. And so it came to pass – three glorious days of freedom.

Adults, of course, channel their anticipation by rushing to the grocery store. I joined the hordes last month in the hours before the snow that paralyzed Atlanta. Even though I had plenty of bread and milk on hand, I succumbed to an unbearable urge for box of mac and cheese and cookie dough. What I really needed to procure was rock salt for my steps, but I had taken leave of my senses. Nothing quite so practical ever crossed my mind. This lapse in judgment later forced me to part with a precious amount of sea salt.

At least I remained level-headed enough to cancel an appointment for a haircut on the other side of town. At the time, I felt like a wimp – the first flakes hadn’t even started to stick – but this decision would later save me from a cold and slippery purgatory, the hellish commute now known as “Snow Jam 2014.” This event made Atlanta the butt of countless jokes. A whopping two inches of snow produced all sorts of mayhem. Children were stuck on buses till midnight.  Some commuters spent the night in their cars while others abandoned them after running out of gas. A baby girl entered this world in her parents’ backseat alongside I-285.  Chaos descended on our car-dependant city. 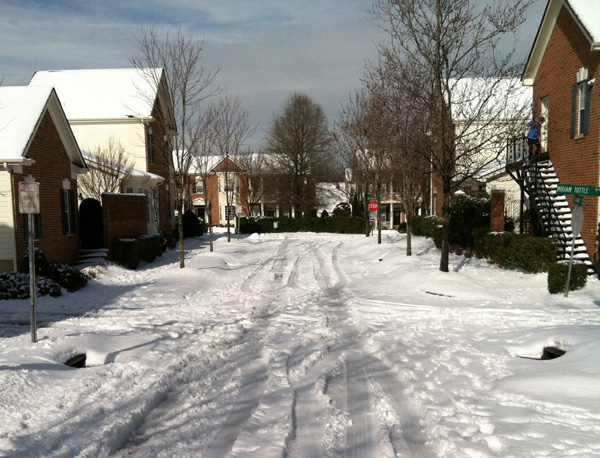 My car remained parked in front of our condo. I headed to Piedmont Park on foot. There was something of a pedestrian rush at the entrance on Fourteenth Street. People were giddy. We had been released – from our jobs, from our classes, from our cars, from our day-to-day responsibilities. People were laughing, talking, slipping, sliding, taking pictures, and congregating at the top of the long slope near Tenth Street.

There were lots of proper sleds – rectangular racers or circular saucers in neon shades of plastic.  The old-school design with wooden slats and metal runners seems better suited to packed surfaces and deeper drifts. We had so little snow, it hadn’t completely obscured the tufts of flat-growing Zoysia, but that didn’t stop the masses of desperate sledders. The urge to be outside, the urge to surrender oneself to the velocity of this rare event, inspired all sorts of creativity.  Sleds were fashioned from cardboard boxes, plastic storage bins and roadsigns. The guy on a stopsign came to rest inches from a tree, an irony we both found hilarious. Another guy trudged uphill in the gloaming with a bright orange sign that cautioned Smoke or Fog Ahead.

A handful of kids had actual snowboards, but many people improvised with recreational equipment more useful in the South.  I saw a range of beach paraphernalia. A couple took turns blowing up a pool raft. Another one lay draped and deflated across a bench at the bottom of the hill, as if its owner had lacked sufficient lung capacity or punctured it on a root or rock. Several people tried their luck with kiddie pools and boogie boards. My favorite example of Southern repurposing was the guy sitting at the top of the hill in his kayak, waiting for the snow to buoy his fiberglass watercraft.

Some people simply launched themselves into a sitting position and slid on the seat of their pants.  The excitement made us all a little mad. We abandoned pretense and indifference. Goodwill swirled around us like the flakes of snow. People shared rides on makeshift sleds, took photographs for one another, and urged each other back uphill for another run. A bond had formed among us, those of us lucky enough to be congregating in a snowy park instead of shivering in our snowbound cars or fretting over the whereabouts and safety of our loved ones.  In the park, we were wild with delight. This crazy Southern snowfall brought out the best in us.  I was reminded of Henry David Thoreau’s famous quote: In wildness is the preservation of the world.