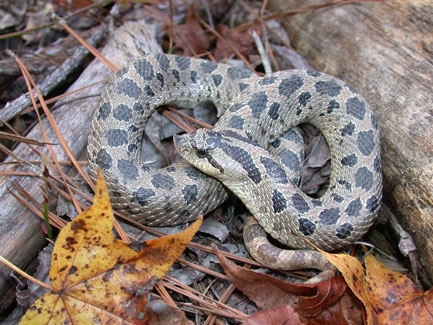 Last week, Ruth Ann Grissom’s article focused on seed collection of longleaf pines. Few would argue with the fact that the longleaf pine ecosystem is definitely one of the most beautiful and diverse there is, with a variety of rare and really cool plant and animal species. Unfortunately, longleaf pine forests and savannahs are also a dwindling ecosystem. Once covering a vast area along the southeastern United States, they are now down to only about 3% of their original range. As a result, a number of the really incredible creatures found in these distinctive ecosystems are becoming rarer and rarer, as well. This week, I met another of these interesting species.

Southern hognose snakes (Heterodon simus) were historically found in the sandhills and coastal plain from North Carolina south to Florida. Their original range included Alabama and Mississippi, but none have been documented in either state for nearly 40 years now. In the states where they still persist, which include North and South Carolina, Georgia and Florida, their ranges are patchy and isolated. Because they spend a lot of time underground, they are not a well understood species, and it is believed that invasive fire ants have contributed to their decline, but certainly the loss of the longleaf pine ecosystem has played a huge role as well.

If you’ve ever seen a hognose snake, you’d certainly remember it. They are called hognose literally because their nose is like that of a hog – flat and pointed upward. They use this for digging in sandy soils, for toads and other prey. Southern hognose snakes look very similar to the Eastern Hognose Snake (Heterodon platirhinos), which is much more common. Although they vary in their pattern and color, most southern hognose are varying shades of yellow, brown, black and gray, whereas eastern hognose can also have orange or reddish mixed in or may be almost solid grey or black. Southern hognose typically have alternating dark brown or black blotches on a lighter background. One good way to tell the difference between southern and eastern is that on the underside of the southern hognose both the belly and tail are light white or tan color, whereas only the tail is light in eastern.

Many people call hognose snakes “spreading adders” because when threatened they put on a display where they flatten out their necks and hiss and feign striking, making them look similar to a cobra. However, they are rear-fanged snakes and are technically not venomous, but use their rear fangs on smaller prey once it is in their mouth. There is some debate but it is thought that the fangs may be used to pop and deflate toads to make them easier to eat. Hognose snakes also may play dead, rolling over on their belly and letting their tongue stick out.

Ruth Ann Grissom wrote in her last article about longleaf seed collection, and I think that the fate of southern hognose snakes is just one of the many reasons why longleaf restoration is so important.  Ultimately the restoration of southern hognose and so many species will be invariably linked with the valuing and restoring of these incredibly beautiful and unique longleaf ecosystems.