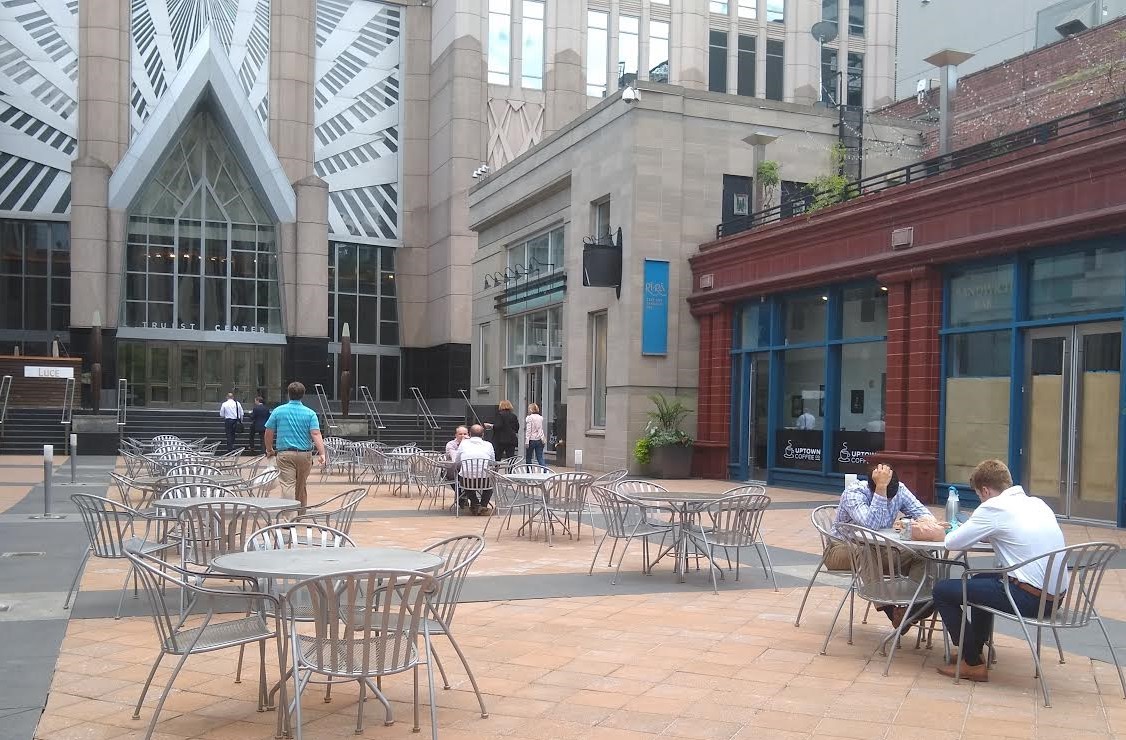 “The key to its success will be for residents and leaders to dare to dream big ,” Chris Beynon, Center City Vision Plan team leader, MIG consultants, Charlotte Business Journal, August 9, 2019.

“We will see our major employers on a timeline to restore the use of office space. It depends on the workforce coming back.” - Michael Smith, CEO-Charlotte Center City Partners, Podcast interview, February 11, 2021.

Maybe I’m just a worry-wart, but I can’t help thinking that the future for Uptown (and South End)  might not be nearly as rosy a picture as the project team’s been painting since work began two years ago on the Center City 2040 Vision Plan.

Looking beyond the usual barrage of real estate hype that’s so quintessentially Charlotte, I’m catching some sobering messages from the better minds of urban researchers and market analysts whose province lies outside our local bubble. These are the folks who have a solid grip on national trends affecting Charlotte - especially the lingering aftereffects of the Covid-19 pandemic, and how changes in the ways we work could reshape our nation’s city centers.

That’s part of what joggles my brain as I read and re-read the 25 page preview of the upcoming Center City Vision Plan, or as some of the team’s messaging folks like to call it: "All In 2040".  But maybe that’s just my inner angst playing games with me, and my anxiety will soon subside. (NOTE: The All In 2040 Center City Vision Plan should not be confused with the 2040 Comprehensive Plan approved by City Council last month).

I discovered the preview of All In 2040 almost by chance in June, although I soon learned it was quietly posted on Charlotte Center City Partners' website in March. Earlier this  week the project team informed the Planning Commission a draft of the final document would  be released next Monday for public comment, with the added anticipation to go before council for further consideration and possibly a vote in October. (A short time frame such as this for public participation and committee review should give anyone some cause for angst.)

The project team also showed the commission an updated wish list of implementation and program elements, what the planners call  “strategies and recommendations”, along with an  eye candy portfolio of seductive renderings. Of  interest is that some bear a striking likeness to the images we saw in 2010, when the last vision plan was done.

One slide shows a possible Blue Line and Silver Line rail hub where the tracks cross 11th street  next to the yet-to-be-completed First Ward parking deck; another shows where a new Second Ward high school and Brooklyn History Museum might locate - and so forth. According to CEO Smith, they’re part of a package of eleven “focus” areas “ripe for catalytic transformation.” 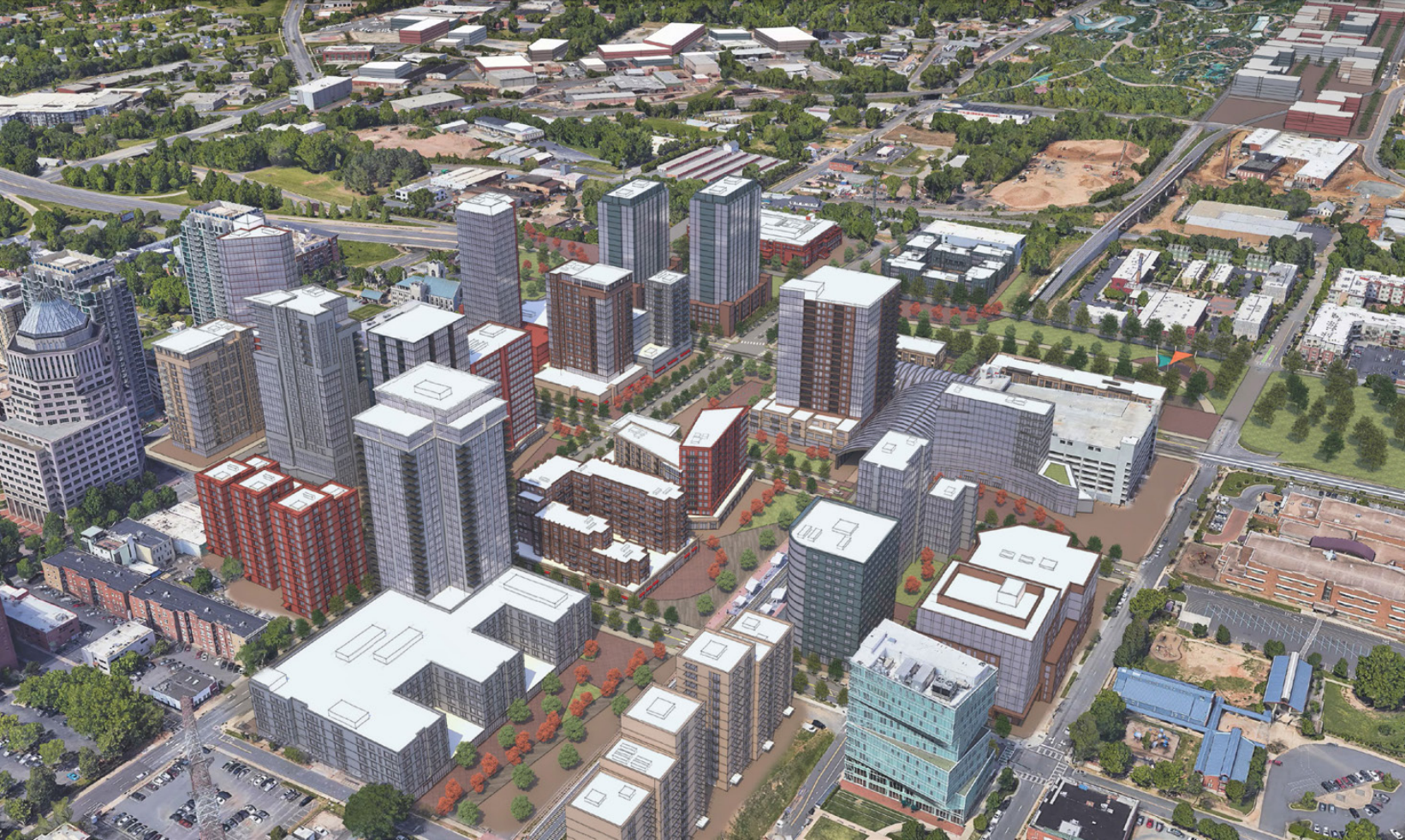 The plan doesn’t solely focus on physical developments like new buildings and parks, or transit options such as the new rail lines. Where the plan breaks new ground is its social emphasis, geared in large part to equity initiatives of benefit to underserved neighborhoods and populations (i.e. West Side and North End) as followup from the 2019-20 Black Lives Matter movement in Charlotte. In this regard, All In 2040  echoes the aspirational framework scoped out by the Planning Department for the recently approved 2040 Comprehensive Plan.

But we don’t know much more than that, because the full wish-list won’t be forthcoming until the full draft is released. We do know that dense infill development is proposed on the near West Side to replace the West Trade street / I-77 jumble of over-size exit ramps, and we know that CEO Smith is excited about launching a Center City Equity Fund to “invest in underinvested neighborhoods, and build a mix of affordable and workforce housing while preventing displacement.” But, alas, few other details have been released.

Nevertheless, huge question marks facing uptown have been omitted from the All In 2040 planning process — at least up until this point —  despite 16 unsettling months of pandemic shock waves. Specifically, what happens when the Covid-19 guidelines and restrictions are lifted, and downtown workers face the spectre of returning to their office cubicles? That’s where my angst really kicks in. The final plan could address these points; we haven't seen it yet.

Guidance comes from the national front, where substantial survey research underscores what we’ve anticipated all along - an unprecedented shift to hybrid work schedules. A survey from a June 12 feature article in the Wall Street Journal tells us that a lopsided 71% of those working remotely during Covid-19 said “losing flexibility was a source of anxiety about returning to the workplace," while only 18% said they would prefer to work full time at the office. Most significantly, a whopping 61% said they would prefer to work from home 2-3 days per week.

Diane Hoskins, co-CEO of Gensler architects, a corporate-intensive design firm with over $1 billion in annual revenues and a branch office in Uptown, offers a similar rendition at a recent Urban Land Institute forum: “What the data shows us is that 15 to 20 percent of people want to be in the office 100 percent of the time, and 10 to 15 percent of people want to work from home 100 percent of the time. The rest want flexibility, or what we’re calling the hybrid office.” Extrapolating this and similar survey results to the Charlotte context means somewhere between 60% to 75% white collar folks on the hybrid time clock. That’s a pretty radical downsize move. It’s not what the planners and boosters want, but it may be unavoidable.

Can you picture the consequences of this happening in Uptown? Aside from the office towers above, what would the ripple effect be on ground floor leases, especially the impact on  hundreds of eateries that dominate at curbside on Tryon Street, South College and portions of the other commercial corridors? (And to be honest, lunch traffic is really the only time when Uptown shows signs of vibrant street life during the traditional five day work week; but that’s a whole other discussion).

What about the conference and hotel trade? Will conferences be fewer in number and lower in attendees because Zoom viewing will be the preferred option for work-at-home parents or other care-givers, or any one else who would welcome an alternative to the cost and time-hassle of long-distance travel and the interruption of their domestic needs?

And how activated will Tryon Street be, if, on a given day of the week, most of Uptown’s office work force is having lunch at home on their backyard patios?

Last week, a well-researched article in the New York Times, titled “The Downtown Office District was Vulnerable Even Before Covid” advanced a proposition one might call the “dullness factor.” Contrary to popular perception, dullness is pretty much proportional to square footages, or building footprints, when office tower uses dominate. The extreme cases, rated above 75%, are San Francisco, Boston and Washington D.C., where a dense pattern of office buildings has gobbled up large swaths of land.

Relative to the 50 largest U.S. cities, Charlotte lies somewhere in the middle third at 48%, according to the attached bar graph from the article.  One can argue either way whether falling below the 50% level puts Charlotte in safe harbour as the winds of Covid-19 change. But that’s exactly the kind of argument our community should be engaging in. How odd that All In 2040 in its preview format has completely ignored the hybrid factor.

Visioning exercises, being what they are, always reach out to the community to get a quick reading of the public pulse. That brings to mind a question posed by the MIG’s Chris Beynon, the consultants’  team leader: “What do you love most about Center City?” Frankly, my love affair is a bit topsy-turvy right now (other than delighting at toddlers’ giddy laughter when they skip through the water jets at Romare Bearden park).  But I know that I care enough to ask some basic questions. 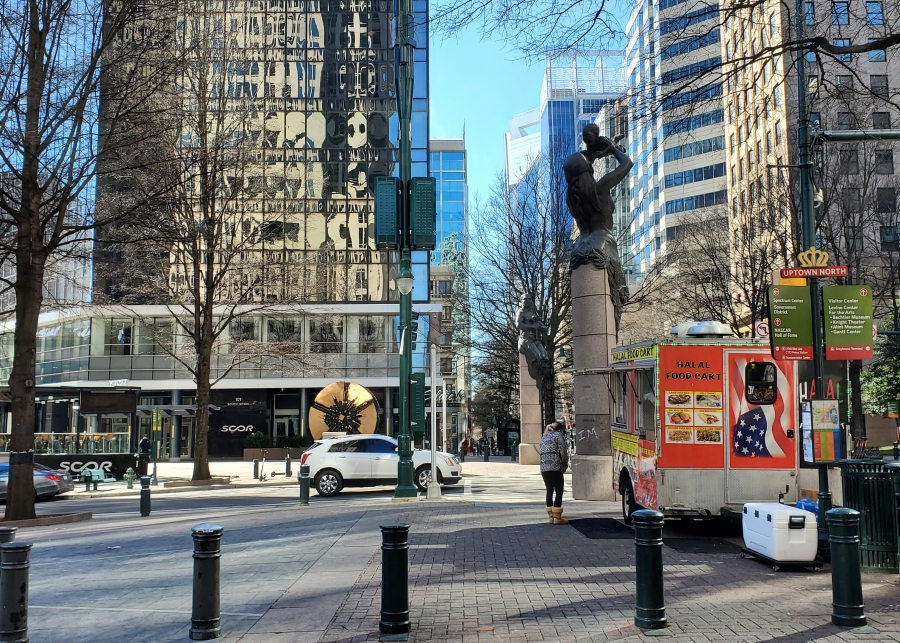 Uptown was largely empty this winter, with its 120,000 or more daily workers absent. Photo: Ely Portillo

How can Uptown survive the 3-day work week? Part of the answer is simple: This plan awaits input from city leaders and an eager public-at-large. Collectively they can seize the opportunity in the coming weeks to recalibrate a 2040 vision which might otherwise be seriously out of focus. With a hefty $600,000 consulting allotment and the plan’s release in draft form, there is no better time than during the comment period to entertain a different set of variables which could address the pros and cons of an impending hybrid work environment. This could open the door to thoughtful scenarios based on relevant themes along such  lines as “Repositioning, Resilience and Recovery.”

Sure, we can still “dare to dream,” but in a more salutary manner, where all stakeholders are given a seat at the table - including small entrepreneurs and active voices from those who live, work and play in the twenty-one neighborhoods contiguous to Uptown. Isn’t that what “All In” is supposed to be all about?

Gosh. What better way to purge myself of this yawning inner angst.

Martin Zimmerman is a longtime Charlotte urbanist who cycles to Center City from his home in University City.