Trails, roads, rails and sky: The changing physical connections that knit our region together 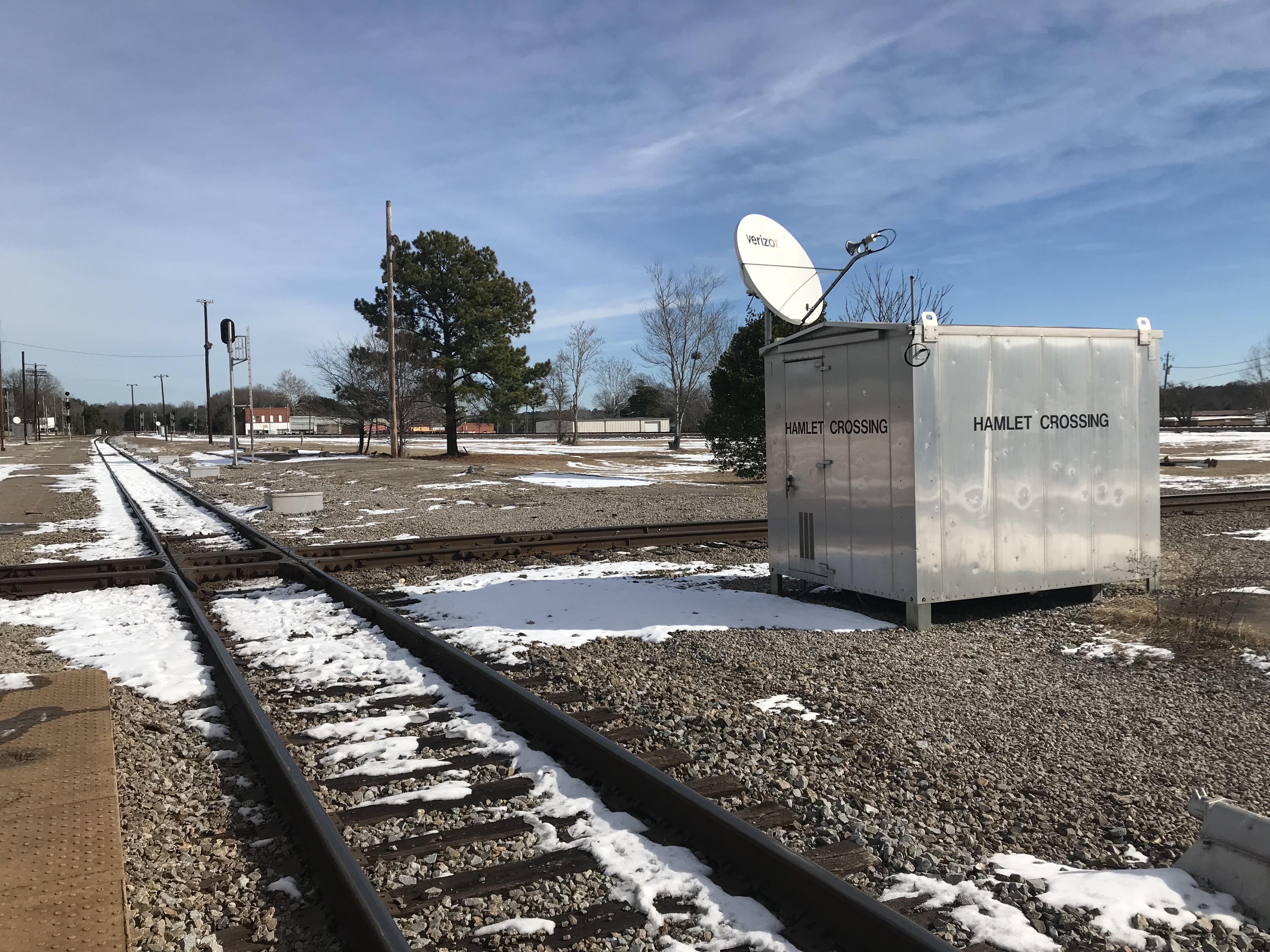 “Memorandum of things to fetch for the family,” begins a page from May 1770 in William Sample Alexander’s journal: “1 raim of good writing paper … 2 case bottles full of rum ½ gallon each …. 3 bibles … 4 lbs coffee.”

Scribbled below, a long ledger notes the prices of tobacco, racoon furs and spices beside the names of neighbors and a list of aunts and uncles to visit in Pennsylvania. Alexander, 19 years old, was headed out on his first trading trip from the North Carolina backcountry to the ports of Philadelphia. Through a series of broken spokes, river ferries and tavern inns, Alexander and his wagon train could cover 20 miles on a good day.

They inched past the regional hub of Salisbury and the Moravian settlement of Wachovia, then into the mountains following the ridges of the Appalachians of Virginia and Maryland into the established settlements of York and Lancaster, Pennsylvania.

The trip from Charlotte to Philadelphia took more than a month, but it was easier to reach than the port cities in North Carolina, where luxury goods like coffee, tea and linen would arrive. Water connected the world in those days, but with no navigable rivers linking the backcountry to the ocean, traveling by land was the only option.

Over the next two centuries, a growing web of infrastructure and physical connections - both within the wider region and between the region and the outside world - would have a profound effect on where growth went, and where it stayed away from. People and industries in the Carolinas Urban-Rural Connection study area followed trading paths, railroads, highways and, now, air service.

By the 1770s, the Great Philadelphia Wagon Road was one of the most developed and well-traveled inland highways in the colonies. Originally a Native American trading path, European settlers started clearing trees and fording rivers along the trail, making it easier for wagon traffic to pass. Communities of Scots-Irish and German settlers sprung up along the route as settlers pushed further and further south. Back in the 1750s, Alexander’s parents had done the same, leaving Pennsylvania for land of their own near a new settlement south of Salisbury on the Sugar Creek that would come to be called Charlotte.

Family ties kept trade and travel along the Great Wagon Road brisk through the early 1800s as the colonies became a nation. Settlers continued further south, carving out better trading paths to the closer ports in Charleston.

But as Charlotte grew from a settlement to a town, it remained cut off from eastern North Carolina. While other states invested in canals and roads, the plantation owners in government offices in Raleigh clung tight to their pursestrings. The stifled economy led young farmers to leave as they looked to cheaper land in the new territories of Alabama and Mississippi. Northern journalists visiting North Carolina in the 1820s dubbed it the “Rip Van Winkle” state, because it seemed to stand still.

By the 1840s, business leaders in Charlotte were growing tired of the standstill. Weekly newspaper headlines of railroads bringing economic booms to Northern cities and bumpy stagecoach rides along muddy paths started to grate. A bill for the mountains-to-sea railroad had been floated in Raleigh a few times but never seemed to get anywhere thanks to infighting between the Whigs and Democrats. So a bipartisan group of Charlotte business owners decided to take matters into their own hands, raising enough money to build a line south from Charlotte to Columbia to connect with South Carolina’s new Charleston-to-Columbia line.

The railroad cut the trip to Charleston from a week to 24 hours. And once one line was in place, others grew to connect. The North Carolina Railroad in 1854 connected Charlotte to Raleigh - and spur lines to Davidson and Lincolnton replaced old stagecoach routes. Whole towns like Rock Hill sprung up seemingly overnight.

When the Civil War broke out, Charlotte’s place as a strategic inland hub convinced the Confederate government to build its Naval Yard there, bringing industry to what had been,  aside from a brief gold-mining boom in the 1830s, a purely agricultural and trading town.

As one of the few Southern cities escaping the Civil War with no major damage to its rail lines, Charlotte drew business and people from devastated areas. By 1880, connections to Atlanta and Wilmington cemented Charlotte as the main trading hub of the region. Between 1860 and 1880, the city’s population tripled to more than 7,000 people, overtaking the colonial hub of Salisbury.

Industry grew rapidly along the lines, in both Charlotte and surrounding towns. As a cotton-growing region, textile mills were a natural fit. The coming of electricity in the early 1900s and a steady stream of migrant labor from struggling Appalachian valleys helped mills to grow in all directions along the railroad lines, springing up from Shelby to Kannapolis to Fort Mill to Lancaster. Charlotte, at the center of it all, became where the mill owners kept their money.

Railroad lines changed the region’s growth patterns. Towns without easy access to rail remained rural, while rural villages along rail lines grew into proper towns. When the Charlotte-to-Atlanta line opened in 1873, Gastonia was just a small rail depot. By 1900, about 5,000 people would live there. In the eastern part of the region, Stanly County, with its rougher terrain, would be without a rail line until 1890, remaining more agrarian and without a comparable large town.

Just as the headlines of railroads had captured boosters’ imaginations in the 1840s, the promise of the automobile did the same in the 1910s. With a patchwork of dirt and gravel roads managed by each county, long-distance car travel still wasn’t feasible for more than a decade after the first Model T rolled off the Detroit assembly lines. So when Charlotte lawyer Cameron Morrison campaigned for governor in 1920, his promise to “use every faculty I possess to help put a policy through the General Assembly which will result in the speedy construction of a great system of highways,” resonated.

Under Morrison’s leadership, the state passed $65 million in bonds for roads. By 1930, more than 3,500 miles of paved concrete and asphalt roads crisscrossed the state connecting towns like Salisbury and Statesville, Gastonia and Lincolnton. The first of these four-lane highways, Wilkinson Boulevard, opened in 1926, connecting Charlotte to Gastonia, now a thriving mill city of nearly 13,000.

While some of these new roads filled gaps where railroad spurs had not been built, many followed the same general path of the railroad lines, building on the economic growth of the towns that had sprung up there 60 years prior.

While the Great Depression put the brakes on the car industry for a while, investments in infrastructure didn’t stop. Still small, the aviation industry was beginning to grow, though pilots had to use a patchwork of small landing strips scattered haphazardly throughout the state. In Charlotte, after a long campaign by Mayor Ben Douglas, the Federal Works Progress Administration helped build an airfield on Charlotte’s west side. During World War II, the Army would use the field as an air base, connecting the Charlotte region to a worldwide network.

After the war, highway building took center stage again. Divided highways like Independence Boulevard, opened in 1949, moved cars full of families headed for the beach and trucks full of black-and-white TVs,washing machines and other modern luxuries through the region quickly. Interstate highways like I-85, opened in 1958, and I-77, completed in 1976, reduced commute times and connected the Charlotte region with other metro areas.

They also made it feasible for Charlotte workers and businesses to move away from the center city. In smaller towns throughout the region, downtown traffic slowed as retail businesses moved off Main Street and towards interstate exits.

Still, the patterns of growth put into place by the railroads a century before remained strong. Industrial and residential growth continued to fan southward along either side of the original Charlotte and South Carolina rail line, while the northern suburbs toward newly built Lake Norman grew slowly until I-77 opened in the late 1970s.

Meanwhile, regional ambitions turned global and Charlotte leaders turned their attention to Douglas Municipal Airport. With a growing financial services and headquarters sector, Charlotte needed to be better-connected to the global economy. After becoming a hub for Piedmont Airlines in 1979, air traffic picked up. In 1987, Charlotte added direct flights to London, followed in 1990 with service to Germany.

Today, more than 700 flights depart from Charlotte Douglas daily, connecting both the city and the wider region to the world. That includes nine non-stops to Philadelphia - less than a two-hour flight, on a good day. 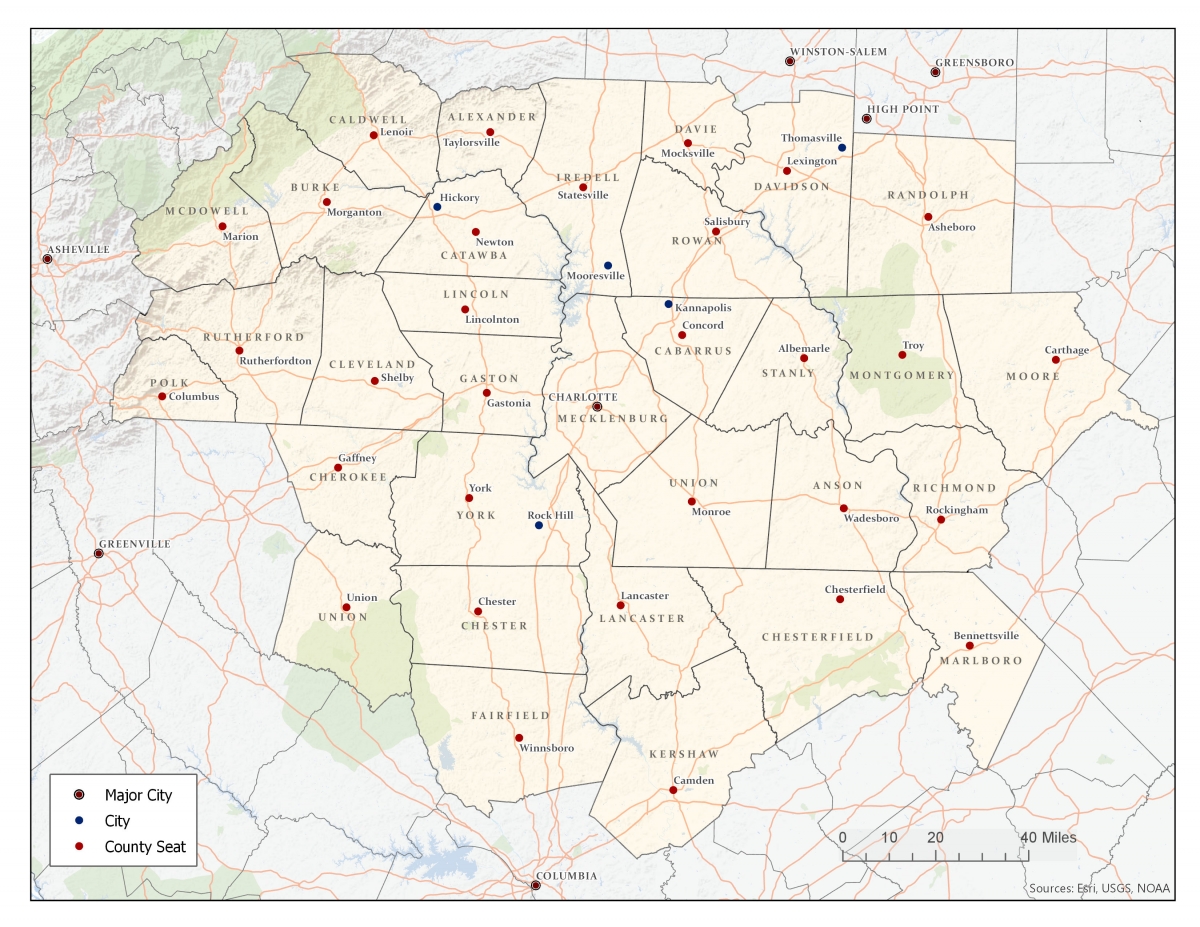