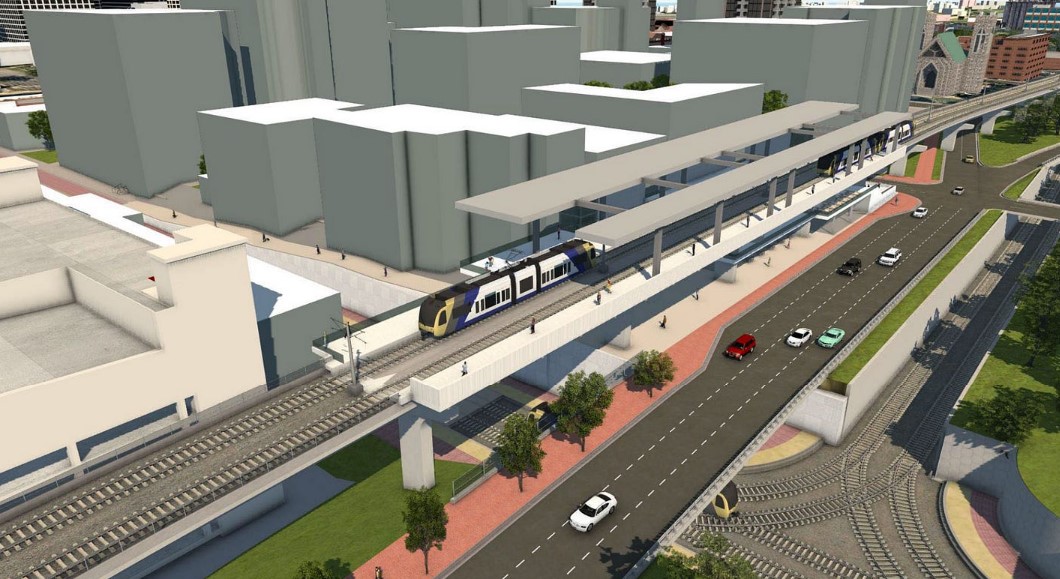 When cities apply for federal funding for new transit projects, ridership is perhaps the most important criteria.

The Federal Transit Administration (FTA) wants to know: How much will a new rail line cost, and how many people will ride it?

The Charlotte Area Transit System knows what the feds want, having built three major rail projects in the last 15 years.

Which is why Monday’s City Council transportation committee meeting was so strange.

WFAE and Transit Time asked CATS’ Senior Project Manager for the Silver Line, Andy Mock, why he didn’t provide ridership data to council members. He did not respond.

The city’s preferred route — which skirts uptown to the north, rather than going directly into the center city — likely has the lowest ridership of the three. The city has said it wants that route because it thinks the Silver Line will spark a new building boom along North Graham Street and Interstate 277.

The problem is that the FTA isn’t particularly concerned about development when deciding whether to dole out billions of dollars for new light rail. And the city’s fixation on new development might come at the cost of winning federal dollars — without which, it’s unlikely the Silver Line would ever be built. 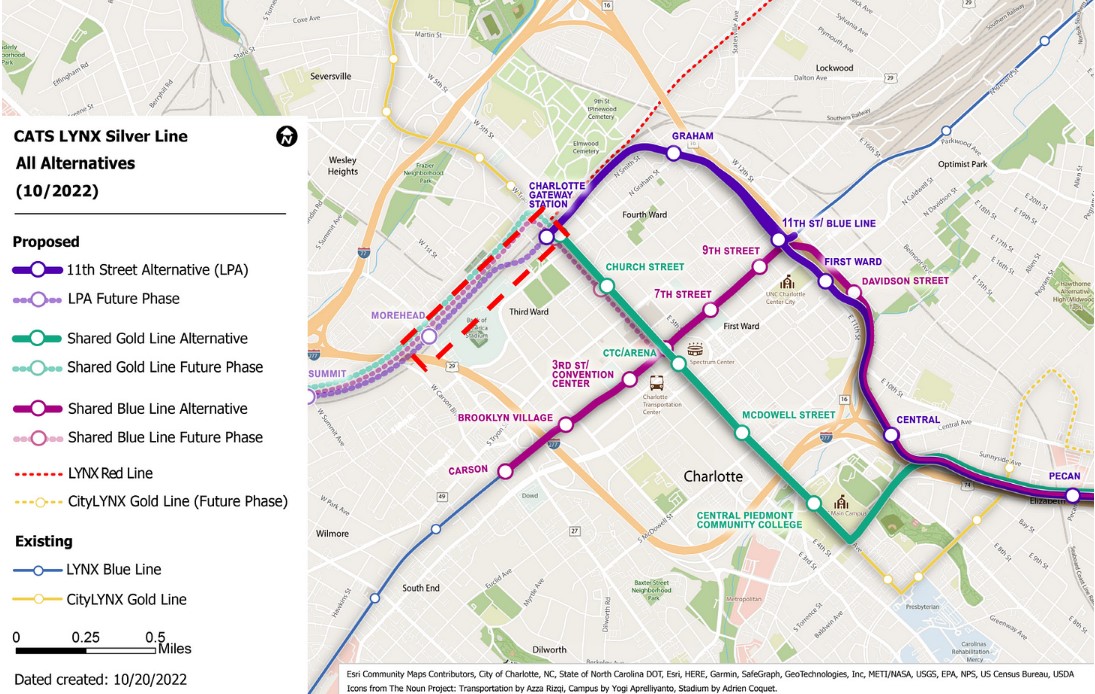 The city and consultants studied several options for the uptown route of the proposed Silver Line, including using the Gold Line streetcar route through the middle of uptown (in green) and sharing a line with the Blue Line (in magenta). The city prefers a route that encircles uptown (purple) rather than going through the middle of it. (Map from City of Charlotte)

In March, the Urban Land Institute warned the city that building the Silver Line around uptown would make it difficult to secure federal funding.

The consultants said that “demand for FTA funding exceeds supply. It is a very competitive process.” They added that bringing the Silver Line through uptown by sharing the Lynx Blue Line tracks would “increase ridership, reduce cost, and improve the FTA rating.” They recommended, explicitly and in bold lettering, that CATS “compare ridership, costs and FTA rating” when evaluating uptown routes. CATS’ preferred route around uptown is the most expensive of the routes studied, and there was no discussion Monday of ridership or FTA rating.

In an interview this week, former CATS chief executive Ron Tober said having strong ridership is critical. He was surprised CATS would make a presentation without detailed ridership estimates.

Without strong ridership, he said, the Silver Line may be “dead on arrival.”

Shannon Binns of Sustain Charlotte, a nonprofit that advocates for sustainability and public transit, e-mailed CATS to express his disappointment with the city’s apparent focus on the potential for new skyscrapers over new riders.

“With ridership not being part of the discussion, the potential to generate new development and property tax revenue and least amount of disruption to businesses emerged as the most important goals of the project,” Binns wrote. “As you know, we believe that as a transit project, development potential is important but ridership and the experience of riders should be the priority.” 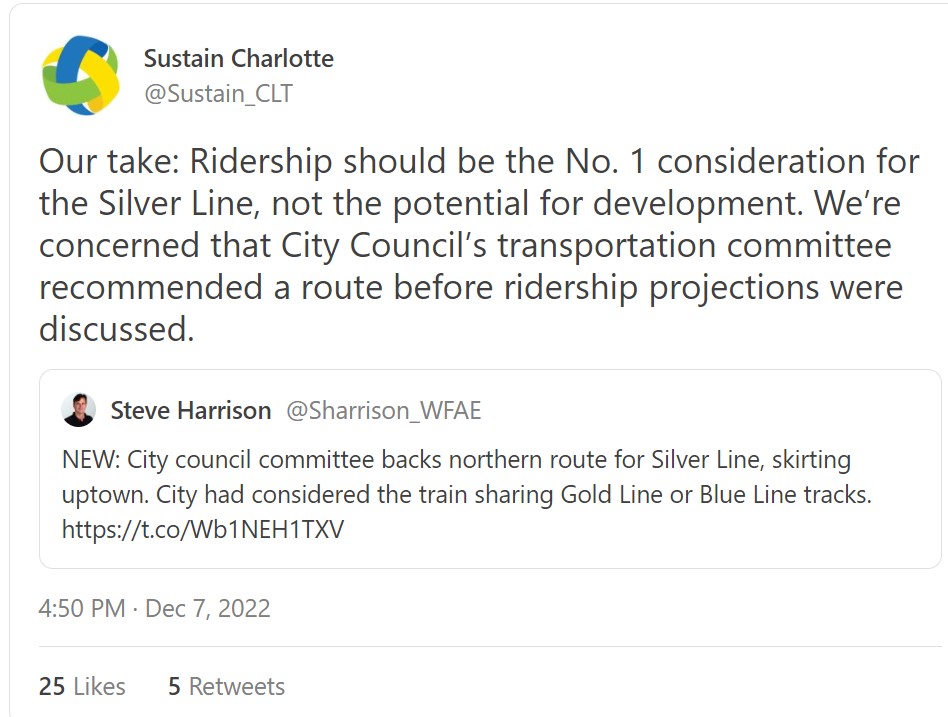 Here are some basics on the debate over the Silver Line:

The entire 26-mile line would run from Matthews to I-485 west of the airport. The biggest debate has been around how the train should pass through uptown.

There are three options. All have upsides and downsides:

◼️ Option 1: The city’s preferred option has been a route that runs along the northern edge of uptown, by I-277. As we said before, this has the potential to generate new development. But it also doesn’t bring riders close to the heart of uptown, where the densest concentration of jobs is located.

For passengers going from Matthews to uptown, they would have two choices: Get off at the planned 11th Street Station and walk 12 minutes to Trade and Tryon. Or get off at 11th Street, walk two blocks to a Blue Line station and then wait for a second train.

The city said in its presentation this route costs roughly $500 million to $600 million more. They also said it reaches fewer jobs than the other alignments — though it does pass by where more people live.

◼️ Option 2: Share the Lynx Blue Line tracks. This alignment would have the Silver Line take a sharp turn to the left, and share the existing light-rail tracks through uptown.

CATS has previously said this would draw more riders than the original Silver Line alignment. It’s also cheaper. The ULI said this alignment could have a better chance at winning federal money.

But CATS said it would have to break the Silver Line in two segments, because it couldn’t run the train through heavily developed South End. The prospect of a two-segment Silver Line, instead of a single, continuous route, may doom that possibility.

◼️ Option 3: Use the existing Gold Line streetcar tracks on Trade Street. This route would allow for a continuous Silver Line. It would bring passengers to the heart of uptown and run through the planned Gateway station. It would also save money.

CATS, however, said it’s worried about reliability, since the streetcar today is often delayed by people parking on the train tracks. Charlotte would need to fix the parking problem, but other cities — including Denver — run light-rail trains for brief stretches in mixed traffic.

In Monday’s meeting, CATS told City Council members it would have to completely rebuild Trade Street. That’s a proposition that made them uneasy, especially after several businesses struggled during the Gold Line’s construction.

But how much work would need to be done? The tracks have already been laid. The overhead catenary is also in place.

The city also said it might have to close Trade Street to vehicles to make sure the Silver Line could maintain a schedule. But as cities worldwide are closing high-traffic streets to cars, would a vehicle-free Trade Street be the end of the world? 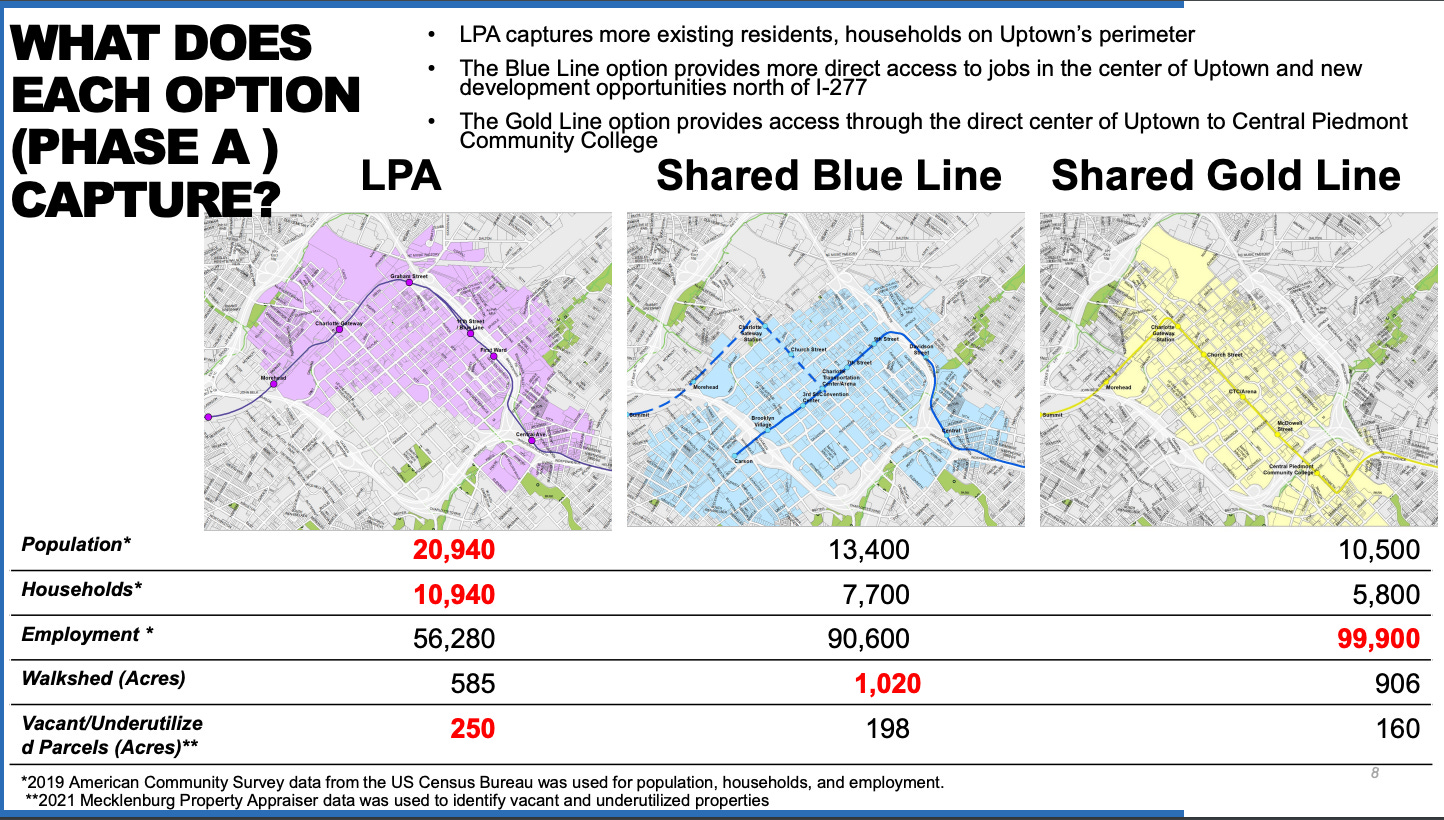 The favored route along I-277 and into Fourth Ward, known as the “LPA” above (“locally preferred alternative”), would pass by more households and vacant and underused parcels, according to the city’s analysis. But alternative routes are closer to more locations where people work. (City of Charlotte)

Even without ridership projections, council members voted 4-1 to endorse the northern route for the train, around rather than through uptown, just as city staff recommended.

I asked the chair of the transportation committee, Ed Driggs, whether he was concerned that CATS never gave him and his colleagues ridership data.

Driggs said he didn’t realize that wasn’t part of the presentation.

No other council member seemed to notice, either.

Steve Harrison is a reporter with WFAE, Charlotte’s NPR news source. Reach him at sharrison@wfae.com.