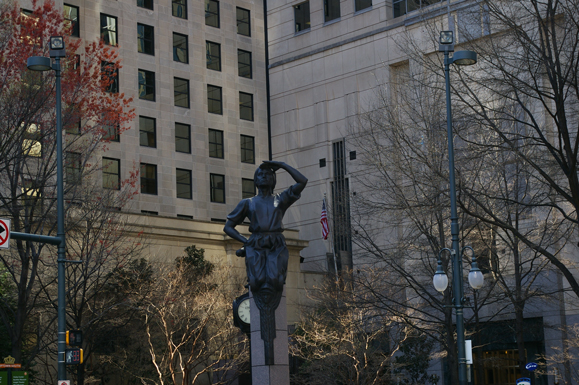 Smart cities around the world use two secret weapons to form leadership and stay ahead of the pack in planning and economic development. One mechanism is internal, an informal, diverse but cohesive planning elite. Another is external, an outward-looking and systematic search for new knowledge, often by visiting other cities. I use “planning” in a broad sense, meaning not just land use, buildings and streets, but strategic vision and direction of growth, economically and physically. Charlotte can accelerate its path forward by combining currently disparate efforts in leadership and learning.

A seminal moment for Charlotte came decades ago, when key business figures, observing similar groups in other cities, decided to organize a high-level planning group back home. The group – which called itself The Group – included Hugh McColl Jr. (from what’s now Bank of America), Ed Crutchfield (from what was then First Union bank, today Wells Fargo), Rolfe Neill (then the Charlotte Observer publisher) and Bill Lee (from what’s now Duke Energy). They sat at the commanding heights of their respective domains in banking, the news media and the power industry. They met regularly for years, expanding their network and effectively forging a new image of the city. And they steered the city toward a wholesale transformation, mostly complete today, at least in terms of the downtown’s physical form.

But with the passing of the power elites and the banking crisis of 2008-2011, Charlotte is in a collective quandary. The future of the city’s leadership and means of livelihood are in question. Meanwhile, the strands of Charlotte’s growth are tangling into a growing knot of problems.  Besides leadership itself, those problems include a persistent racial divide, school inequities, growing disparities in neighborhoods and new challenges relating to immigration of Latino and other ethnic minorities.  This is not to imply the city is in relapse. On the contrary, latent social capital is emerging  to solve the city’s problems.  But evidence from other cities suggests that Charlotte could organize and coordinate these energies to reinstate a steersman, guide the city’s direction and find innovative solutions to its problems.

Cities on the prowl: learning from others
Charlotte is not alone in questions of leadership and direction. Cities around the globe are developing the tools just like those that helped Charlotte nearly 50 years ago. Under the new imperatives of a global economy, many hundreds of cities are engaged in a round-the-world search for answers. Some of their most trusted sources are other cities.

More than a thousand cities on the planet with populations of a quarter million or more are engaged in a growing market of exchange in ideas. Those ideas cover dozens of issues, from land taxes to transit to street lights to economic development.  I documented the breadth of this exchange in Beyond Smart Cities. A vibrant market of ideas has blossomed as cities take part in visits that number in the thousands each year.

Charlotte can learn much from other cities, but the step it needs to take first is building engagement and trust. These objectives are not currently part of the external learning being undertaken in Charlotte. The Charlotte Chamber plays a dominant role in organizing study missions, and though those missions are popular and successful, the targets and topics for the most part have focused on rebuilding and maintaining commercial competitiveness.

One recent visit, in 2009, was to Charlotte itself. The chamber structured a “self-visit” and sparked something of an awakening. Participants began to catch sight of the interaction between finding new ideas elsewhere and processing them internally. This double function was something the original Tryon Street planning clique was able to achieve. Like the Roman god Janus, they looked inward and outward. Charlotte today needs to rebuild some version of that circumspect old guard.

Learning and leadership
Charlotte’s many civic players, with the Foundation for the Carolinas playing a key role, have picked up this mantle of service.  Among other aims, the foundation intentionally works with partners to pair individuals and organizations in a way that forges ties between institutions. Identities and ideas are deliberately mixed so as to achieve a blending.  Yet while this construction of social capital seems to be working, it does not address the issue of collective learning by the emerging leadership.

One way to measure cohesiveness is through clouds of trust. The graphic below represents Charlotte’s web-work of ties among key actors whom I interviewed for the book. Similar clouds were constructed for other cities. Interviewees were asked to identify people they trusted implicitly. Red dots are informants, blue squares represent trusted others. The figures graphically illustrate the cross-overs between and among public, private and civic participants who have gained the trust of their peers. 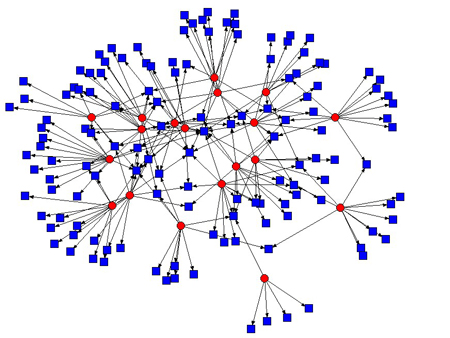 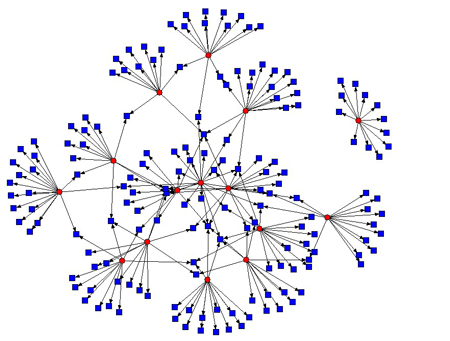 The cloud in Charlotte contrasts sharply with other cities, like Portland, Turin and Barcelona. Some city networks are less dense, with pronounced sub-clusters, reflecting a more heterogeneous composition. (An example is the network identified here as City Y).[1]

The strength in Charlotte’s somewhat homogeneous composition is the speed with which ideas circulate and the coherence of Charlotte’s response to opportunities like prospective new investors or challenges like natural disasters. Clouds that are less dense slow the spread of information and consensus. On the other hand, because they are more heterogeneous, “slow” clouds have a different advantage: They might just possess the solution to a problem at hand. Charlotte’s coherence, though speedy, might not be able to count on out-of-the-box solutions.

Conclusions
Charlotte, like many cities, is pushing to build a new layer of leaders as the community searches for solutions to social-economic disparities and problems of immigration. Beyond Smart Cities shows that successful places find a way to address both issues together. They not only go hand-in-hand, they build on each other. Collective learning helps forge a cohesive leadership; tight leadership converts learning into innovation.

A next step for Charlotte might be to engage in a focused, collective learning exercise. Form a broad-based leadership group – composed of public, private, and civic leaders – and program a series of outbound missions in search for solutions to a few choice problems. In the learning process, Charlotte can progress in two ways: consolidating a new planning elite and moving forward on the frontier of knowledge.

[1] The reader should be aware that the graphics for the two cities may not be strictly comparable, since they may reflect differences in the composition of interviewees as much as the nature of the two cities.

Tim Campbell is chairman for the Urban Age Institute. He can be reached at TimCampbell@UrbanAge.org or 301-656-205.