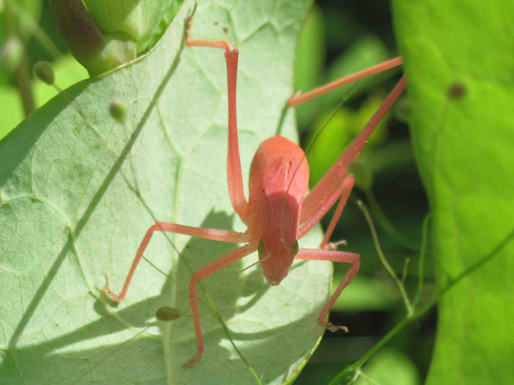 Katydids, (also known as bush-crickets in Britain), are insects in the family Tettigoniidae. They are sometimes referred to as long-horned grasshoppers, but are actually more closely related to crickets. Katydids differ from grasshoppers in that they have very long antennae, while grasshoppers have short and thick antennae. Of the more than 6,400 species of katydid, 225 species occur in North America. Most katydids live in the tropics, where they can grow as long as almost 6 inches. In this part of the world, they are typically 1.5 to 2.5 inches long.

You are probably familiar with their loud trilling or chirping calls in late summer – a rhythmic and echoing “katy-did, katy-did, katy-didn’t.” An old wives’ tale says they are constantly arguing over whether Katy told a lie or not, and that their calls foretell the coming frost and in a way their own epitaph. They are louder than many other insects, and their calls can travel up to a quarter of a mile. They make sounds by rubbing a file-like structure on one of their front wings against the scraper of the other front wing (a process known as stridulation). Katydids hear through organs on their front legs called “tympana.”

These calls are typically males, hoping to attract a female. Female katydids also make noises, however, especially if handled. In the fall, they lay eggs on leaves or on the ground to hatch next spring. For the most part they are nocturnal, unlike the similar sounding cicada, which calls most often in daytime. Katydids are also mainly arboreal, which means they spend a lot of time in the tops of trees. Many species can fly, but even those often crawl or jump instead.

Katydids are usually green or brown and are considered to well camouflaged, mimicking the leaves on which they feed. One common colloquial name for them is leaf insect. It’s somewhat ironic that a species so well suited to blend in would have a color variation to seemingly make it stand out – but I discovered one last week that was not green, but bright pink.

Pink katydids are a color morph of the green katydid and were first discovered in 1887. They are relatively uncommon. Only one of about 500 has this pink pigmentation, also known as erythrism. Erythrism is a unique reddish pigmentation, usually the result of a genetic mutation, similar to the recessive gene found in albinos. The mutation leads to too little of one pigment or too much of another. In some other species, a pink coloration can be a result of diet as well.

At first glance it might seem this coloration puts the pink katydids at a distinct disadvantage to the normal green katydids, which blend in well with their surroundings. However, pink katydids may be specifically adapted to hide in pink or red flowers. The Audubon Insectarium in New Orleans is the only place to successfully breed pink katydids, from a pair brought there in 2008.

The pink katydid that I saw is not considered a “true katydid.” True katydids make up the subfamily Pseudophyllinae, and have oval shaped wings with prominent veins. Those in the genus Pterophylla are the true katydids of eastern North America. They feed predominantly on the leaves of deciduous trees, especially oak.

Like most insects, there’s still much to learn about katydids. Conservation biologists studying katydids in the tropics frequently find species new to science. They can be used as an indicator of disturbance, as many have a small range and are sensitive to habitat fragmentation.

In North Carolina, a lot of katydid species are fairly common, but 17 species of grasshopper and katydid are listed as “state rare.” Habitat loss and pesticide use are two of the main stressors. Many katydids eat and help control populations of other insects and serve as food for insectivores. So although they may seem small and sometimes almost invisible, except for their call, katydids play an important role in the ecosystem.