What can flocking blackbirds in the winter teach us? 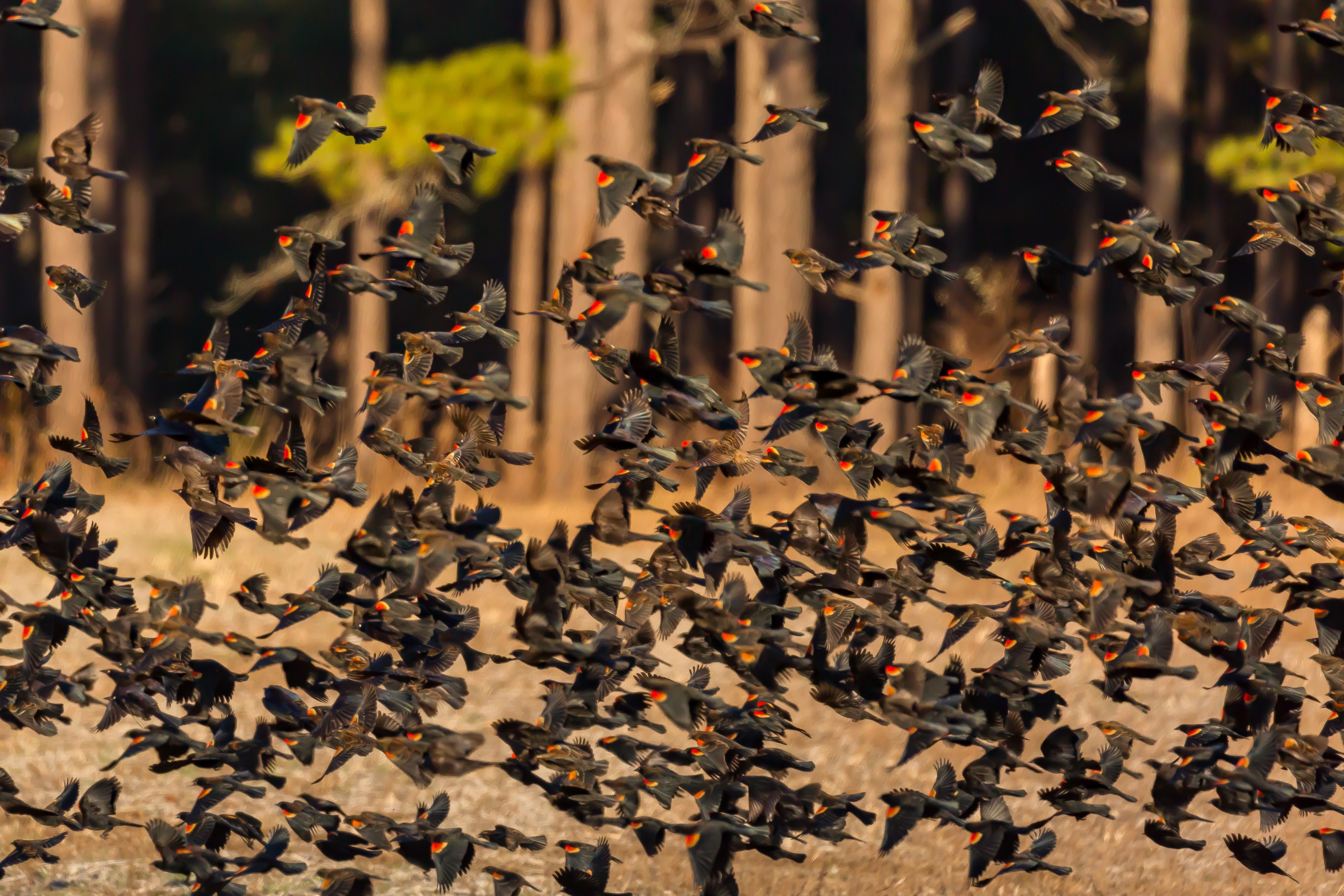 Nothing speaks of the winter sky quite like a flock of blackbirds flying in unison above a sprawling pasture, field or marsh.

They spiral and bank and funnel, breathing life into a void of leaden gray. It’s a spectacle you won’t observe in any other season.

In the Piedmont, these flocks are often composed of an assortment of common species, not all of which are native or even considered true blackbirds: starlings, robins, brown-headed cowbirds, common grackles and red-winged blackbirds. Sometimes the rusty blackbird, an erratic winter visitor in our region, joins them. In other times of the year – when these very same birds are establishing territory, breeding and raising their young – they tend to be more solitary and competitive, and nest in pairs or loose groups. When winter comes along, they become more cooperative and sociable.

But why? Ornithologists believe several factors are at play. Flocking could be in part a response to food availability and procurement. Blackbirds excel at communication. Their ability to share information might be the avian version of crowdsourcing. Maybe on balance it’s beneficial to have access to multiple sources of food, even if it means sharing that bounty with others. This might be especially true in winter, when availability can be limited and quickly exhausted. The cold might also entice these birds to huddle together for warmth.

The authors of Birds of the Carolinas suggest the influence of a human-altered landscape. Converting forests to agriculture has likely caused the population of certain species to explode. The brown-headed cowbird, for example, arrived in North Carolina only in the 1930s, expanding its range from the open plains of the Midwest. Large fields lend themselves to feeding the many instead of the few. On the other hand, perhaps the loss of habitat due to development has forced these birds into communal roosts.

Flocking is also a way to avoid predation. In a seminal article entitled “The Geometry of the Selfish Herd” ecologist W. D. Hamilton argued that the “domain of danger” decreases for each individual as the numbers in a flock or colony increase. As with a school of fish, there’s safety in numbers. A raptor such as a Cooper’s hawk might easily target a lone individual, but it can be confused or overwhelmed when faced with choosing one from a group of hundreds or thousands.
It’s amazing – hypnotic, even – to see an enormous collection of individuals, of different species no less, flying in perfect synchronicity. This natural wonder is known as a murmuration, one that has only recently begun to be fully understood and described.

In a 2009 Audubon article, Peter Friederici notes that even in the early 20th century, scientists trying to explain the phenomenon “groped for such mysterious and even mystical concepts as ‘natural telepathy’ or a ‘group soul.’”  In the 1970s, Wayne Potts, now a professor at the University of Utah, studied dunlins on the Puget Sound, making movies of their flight then dissecting them frame by frame. His “chorus line” hypothesis suggested that birds observe their nearby neighbors for subtle cues of movement, like fans sending a wave around a football stadium.

Computer models of starlings in Rome have revealed even more specificity. The birds seem to focus on the movements of the seven individuals closest to them.

However they pull off such a feat, these winter flocks remind me there are times when it makes sense for us to retreat and focus on our immediate family and times when it behooves us to fly in unison with those who aren’t even kin.