What made our city so divided? This book traces the roots

The new release of a classic book about how Charlotte became so divided sheds light on the city’s enduring inequalities, and why those disparities are far from accidental.

Whether you have more time on your hands without a daily commute or you’re looking for something to read that’s not about the novel coronavirus, UNC Press’s spring publication of the second edition of Tom Hanchett’s Sorting Out the New South City: Race, Class and Urban Development in Charlotte, 1875-1975 couldn’t have come at a better time. Given the disproportionate impact of COVID-19 on the African-American community and households in poverty, its release also highlights the ways race and class have contributed to some of Charlotte’s most challenging issues of recent years, including educational disparities, limited economic opportunity, and gentrification.

The UNC Charlotte Urban Institute’s mission is to help people better understand the Charlotte region and the challenges faced by its communities. While we accomplish this primarily through research and analysis using recent data, historical context for contemporary issues has always been important. When I first came to the institute in 2003, five years had passed since the initial publication of Hanchett’s book, and it was already required reading for anyone hoping to make sense of Charlotte as a “New South City.” It was certainly at the top of my list when newcomers or national journalists would call me seeking to understand the inherent paradoxes of places like Charlotte and Atlanta, cities that had enthusiastically embraced and promoted the economic progressivism associated with the term “New South” without fully abandoning or coming to terms with the structural racism they had inherited from the Jim Crow era.

[Read all of our coronavirus-related articles online]

In 1998, many readers were surprised by Hanchett’s description of a post-Civil War Charlotte that wasn’t as segregated by race and class as it is today. Even newcomers to Charlotte rarely questioned the pattern of racial and socio-economic segregation that would come to be known as the city’s “crescent and wedge.” That term was coined to describe the visual image that even today can be seen in nearly every map depicting Charlotte’s demographic, economic and social profiles - a wedge of affluence in southeast Charlotte, primarily white, surrounded by an arc of low-to-moderate income neighborhoods where most of the city’s black, Hispanic, working class white and immigrant residents live.

But others saw in Hanchett’s book an historical accounting that was long overdue – one that was not only familiar, but for many still living in 1998 a description of their lived experience.  Nearly 20 years before Richard Rothstein’s acclaimed 2017 book The Color of Law: A Forgotten History of How Our Government Segregated America, Hanchett described in Sorting Out the New South City how federal, state and local policies had led to the redlining and deed restrictions that kept African Americans out of certain Charlotte neighborhoods for much of the 20th century.  Many of those marginalized residents would later find themselves displaced, by the forces of urban renewal and gentrification, from the only places in Charlotte they had previously been allowed to live, such as the Brooklyn neighborhood in uptown’s Second Ward.

Hanchett’s book changed the narrative about Charlotte’s past. And in addition to bringing an uncomfortable history out in the open, it enhanced people’s understanding of how seemingly unrelated policy decisions – from land use zoning, to school assignment plans, and the regulation of private lending practices – contributed to the perpetuation of racial inequities and class divides. Today we have a shared vocabulary to describe what Hanchett so honestly brought to our attention in 1998 – structural racism, systemic inequality and white privilege – but those terms didn’t have the currency then that they do now. 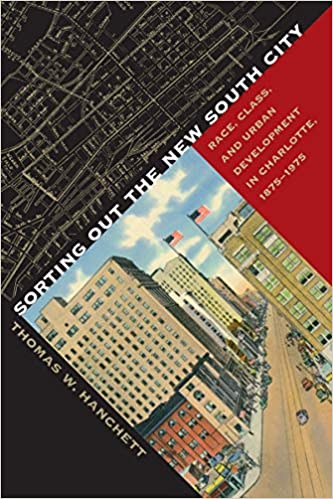 Those terms are now part of our collective dialogue about the city’s present. Hanchett’s preface to the second edition succeeds in drawing a direct connection between the policy decisions of the previous century he chronicled in Sorting Out the New South City, and subsequent events that have shaken modern Charlotte’s confidence in its ability to sustain a vision of equitably shared economic progress.

Barely a year after the book’s initial publication, a federal court ruling ended Charlotte-Mecklenburg Schools’ nationally-recognized system of busing to address historic inequities in education, leading to contentious debates about how to serve the needs of all students. Charlotte’s rapid growth in the following decades included a dramatic influx of immigrants, increasing Charlotte’s foreign-born residents from 1% of the population in 1990 to over 15% by the late 2010s, stirring unease for some as Mecklenburg became a majority-minority county in 2013.  And anger over rising housing costs, gentrification, and limited economic opportunity within the African American community fueled tensions that led to riots and protests in 2016 following the police shooting of Keith Lamont Scott.

But while many in Charlotte have met these challenges with hesitancy, Hanchett isn’t one of them. He instead expresses an optimistic view of the city’s resiliency and provides numerous examples of Charlotteans embracing change and working to right old wrongs.  And he ends his preface to the second edition with these words:

None of these stories is finished today. People make history. People in the past created  the world that we see around us today. The choices we make today have power to help reshape that history in the direction we choose.

I’ve heard others say that this period of sheltering at home is an opportunity for self-reflection, but for those of us who love Charlotte, it can also be a time for reflecting on some of the unfulfilled promises of this shiny New South City. Whether you’re reading it for the first time, or revisiting it after twenty years, you’ll find the second edition of Hanchett’s book a worthy addition to your quarantine reading.