What makes cemeteries truly scary: A case for green burial 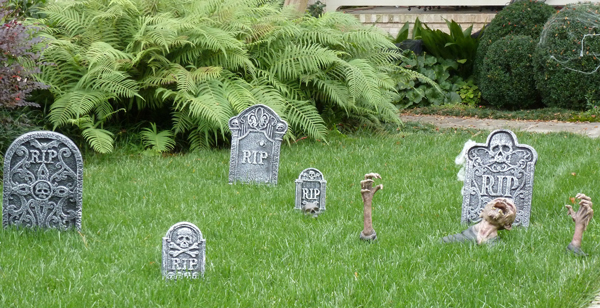 Cemeteries are popping up in yards across our region. Ghosts and skeletons dangle from nearby trees. Zombies claw their way back to the surface of the earth, refusing to rest in peace. My sister and her kids place their graveyard, Eerie Acres, in a low spot along the driveway where fog often settles in fall. It’s spooky! Real cemeteries are even scarier – and not because of the haints that might lurk there. Many of our common burial practices can be harmful, even deadly.

In the United States, we use more than 800,000 gallons of embalming fluid annually. Formaldehyde, a major component of this fluid, is listed as a probable carcinogen by the Environmental Protection Agency. A recent study by the National Cancer Institute found morticians have a significantly higher incidence of myeloid leukemia. Through our use of caskets and vaults, cemeteries inter enough steel each year to build the Golden Gate Bridge and enough concrete to pave a two-lane highway from New York to Detroit. Caskets are often finished with exotic, and sometimes endangered, hardwoods such as mahogany, as well as precious metals like copper and bronze.

Cemeteries themselves take up open space, and their grounds often provide little value as wildlife habitat. Their ongoing maintenance requires the use of fertilizers, herbicides and fossil fuels. Cremation also has its drawbacks, consuming energy and creating air pollution. In addition to greenhouse gases, the emissions can include mercury from dental fillings. These impacts on the environment and human health have inspired a growing interest in “green burial” practices. 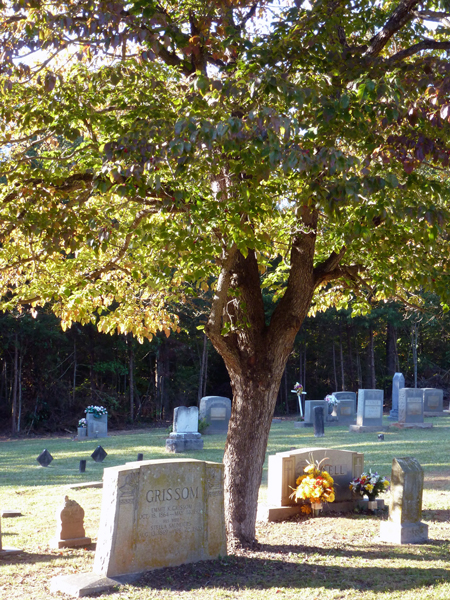 The information above comes from the Green Burial Council (www.greenburialcouncil.org), a nonprofit advocacy group that also sets standards and guidelines for cemeteries and funeral home operators. Choosing a green burial doesn’t mean being unceremoniously dumped into a hole. You can still have a traditional viewing, funeral and burial – you simply have to make thoughtful, informed decisions at every step.

Embalming wasn’t widely practiced until the Civil War, when people wanted bodies of their loved ones shipped home for burial. It has become standard practice if a viewing is part of the service, but there are alternatives. Nontoxic oils can be used in place of formaldehyde or the body can be preserved with refrigeration and dry ice.

Some people choose to be buried in a shroud of cotton or linen, but caskets made of renewable materials such as bamboo, woven seagrass or softwoods like pine are perfectly acceptable for green burials. Vaults, which came into use to thwart grave robbers, are not allowed in green cemeteries. Instead, the ground is either mounded up initially or soil is added as the gravesite settles over time.

Green cemeteries have a more natural look. Instead of vertical headstones, there are either inconspicuous flat markers at each gravesite or a large central marker.  “Conservation burial” goes a step further. The Green Burial Council coined this term at the Land Trust Alliance National Rally in 2005. The goal is to protect, and in some cases even restore, land with high conservation value. In addition to adhering to the protocols for “natural burials,” the property is placed under a conservation easement with a local land trust so the site can be protected in perpetuity.

This concept might seem radical, but it harkens back to the way things were done in the past. Not so long ago, bodies were prepared by members of the family and community, then laid out in the parlor. My mom recalls going to this sort of wake at a home in Ophir in the 1960s. Family cemeteries were also common. Establishing one these days can be as simple as setting aside a minimum number of acres and filing a map with your local planning department. Even though green burial has been embraced as an option by mainstream groups like the AARP and the Lutheran Church, it has been slow to catch on in the South. Pine Forest Memorial Gardens in Wake Forest (www.pineforestmemorial.com) is the only GBC-approved Natural Burial Ground in our state. Their decision to go green was inspired by one man’s quest to secure these services before he died of cancer at 48.  Another interesting example is Honey Creek Woodlands (www.honeycreekwoodlands.com) in Conyers, Ga., which was established by Trappist monks to help preserve the 2200 acres they own as part of the Monastery of the Holy Spirit.

According to Sherrill Bumgarner of Pugh Funeral Home in Troy, advocates for green burial attended the National Funeral Directors convention in Charlotte recently. An avid outdoorsman, Bumgarner can understand the appeal of cemeteries with native trees, shrubs, wildflowers and grasses. He says a range of green burial services are available by request at Pugh, from nontoxic embalming fluid to biodegradable caskets. He notes that many of these practices are in keeping with Jewish traditions based on Genesis 3:19 which says “for dust thou art, and unto dust shalt thou return.”

In a rural area like the Uwharries, many people choose to be buried in the graveyard at their church, but that’s not an option in urban areas of the Piedmont where land is at a premium. Natural or conservation burial grounds could fit seamlessly into our landscape. Visiting one this time of year, I can imagine taking comfort in butterflies sipping nectar from bright yellow sunflowers, languid bees dusted with pollen, migratory songbirds pausing to feast on dogwood berries and deer browsing early acorns at the forest edge. Instead of shunning cemeteries as somber, scary places, perhaps we’d come to celebrate them as places teeming with life.

Thanks to Sherrill Bumgarner for taking time to talk with me, to Angela Bernard for alerting me to a podcast on home funerals (http://thirdcoastfestival.org/library/tag/Death), and to Lisa Renstrom for sharing an oddly touching TED Talk that takes green burial to a whole new level (http://www.ted.com/talks/jae_rhim_lee.html).

Views expressed here are the author’s and not necessarily the views of the UNC Charlotte Urban Institute or the University of North Carolina at Charlotte.