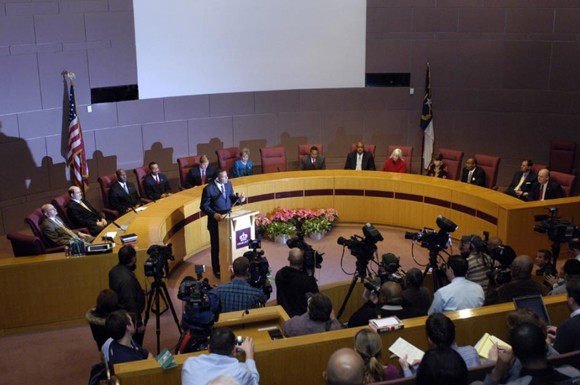 It is commonly expected that consolidating Charlotte and Mecklenburg County will result in less government fragmentation, fewer elected officials and lower the cost of service provision.  It very well may, but citizens should know that nothing is guaranteed when it comes to city-county consolidation. And some of the commonly held beliefs about consolidation may not, in fact, be accurate. One prime example: In many recent city-county consolidations the smaller municipalities in a county weren’t part of the merged body.

If one looks closely at several recent consolidations, one caution to remember is that the “devil is in the charter details.” The charter, like all legislation, is a product of compromise. You might be surprised at what can be included – or excluded – in order to gain enough political support to get consolidation passed.

City-county consolidation is the merging of two political structures defined as a city and county, including their elected bodies, typically the existing city council and mayor with the board of county commissioners. Often called “structural consolidation” or “political consolidation,” this definition does not necessarily imply that all services from each former municipality have merged into one government within a county. Instead, this type of consolidation may involve leaving a considerable number of services such as police and fire independent. This was the case with Unigov, Indianapolis-Marion County, Ind.1 Or they may establish separate service districts that can have different tax rates, mirroring the old boundaries of the city and county, as was the case in Nashville-Davidson County, Tenn. Most mergers also exclude special districts, including school districts. So a consolidation may result in the loss of one local government, but it does not usually mean a metropolitan-wide government structure. It does not typically include areas outside the home county, which a truly metropolitan-wide structure would, since most metro areas cover several counties.

Another important characteristic is that in most recent city-county consolidations in urban areas, smaller municipalities and towns remain intact and continue as independent elected bodies. For example, Indianapolis-Marion County, Ind., excluded four cities and one town when they consolidated (Beech Grove, Lawrence, South Port and the town of Speedway). Wyandotte County-Kansas City, Kan., excluded the cities of Bonner Springs, Edwardsville and Lake Quivira. In Louisville-Jefferson County, Ky., 83 incorporated cities were excluded from consolidation.

It’s important to note, also, that a consolidation does not necessarily lead to an overall reduction in the number of elected officials. In more than 50 percent of modern consolidation cases the new, combined city-county elected body contains the same number of elected officials as in the previous city and county, or even more. Smaller municipalities, which are almost always excluded, continue to retain their elected bodies but also have representation in the new unified government. In Wyandotte County-Kansas City, Kan., which consolidated in 1997, one of the mayors of a town that was excluded from the consolidated government was elected to the unified governing body and served in two capacities.

The longstanding argument that consolidation will increase local government efficiency continues. After all, shouldn’t one be cheaper than two?  There has been considerable academic debate about this, and it can best be characterized as the regionalism vs. fragmentation debate. While the regionalists’ perspective advocates consolidation to reduce governmental fragmentation and take advantage of economies of scale, public choice theorists argue that this approach will fail to achieve any efficiency with regard to the use of scarce resources. Indeed, from the public choice perspective, single-unit governments are more likely to behave as monopolists and reduce the quality of services while prices (taxes) rise.

The fact is, the probability of increased government efficiency is often lowered by the compromising “political” nature of consolidation campaigns. In order to neutralize powerful voting blocs, proponents often have to sacrifice some of the easiest ways to economize. Thus, proponents often promise no layoffs of city and county employees and that savings will accumulate over the long run, from attrition. This assumes that vacant positions will not be filled; however, these positions can and often are reallocated to other uses, presumably to make government more effective or to more efficiently allocate resources. But the promise to voters is usually to economize and reduce spending, not to more efficiently allocate the government’s resources.

Opportunities to economize are also undermined when consolidation proponents need to promise to raise salaries in comparable positions to attain equity; the alternative of lowering salaries is not generally up for discussion. For example, proponents typically would not argue that they will lower the salaries of city law enforcement officers (police officers) to the level of county law enforcement officers (typically sheriff’s deputies).

Second, promised economies of scale in service delivery (e.g., water, sanitation, policing) can be dwarfed by the new capital investments to raise rural service levels. While debt financing can obviate the need for large, immediate capital spending, the debt still must be repaid with higher revenues, and for some time. In small jurisdictions, such as in Lynchburg-Moore, Tenn., where debt financing is not as easy as in larger jurisdictions, the spike in spending related to new fire engines, new police cars and uniforms can swamp the expected economies of scale quickly.

Although this was not an issue in consolidations prior to the 1960s, today’s efforts to merge governments can expect to spend more on merging information technology systems than any hypothesized savings that might come from fewer IT staff in the short-run. Savings from merging systems are far from obvious; quite the contrary.

Finally, the presumed savings from blending finance and budgeting administrations is often elusive. These functions in a city and a county do not overlap much. The county’s finance department is largely oriented toward collecting taxes on behalf of the constituent governments and the state, involving property assessments and billings that the cities do not perform. In addition, the expanded social service and other state-mandated functions of county government require attention at the budget office level that is not required in a city budget office.

1It took Unigov more than 30 years to functionally merge police departments. In fact, leaders from Unigov visited Charlotte when Pat McCrory was mayor to receive advice on how to combine law enforcement agencies.