Where everybody is above average 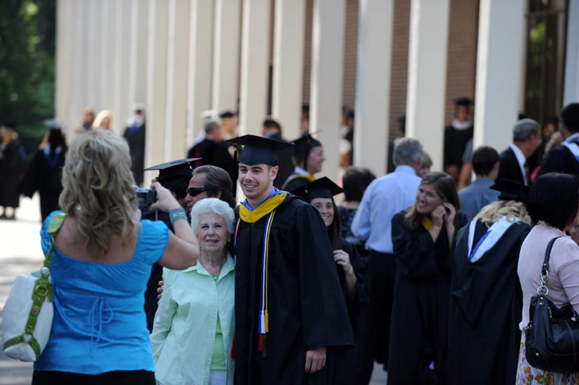 In Garrison Keillor’s mythical hometown of Lake Wobegon, all the children are above average.  In terms of where the college-educated live, there are a few Lake Wobegons, and then there is everywhere else.

This pattern reflects the national situation. Across the country, a relatively small number of counties contain concentrations of college-educated populations.  The map below by the Census Bureau shows the percentage of adult population with college degrees.  The pattern that emerges is of widely scattered centers of highly educated populations surrounded by large areas below the national average (27.5 percent).  The high-education counties are often identifiable as the locations of large cities or universities.   The Census Bureau reports in September1 on the strong link between education and lifetime earnings, making this map either a reason to be hopeful or to be worried, depending on where you are. 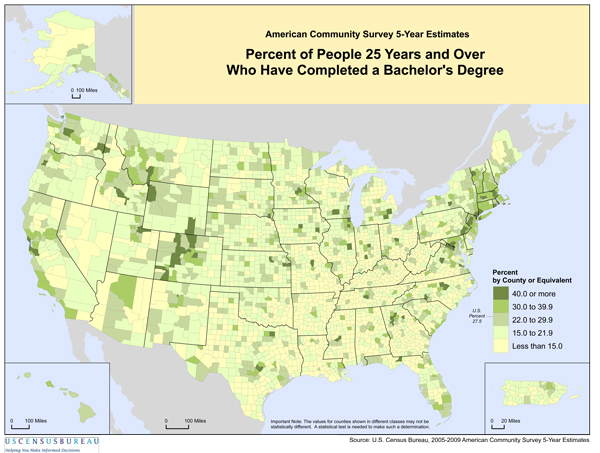 To see this and other Census Bureau maps at full size click here.

The link between education and earnings is well established.  Analysis by the Census Bureau in September 2011 showed that education is five times more important than any other factor in determining lifetime earnings.  The chart below shows the estimated annual earnings by level of education and age group.  The effect is dramatic. 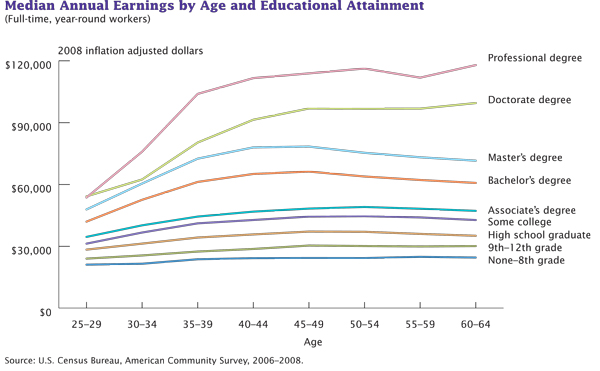 For the full report and detailed methodology click here.

The map of N.C. counties below shows counties grouped above and below the state’s overall average college educational attainment of 25.8 percent.  More than 80 percent of N.C. counties (82) fall below this average.  Anson County, east of Charlotte, has the state's lowest rate at 7.2 percent.  North Carolina has four counties where college graduates make up 40 percent or more of the population: Durham, Mecklenburg, Orange and Wake. The rapid growth of Charlotte and Raleigh over the last two decades has created a new situation in this traditionally rural and small-town state.  The two counties that contain Charlotte and Raleigh (Mecklenburg and Wake) now “move the needle” on state averages in ways that they could not in the past.  If the population of Mecklenburg and Wake counties were omitted from the calculation of college-educated population, the state average would drop from 25.8 percent to 21.7 percent.  The weight of these two large, highly educated counties helps move the state average much closer to the national average (27.5 percent). 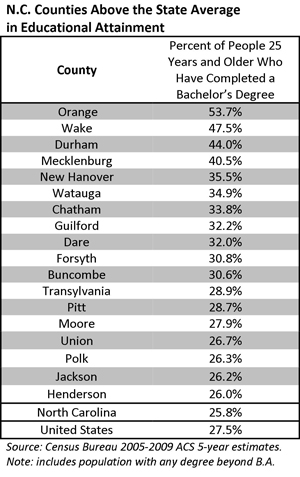 The 18 counties above the state average in college degrees are ranked in the table (right).  Several of these counties, besides Mecklenburg and Wake, are home to larger cities: Durham (City of Durham), Forsyth (Winston-Salem), Guilford (Greensboro) and New Hanover (Wilmington).  Chatham and Union are fast-growing suburban counties.  Other counties at the top ranks of college-educated populations are not home to large cities, but do contain large state universities. Orange (UNC Chapel Hill), Pitt (East Carolina University), Watauga (Appalachian State University) and Jackson (Western Carolina University) are examples.

Bill McCoy, emeritus faculty at UNC Charlotte, noted that, “It seems like a new variable is the retiree relocations to this state, primarily in the mountains and to a somewhat lesser degree in the coastal areas. We have known for a while that the older adults who do move tend to be better off (financially, physically and other ways) than those who do not.”  Buncombe, Henderson, Jackson , Polk, Transylvania and Watauga counties are in mountain areas considered to be attracting retirees.  New Hanover and Dare are coastal counties.  Moore County, home to the golfing centers of Pinehurst and Southern Pines, is also considered a retiree destination.

The link between education and income, combined with the geography of educational attainment across the state (and country), points to challenges ahead for policymakers.  The growth of cities, the growing importance of universities and the choices educated retirees make about where to live are all factors that will shape North Carolina's prosperity in the future.  The realities of national patterns in education also point to the growing importance of the state’s cities as engines of economic growth and income.

To read the full report and learn more about the U.S. Census Bureau’s research on educational attainment.