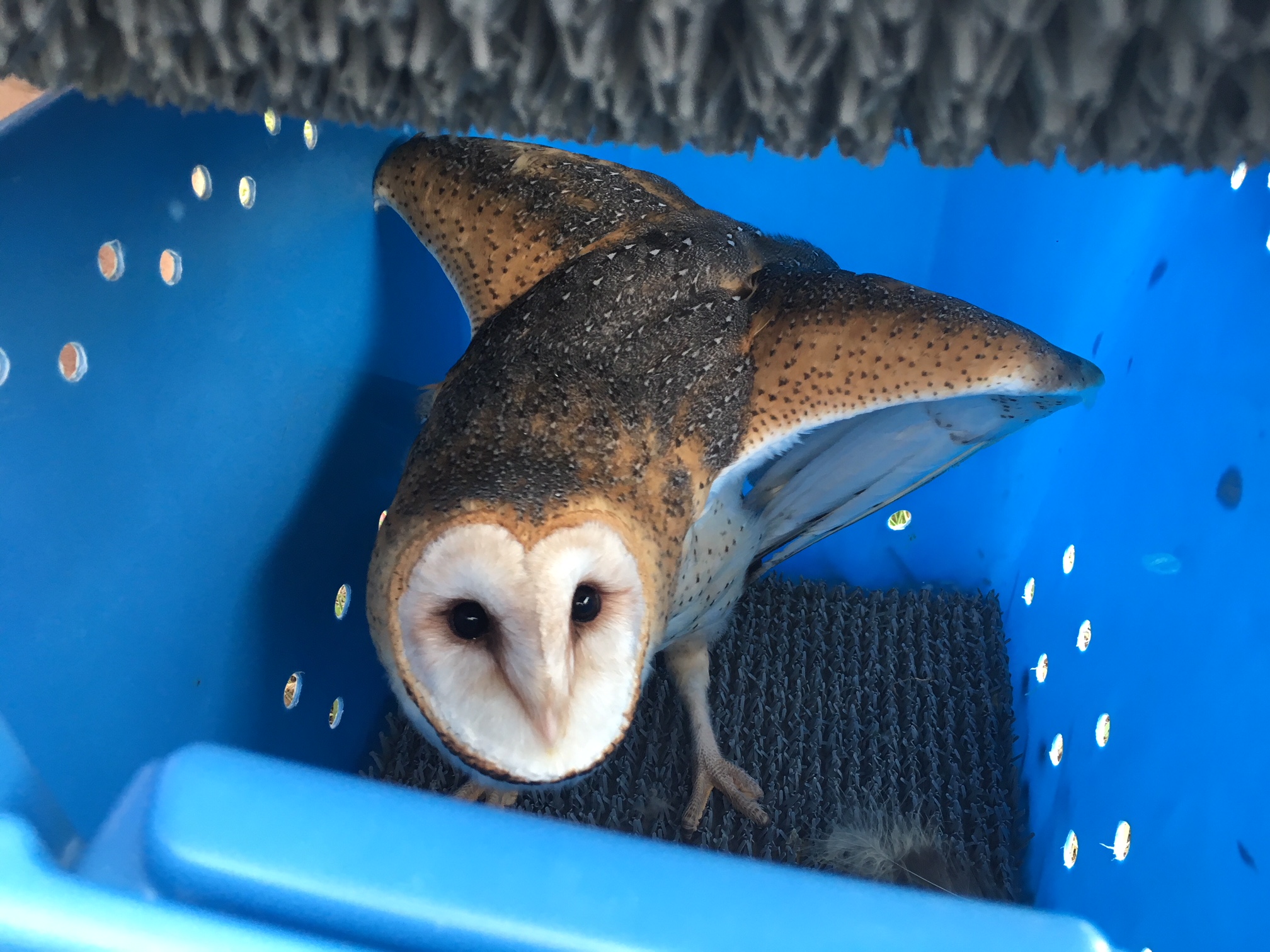 On Father’s Day, my sister and I honored the finest man in the Uwharries and beyond, and also a remarkable barn owl named Harvey. According to the Carolina Raptor Center, the lifespan of a barn owl (Tyto alba) in the wild is generally only two to five years. They can easily live twice as long in captivity thanks to medical care, predator control and a steady food supply. Harvey has lived at the Raptor Center since 2001, when he arrived from Buncombe County with a broken wing. The injury left him unable to fend for himself in the wild, but even as a geriatric bird in captivity, he continues to father owlets.

When a bird can’t be returned to the wild, the Raptor Center is sometimes able to keep it for educational purposes. Harvey lives in a large cage along the display trail, on view to visitors. Over the years, he has shared his quarters with a number of other barn owls, including a succession of mates. While people like to say raptors mate for life, it would be more accurate to describe their practice as serial monogamy. If their partner disappears, they readily accept a new one.

Harvey and Faye were mates for several years but produced few viable chicks. After Faye died in 2017, Harvey turned to Minerva, who had been living with them for nearly five years. They had something in common. Minerva had also suffered a broken wing. She was found orphaned in an old combine a farmer was trying to move. Harvey and Minerva have since produced two successful clutches. Two chicks hatched in early February. Once they passed their “live prey test” in mid-June, they were ready to be released.

Unfortunately, there’s little suitable habitat left in Mecklenburg County. One owl was taken to Rural Hill, the historic farm near Huntersville. Michele Houck, the Raptor Center’s “chief wonder maker,” contacted me to ask if I could suggest an appropriate spot in the Uwharries for the other.

Barn owls once ruled the night skies of the Piedmont. Historically, they were cavity nesters, but they adapted to human structures such as silos and barns. While other owl species inhabit the region’s forests, barn owls favor open land. As the Piedmont’s fields and pastures have converted to subdivisions, shopping malls and pine plantations, the barn owl population has plummeted. I was pleased to tell Michele the Uwharries could still offer an intact landscape, a place with an old farm shed, a standing oak snag and extensive grasslands.

We met at the site at 7 p.m. The weather was terribly hot. The bird arrived in a plastic storage bin with holes punched in the sides. Michele cracked the lid to give us a peak at the owl, believed to be a female based on her size and darker coloring. The owl lifted her wings and bobbed her head to show her displeasure with the intrusion. Her pale monkey-like face was perfectly shaped to funnel sounds toward her ear openings. Her back was speckled, brown and tawny, contrasting dramatically with her white belly and chest. I could see how the glimpse of a barn owl in a dark, abandoned building might inspire stories of ghosts.

We took her to a shady spot under the canopy of a large oak near the shed and waited for the sun to sink a little lower. Michele asked if we’d like to name her, maybe Uwharrie? That felt like a mouthful, so I shortened it to Re, a name that also brought to mind a list of appropriate words. Recover. Restore. Reassure. Release.

At 7:20, Michele removed the lid and tipped the bin toward the shed. Re hesitated only a moment before she pushed off and took to the sky. She soared west toward the setting sun, then circled back to perch on the bare limb of the snag. We cheered, moving closer for a better view. Re pumped air under her wings and sailed toward a grove of maples. Her flight was elegant – light with ease and heavy with intent. Enthralled, we followed her toward the maples. Before we could get there, she took off again, this time toward a dense stand of pines – across a road that suddenly seemed busy and menacing.

My heart sank. What was she thinking? We had offered her the ideal habitat! She wasn’t supposed to go in that direction! She was supposed to hang out in the shed, stay away from the road. At dusk, she was supposed to glide low over the grasslands, pull up at the hedgerows. We waited for her to re-emerge. I held my breath at the sound of every passing car. Biting gnats attacked our legs. Desperate to lure her back, I played a recording of the barn owl’s screeching call. She did not respond.

She’d been fed before she left, I reminded myself. She wasn’t hungry. She didn’t need to hunt. And it was still daylight, I thought, further consoling myself. It wasn’t time for her to fly. She’d just endured a stressful trip in a plastic bin, only to be released into an unfamiliar setting. She needed to hunker down and rest. I convinced myself she’d been drawn to the stand of pines because it evoked the dense forest canopy along the display trail at the Raptor Center. She’d found a safe and familiar place.

Later that evening, as we enjoyed my sister’s homemade ice cream, I looked at my dad and the connection suddenly hit me. That’s what fathers experience. (And mothers as well, of course.) You launch these fledglings into the world, then cringe when they make questionable decisions. You worry you somehow failed them. But you also comfort yourself with stories that show they’re strong and sensible. And mostly, you hope and pray they return to a nurturing place.