Baseball as a redevelopment strategy? Three cities pin their hopes on it

In the wake of manufacturing-based economies that once formed the basis for much of the region’s prosperity, three cities and towns in the Carolinas Urban-Rural Connection study area are hoping the crack of a bat will herald economic revival.

Gastonia and Kannapolis were once textile powerhouses, while High Point remains an important player in the furniture industry. They’re each investing tens of millions of dollars in new, minor league baseball stadiums meant to spur adjacent redevelopment and draw people back to downtowns hollowed out by the departures of major employers and retailers.

Historically, towns like Kannapolis played an important role in the success and growth of the region, making up part of the “connective tissue” that wove the greater area together. They served as manufacturing hubs and distribution points for goods and services. And company-sponsored baseball teams drew big crowds as the mills faced off against one another, playing an integral part in forming local identity.

“Man alive, talk about baseball. When there was a ballgame, the whole town would turn out,” said Ted Reece, a 91-year-old retired mill worker, reminiscing about growing up in Cramerton, near Gastonia, in the 1930s. Mill owner Stuart Cramer made sure his teams were well-stocked with talent. “Cramer never paid anyone to play ball, but if you were a good ballplayer, you got a good job. That was how he worked that.”

Now, the towns’ potential reinvention could serve as both a model and a morale boost for other former manufacturing towns seeking to reshape their futures. It’s a strategy that’s already been successful in Charlotte and Durham, where downtown ballparks have spurred waves of new development and draw hundreds of thousands of visitors. Kannapolis, High Point and Gastonia are hoping for a similar spillover effect.

Kristy Crisp, Gastonia’s economic development director, said the city planned its new stadium around much more than just baseball games. The plan is to attract concerts, other sports like soccer and lacrosse, festivals and community events to draw visitors and residents year-round.

“It wasn’t going to be successful only with baseball,” she said. “We know we’re too close to Charlotte and the Hickory Crawdads to have a minor league-affiliated team. It was about how do you fill this area with people?”

Here’s a look at what each community is building, how much they’re spending and how they’re funding their plans:

The problem: When the Pillowtex plant (formerly Cannon Mills) closed in 2003, more than 4,300 workers lost their jobs in a single day. Kannapolis was left with an enormous, empty textile factory squarely in the middle of its downtown.

What they’re doing: In 2016, Kannapolis spent $8.75 million to buy almost 50 acres where the factory once stood. The town is spending $52 million on a nearly 5,000-capacity ballpark (with 3,200 fixed seats) for the newly-named Minor League Class A Kannapolis Cannon Ballers. The ballpark is set to open in April 2020, and Kannapolis is spending a further $13.4 million for an adjacent parking deck that will serve residential and retail developments. The Cannon Ballers are moving from a stadium several miles away, distant from downtown and only accessible by car.

How they’re paying for it: In addition to the team’s 30-year lease for the ballpark (under which they’ll pay $450,000 for the first three years, with $35,000 rent increases every three years), the town is financing the cost with city-issued bonds.

What’s happening around the stadium: Kannapolis officials say they’ve already garnered private development commitments totaling at least $128 million, including the town’s first brewery, a 286-unit apartment building developed by Lansing Melbourne Group with additional retail, and a 125-room hotel with a lobby in the former Cabarrus Bank Building.  Further negotiations with developers are ongoing, and Kannapolis officials say they expect around $400 million worth of development over the next decade.

The problem: The city’s downtown has struggled following the textile industry’s exit. Efforts such as the Loray Mills redevelopment have attempted to repurpose and reuse old buildings, but Gastonia officials want to spur more private development. The new stadium site was home to a long-closed Sears and a high-crime motel, which the city was able to acquire and demolish.

“This area we’re working in has seen a lot of disinvestment over the years,” said Crisp.

What they’re doing: Gastonia officials broke ground in September on “FUSE,” a redevelopment project centered on a new ballpark. Gastonia officials are negotiating with the Atlantic League to bring a new franchise. The Franklin Sports and Entertainment district will include a hotel, apartments and new retail options. Gastonia has spent or encumbered $6.5 million on studies, land acquisition, demolition and other planning costs. The 5,000-capacity stadium (with 1,500 fixed seats) will cost about $26 million, with an expected opening in the spring of 2021.

How they’re paying for it: Gastonia issued $24 million worth of limited obligation bonds to cover most of the stadium construction costs. Other financing sources include a one-time transfer from Gastonia’s general fund, philanthropic contributions, anticipated increased revenues from hotel and tourism taxes and the sale of stadium naming rights.

What’s happening around the stadium: Lansing Melbourne Group (the same developer working in Kannpolis) is redeveloping the former Trenton Mill adjacent to the stadium site into an 85-unit apartment building. Another pair of developers are planning to turn the former Coca-Cola bottling plant into a brewery and mixed-use building. The city is seeking private partners to lead the redevelopment of other adjacent parcels owned by Gastonia. Ultimately, city officials hope to attract more than $75 million worth of private development. 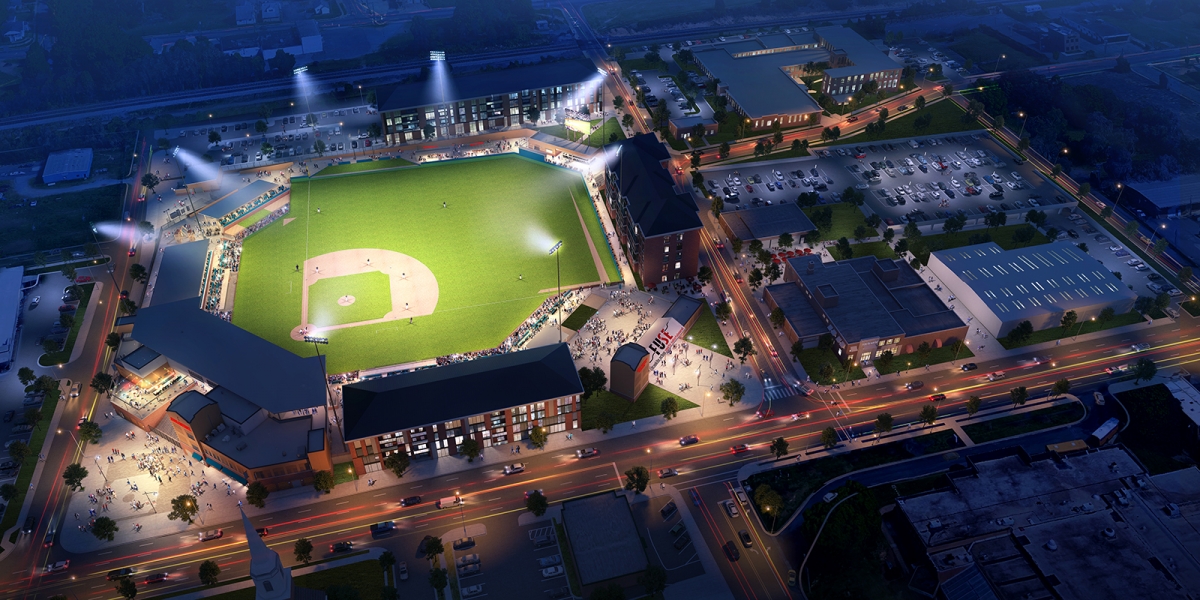 A rendering of the planned FUSE district in Gastonia. City of Gastonia.

The problem: A longtime hub of the furniture industry, High Point’s downtown has long been dominated by huge warehouses and showrooms. As businesses closed or moved, little replaced them: Since 2008, High Point said its downtown tax base lost $250 million worth of value. The city (portions of which are in Randolph and Davidson counties, part of the study area) wants to bring in more retail, residential and other options to diversify the area and add vibrancy.

How they’re paying for it: High Point issued $35 million worth of limited obligation bonds to cover the cost of the stadium. BB&T agreed to pay $7.5 million for naming rights, at $500,000 per year for 15 years, and other repayment sources include increased revenue from property taxes in the redevelopment area, parking fees and the baseball team lease for the facility.

What’s happening around the stadium: Elliott Sidewalk Communities is planning $86 million worth of development on adjacent parcels, High Point said, including a hotel, apartment, retail and office space. Other publicly owned parcels are being offered for redevelopment as well, and Nido Qubein, the president of High Point University, has pledged to raise funds for a new children’s museum, park and event center across from the stadium.