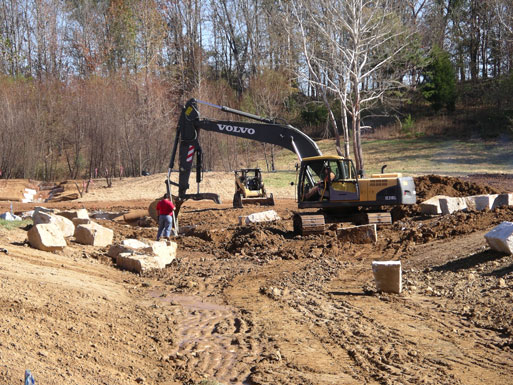 We’ve had some heavy machinery on our land in southern Randolph County the past few months.  Rest assured – this earth-moving equipment has NOT been there to prepare the land for a subdivision, fast-food chain or strip mall.  It’s part of a wetlands restoration project through the state Ecosystem Enhancement Program (EEP).  When streams or wetlands are degraded during road construction, EEP projects aim to offset the damage by protecting or restoring another stream or wetland in the same watershed.

For many years, farmers (and city planners) seemed to see water as the enemy.  They tried to get rid of it as quickly as possible.  They installed ditches and straightened waterways.  As a result, vast amounts of topsoil, fertilizer and animal waste flowed into the rushing water. 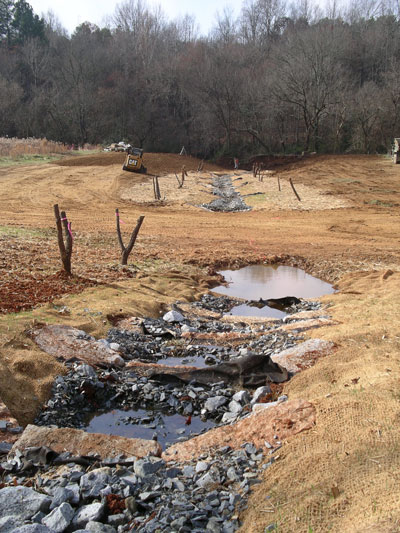 That’s what had happened on our land.  A creek and several small tributaries riddle the tract.  Bottomlands had been ditched, diverting water from its natural path to the river.  Streambanks and ditches had eroded, especially at cattle crossings.  One pond had silted in and another’s dam had blown out.  All this was compromising water quality in the Uwharrie River.

Now, we’re offering the water a little Southern hospitality – inviting it to slow down and stay a spell.  The first phase of our construction plugged the ditch and created a series of pools to let the water drop gently from the breeched pond to the Uwharrie River.  The contractor dug a small meandering channel behind the old dam “to remind the water where it wants to go.”

We’ve had a first-class team on the project, and everything has gone smoothly.  Baker Engineering designed the plan, and Wright Contracting won the bid to implement it.  Our EEP project manager, Watson Ross, has kept us all on the same page – a job which is probably akin to herding cats.  The only thing we’ve had to do was agree to put a conservation easement on the stream buffers.  The contract we signed with the state conveys with the title to the land.  The areas within the easement will never be cultivated or developed.

Several years ago, EEP did a similar project on Phillip Hurley’s land on Love Joy Road.  There, a tributary through a bottomland pasture had been ditched, but it was still prone to flooding.  Cattle had damaged the area and invasive privet had taken over much of the floodplain.  The project fenced out the cattle, created a more natural, meandering course for the tributary, restored areas of wetlands, removed the privet, and replanted native vegetation to stabilize the banks.   This project was a priority because the tributary flows into Barnes Creek, one of only two creeks in the Piedmont designated as Outstanding Resource Water, the state’s highest level of water quality.  EEP has continued to monitor the site to ensure that everything settles into place as planned.  So far, so good.

Most of the major construction on our project has been completed, and the planting phase will begin this month.  Native trees, shrubs, grasses, and sedges will grace the easement areas.  This will hold the banks in place and filter water coming off the fields.  Plus, it will make great habitat for all sorts of critters.

See the full set of photos of this project.