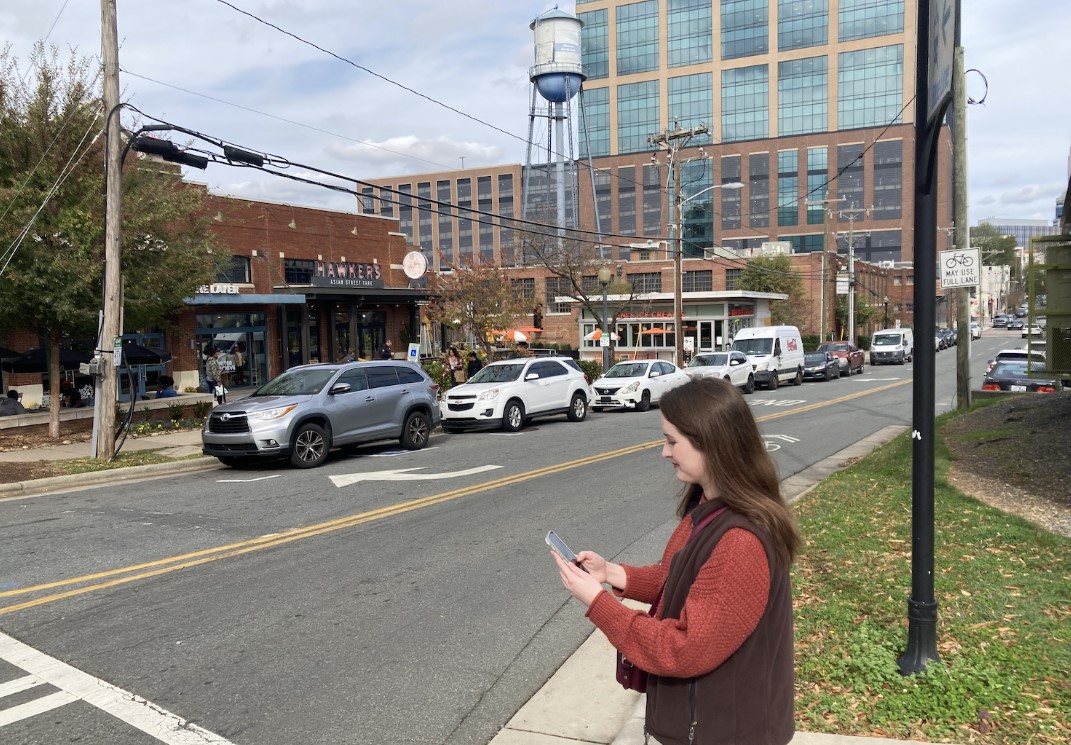 Three voices blared simultaneously through my car’s speakers Monday morning in South End: One was my GPS directing me toward Krispy Kreme. Another was Taylor Swift and her new “Midnights” album. The third was the City of Charlotte’s new TravelSafely app.

The city launched a test project a week ago through the Glance TravelSafely app as part of Charlotte’s “Vision Zero” safety initiative to eliminate traffic deaths and serious injuries. The app gives traffic alerts to drivers, pedestrians and cyclists to help move safely through 30 intersections in South End through November 2023.

If TravelSafely proves it can reduce accidents, then it could be in Charlotte indefinitely. In announcing the app last week, the city said it is “cutting-edge technology” that will “connect those who download the app to a network of traffic intersections, pedestrian beacons, motorists, cyclists and pedestrians.” 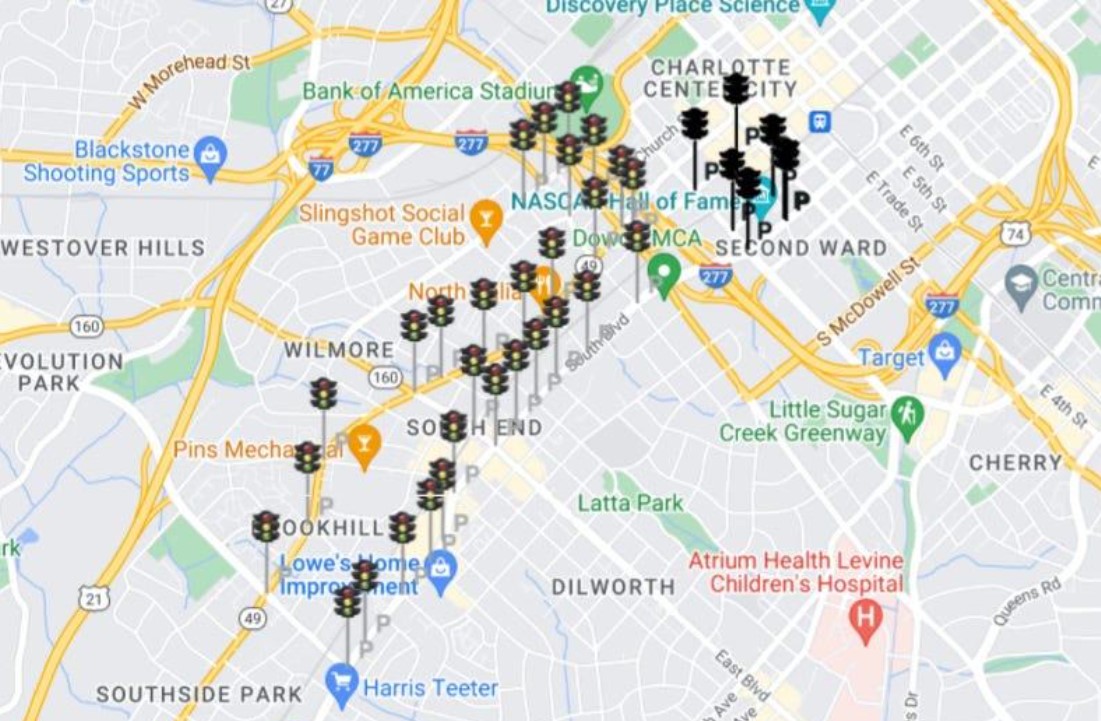 TravelSafely has traffic alert systems in 241 jurisdictions in the U.S. and Canada, and since the app appeared as a beta in 2017, it has more than 10,000 downloads, said Bill Wells, vice president of communications at Applied Information, the tech company that developed the app.

I downloaded the free app on Monday from the Apple App Store (also available in the Google Play Store) to see how it worked and if it actually improves safety.

How it went: Once I got to South End in my Toyota Solara, I opened the TravelSafely app and left it going in the background while I used my Waze navigation app set to Bank of America Stadium (which is where the app’s northern boundary ends on South Mint Street). The green beacon icon in the right-hand corner of the screen let me know that I was connected to the network.

Whenever I was stopped at a traffic light, TravelSafely announced “get ready for green” in a Siri-like female voice within three seconds of the light turning. At the next red light on South Tryon Street, I changed my phone’s display screen to TravelSafely and saw a countdown to the green light. 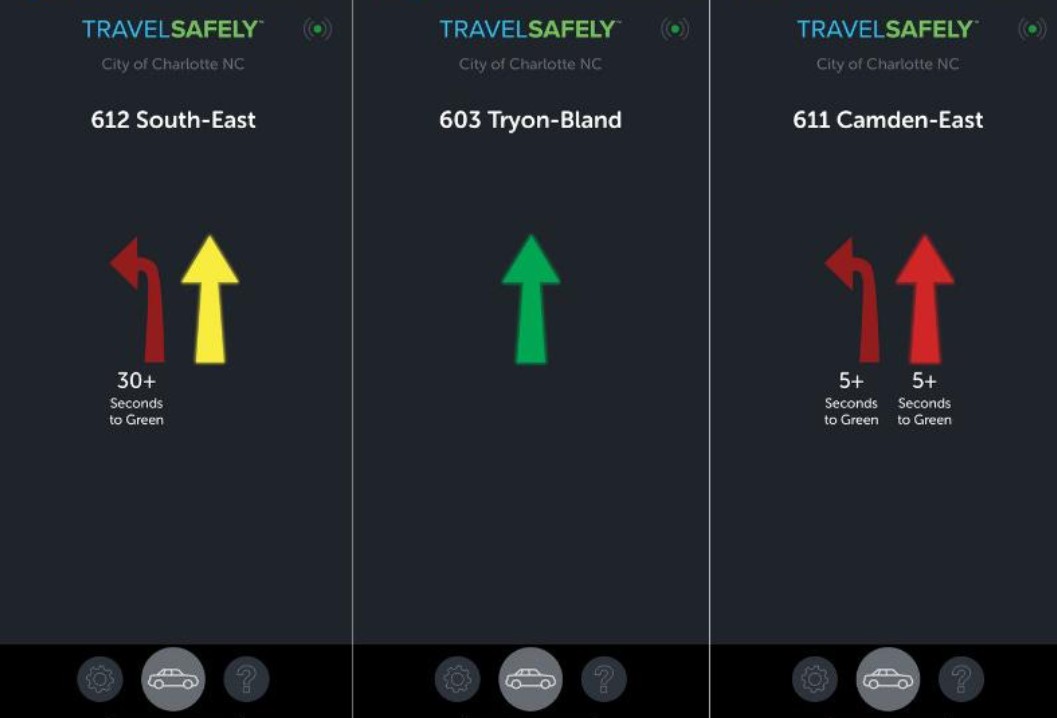 The app is also supposed to alert drivers of pedestrians and cyclists who are also connected to the TravelSafely network. Though there were a lot of people out on a sunny late morning in South End, none of them seemed to have the app.

The Applied Information spokesperson said that once more people download and use the app, it will be more helpful.

The driver mode has more features that I didn’t get to see during my test. According to a news release from the City of Charlotte, the app also notifies users if they are traveling too fast in a slow speed zone, warns motorists if a cyclist is using the app on the road ahead and notifies motorists of pedestrians using the app in the crosswalk ahead if it detects the motorist is not going to stop.

The app doesn’t seem to recognize light rail crossings on the road, at least not the one on East Carson Boulevard.

I parked on Hawkins Street and walked along Camden Street to test out the pedestrian mode. After walking for a while and not seeing any alerts pop up on my phone, I assumed the mode wasn’t working and emailed the TravelSafely help desk.

I received a phone call a few hours later from TravelSafely, and they explained that the pedestrian mode doesn’t show traffic light signals. Instead, it alerts drivers using TravelSafely when pedestrians are nearby. Pedestrians receive an alert when a TravelSafely driver is close to them, too.

Because the app just launched last week, there weren’t enough TravelSafely users out and about in South End on Monday morning, which is why the pedestrian mode appeared to not be working.

Since I didn’t encounter anyone else using the app, I didn’t get to observe the full potential TravelSafely has to prevent traffic accidents. But if more people download the app and use it, then TravelSafely might have a longer Charlotte lifespan after the pilot program ends in November 2023.

Lindsey Banks is a staff writer for The Charlotte Ledger. Reach her at lindsey@cltledger.com.