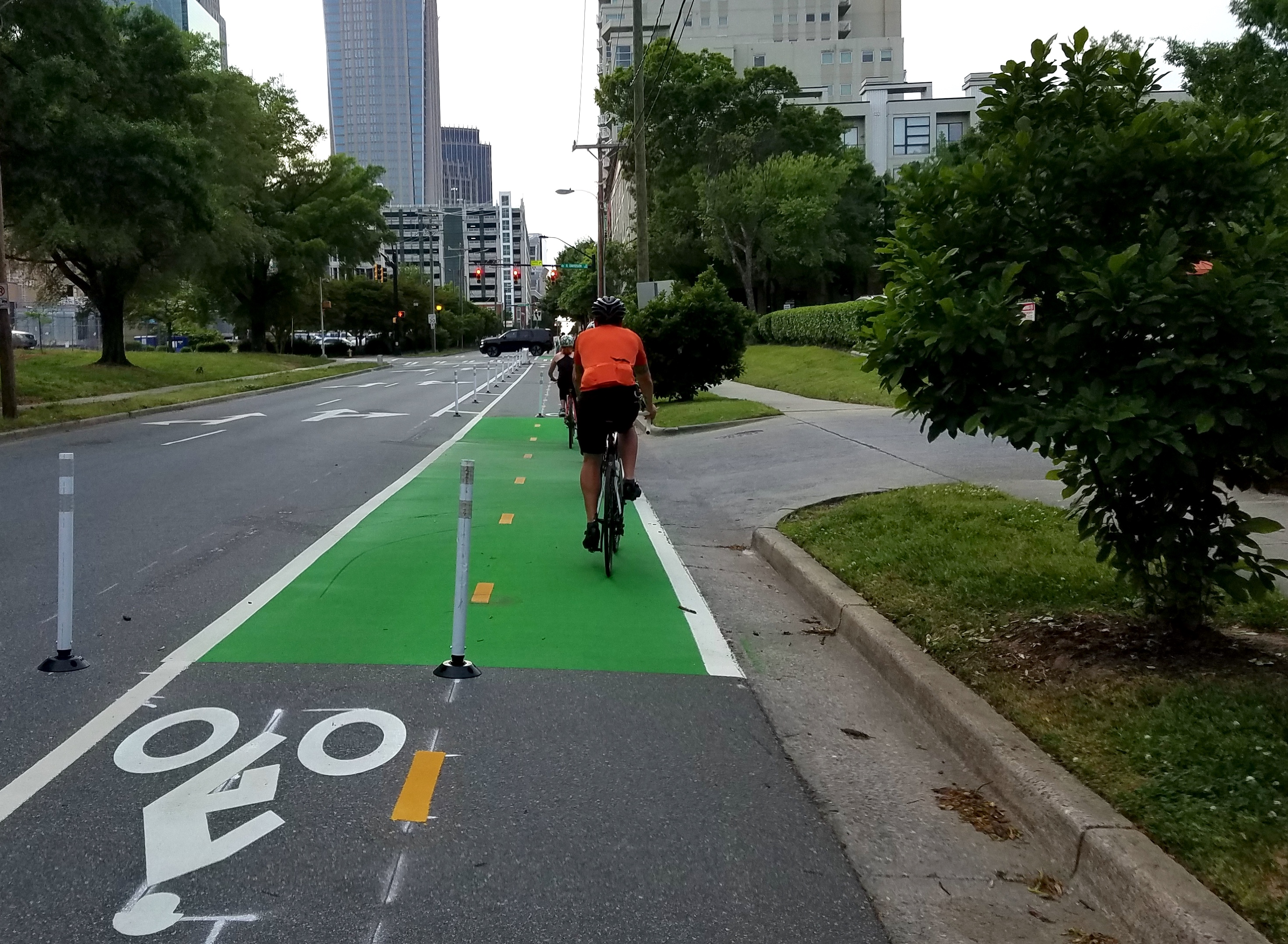 Cycling advocates hope the future of Charlotte biking is on display behind a row of plastic bollards lining Sixth Street - but they caution that the city has a long way to go.

The Charlotte Department of Transportation last week opened the city’s first substantial, protected, two-way bicycle lane, connecting the Little Sugar Creek Greenway near Central Piedmont Community College to the Rail Trail, via Sixth and Seventh streets. Running for about a mile, the lane - previously occupied by on-street parking - provides cyclists with physical separation from cars. It’s an upgrade from the narrow bike lanes defined by painted lines on streets that Charlotte has previously built.

Commuting by bicycle remains somewhat of an oddity in Charlotte, with fewer than 1 percent of people getting to work by pedal power, according to the US Census. Almost 90 percent of Charlotte workers commute via car, with the remainder working from home, walking, or taking public transportation.

Shannon Binns, executive director of Sustain Charlotte, said his group has been urging the Charlotte Department of Transportation to build a protected bicycle lane uptown for years. He hopes the mile-long pilot lane will spark more interest and show people that it’s possible to build bike infrastructure faster.

“It’s been a long-time coming,” said Binns. “I think it’s going to really help create some momentum for more of these facilities not only uptown, but across the city.”

The pilot project features a two-way bicycle path separated from traffic by a thicket of plastic bollards. CDOT’s ultimate plan calls for extending the protected lane another 1.5 miles, to Irwin Creek Greenway on the west side of uptown, and building permanent concrete dividers for the entire 2.5-mile length. That would be complete in 2021, according to the city’s timeline, giving uptown its first complete, dedicated east-west connection for bicyclists.

Riding in the new lane, cyclists have not only waist-high plastic bollards to separate them from cars, but far more space. The new lane is the same width as those used for motor vehicles. Instead of riding inches away from SUVs with only a paint stripe for protection, riders can cruise with feet to spare on either side. Bicyclists also enjoy the use of a three-second lead time on pedestrian crosswalks along the length of the protected lane, giving them a head start on cars.

On a ride Wednesday evening, hosted by Sustain Charlotte, CDOT and the Urban Institute's City Walks program, bicyclists mingled with the occasional scooter rider and pedestrian. A few had complaints about drivers weaving around the bollards to park in the bicycle lane, but the general consensus was clear: The protected lane is a big improvement over the narrow, painted-stripe lanes Charlotte has built its on-street network around.

The uptown “cycle track” isn't the only project Charlotte has in the works. There is also a one-block protected bike lane on Twelfth Street. Last year, City Council voted to spend $4 million to fund bicycle infrastructure, funding the city's plan with a separate line item for the first time in almost a decade, and Charlotte will use some of the proceeds from voter-approved transportation bonds to build at least 10 new miles of bike lanes per year.

Binns and other advocates view such programs as crucial to changing people's attitudes in Charlotte, a city that grew up in the automobile age where people often live far from where they work.

“We’re a city of cars,” said Binns. “Very few people relative to our population think of getting somewhere other than in a car.”

Binns said Charlotte needs to move faster on future projects. The plastic bollards and green paint took only about a month to install on Sixth Street.

“Quit worrying about these gold-plated projects - just do something,” said Binns. “We’ve been trying to challenge that mentality that bike lanes should take six years to plan.”

Adam Raskosie, chair of the city's Bicycle Advisory Committee, says he's cautiously optimistic. But then he revises himself - he’s optimistic, without the caution.

“We kind of really can’t continue as is, or we’re going to end up in a crisis,” he said. “If everyone who moves here is bringing their car and driving their car every single place they go, that’s not going to work...They’re not bringing their roads with them.”

Anecdotally, Raskoskie said he sees more people on bikes in Charlotte than he did five years ago. And he believes the city is moving faster than it has historically, pointing to the Sixth Street protected lane and a similar demonstration project in Plaza Midwood.

“We’re starting to think more critically about how we build our city,” said Raskoskie.

But changing the way Charlotte approaches land use planning to encourage more density in close-in nodes and areas around transit will be as important as building more bicycle infrastructure, Raskoskie said. Without dense development that’s within a comfortable bicycling distance from people’s homes, it will be difficult to convince a substantially higher number of people to use their bikes.

Binns said it’s crucial that Charlotte start connecting its bike network more comprehensively. Since it started in 2001, the city has painted more than 90 miles of bicycle lanes on local roads. That’s in addition to more than 40 miles of greenways in Mecklenburg County. Charlotte has largely relied on piecemeal additions, painting bike lanes and building paths when repaving or other development work is ongoing. That means a lot of the city’s bicycle lanes peter out, or have gaps that make navigation difficult.

The city’s own FAQ about bicycling notes that “combining bicycle lane striping with street construction and resurfacing is cost efficient, but it does result in bike lanes being scattered and disjointed until enough time has passed that a connected network begins to form.​”

“People are not going to ride a bike if these things are a lane here or a lane there,” said Binns. “These things need to connect.”

One major piece of bicycle and pedestrian infrastructure suffered a big setback earlier this year, when staff told City Council that the 26-mile Cross Charlotte Trail lacks necessary funding to finish it. The project - meant to link other greenways and trails criss-crossing the county - is approximately $77 million short, due to incorrect estimates. The city has not said how they plan to fund the shortfall.

Greenways and other mostly recreational bicycle facilities matter because that’s the main way people are introduced to riding in Charlotte. Robert Boyer, a former UNC Charlotte professor who recently relocated to Sweden, said his research found that riding a bike recreationally is the single strongest predictor of whether someone will commute by bike.

“The chances of someone riding to work increases very substantially when they ride for recreation,” said Boyer.

He said he’s “cautiously optimistic” about the future of bicycling in Charlotte, as the city invests more into its infrastructure.

But Boyer said Charlotte and other post-World War II cities face the daunting challenge of overhauling transportation systems that were always designed to prioritize cars.

“We have all these sunk costs in automobile infrastructure. It’s difficult to undo,” he said. “Charlotte has a really, really long way to go.”

“There’s a lot of resistance to shifting away from an automobile world,” said Boyer.

Looking for more chances to ride? BIKE! Charlotte runs through May 12, with organized rides and educational events for people of all skill levels.