Changing with a changing region and university 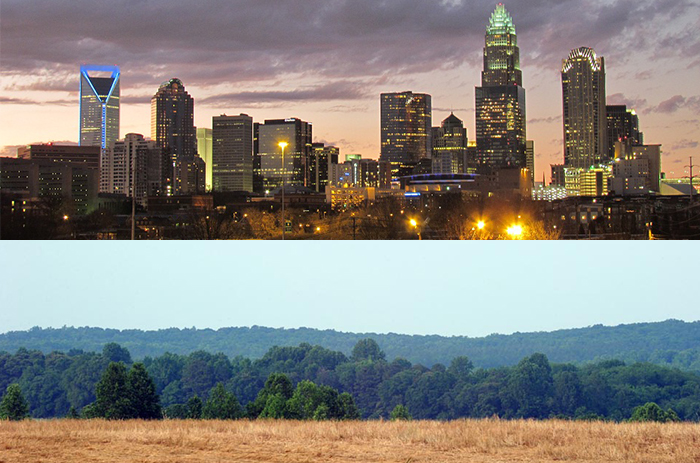 In the spring of 1967, Norm Schul was an assistant professor of geography at UNC Greensboro focusing on urban studies when his chancellor asked him to attend a gathering in Charlotte of business leaders, government officials and academics to discuss some of the big policy issues then facing the state’s urbanizing Piedmont. Sponsored by Duke Power (the forerunner of today’s Duke Energy) the event was called the Piedmont Urban Policy Conference and focused on issues like regionalism, economic development and infrastructure.

That event also attracted the attention of another university chancellor, Dean Colvard of UNC Charlotte. Colvard’s university had just entered the UNC system a few years earlier, and Colvard had been recruited to serve as its first chancellor. His views about the role of higher education in American society had been greatly influenced by two well-established land grant universities where he had worked (Mississippi State and N.C. State), in particular their missions of public service and outreach to the communities and states they served. Colvard was convinced that UNC Charlotte, in the Carolinas’ largest city, was destined to serve a similar mission of public service and outreach to become the UNC system’s “urban research university.”

Schul isn’t sure how he initially came to Colvard’s attention at that conference, but an associate of the UNC Charlotte chancellor tracked him down in the parking lot as he was preparing to return to Greensboro and asked if he would be willing to meet with Colvard. From that initial conversation emerged a years-long collaboration that resulted in Schul coming to UNC Charlotte to establish the university’s Department of Geography & Earth Sciences and in 1969, to create what would become the UNC Charlotte Urban Institute. He became the institute’s first director.

Nearly 50 years later, Norm Schul can recall with vivid detail the successes that would establish the institute as one of the major forces for understanding urbanization and regionalism in Charlotte and the Carolinas. He has also observed how the region and UNC Charlotte have evolved through the decades and how that change has required the Urban Institute to adapt in order to maintain its relevance.

Today, Charlotte has emerged as a more complex and sophisticated urban region, but the surrounding counties – once so inextricably tied to Mecklenburg County and one another through the textile industry – have become less cohesive. Those counties closer to the urban core are flourishing, while those farther out struggle with the effects of a decades-long decline in manufacturing.

At UNC Charlotte, what was once a small, undergraduate university serving mostly kids from the Charlotte region (many of them first-generation college students) has evolved into a major research university, attracting students and faculty from diverse backgrounds and disciplines. In 1992, the university took its first steps toward offering Ph.D. programs, a change that, combined with dramatic advances in technology and the accessibility of data, has elevated the level of research now available to address regional issues.

Through all that change, the UNC Charlotte Urban Institute’s mission has remained consistent – to combine academic research and public engagement to seek solutions to the economic, environmental, and social challenges facing communities throughout the Charlotte region. Yet, beneath that consistency of mission is a dynamic organization, continually adapting with the times. And central to the institute’s recent success has been its embrace of the university’s maturing graduate programs and the quality of talent those programs are attracting to Charlotte.

That talent has allowed the Urban Institute to play an important role in helping the public better understand complex policy issues in the Charlotte region. Several years ago, the institute partnered with the university’s Center for Applied GIS and Charlotte Visualization Center to model changes in urban growth throughout North Carolina. In another collaboration, the institute last year joined a research team led by Dr. Lori Thomas in UNC Charlotte’s School of Social Work to evaluate a community effort to house individuals experiencing chronic homelessness through a housing first approach.

The latest example of the institute tapping the talents of faculty and students from the university’s graduate programs is a new, two-year initiative funded by The Duke Endowment, called “Urban-Rural Connections,” created to address the growing economic disparities between Charlotte and nearby rural communities. Dr. Bill Graves from the Department of Geography & Earth Sciences is lending his expertise in economic development and urban transformation to better understand existing linkages between Charlotte and its more rural neighbors and to identify possible strategies for economic renewal in those communities through stronger ties with Charlotte’s urban core.

In addition to Graves’ research, the Urban-Rural Connections project will benefit from the talents of Chris Danis, a Ph.D. candidate in UNC Charlotte’s Public Policy program. She is assisting the institute in researching stories of the region’s rural communities and their relationship with an urban neighbor that, to some, seems increasingly disconnected from their economic reality and sense of cultural identity. Having spent years examining the interdependency of communities on a regional scale as a planner in New Jersey, Danis exemplifies the sort of diverse talent and expertise that UNC Charlotte’s graduate programs are attracting and the contributions they have to offer to the Charlotte region.

It seems fitting that the Urban-Rural Connections project will be one of the Urban Institute’s signature projects leading up to its 50th anniversary in 2019. With its focus on regionalism and its use of the intellectual talent attracted to UNC Charlotte, the project embodies much of the original vision that early leaders like Dean Colvard and Norm Schul had for the university in 1969. The growing partnership between the Urban Institute and UNC Charlotte’s graduate programs is one of many drivers that are leading to the realization of a 50-year vision of UNC Charlotte becoming “North Carolina’s Urban Research University.”