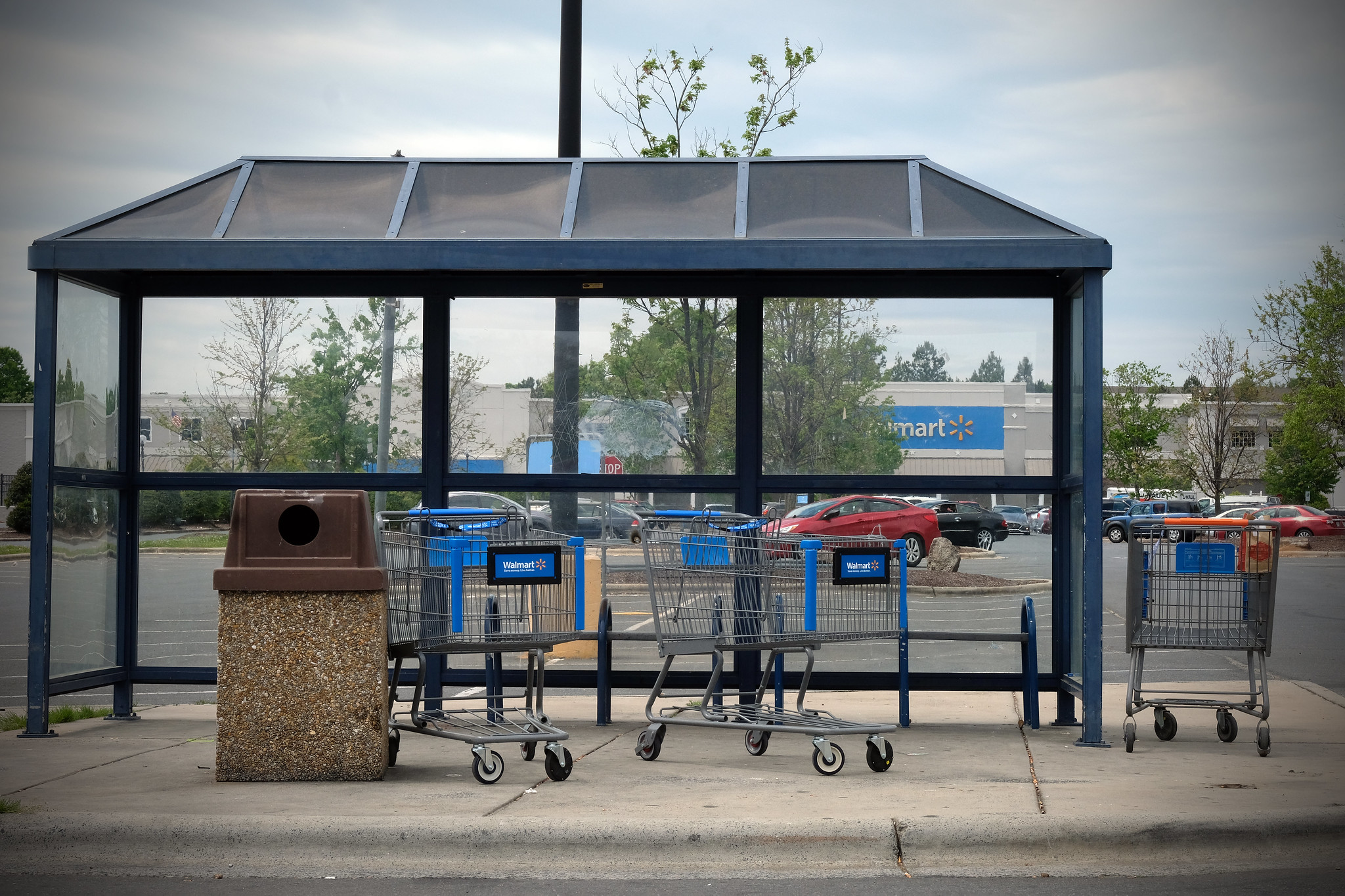 As the Charlotte Area Transit System continues struggling to fill bus driver positions, the agency could soon implement bus service cuts to deal with the shortage and create a more reliable schedule.

For months, CATS has been dealing with a flood of unscheduled sick days, which the transit agency has blamed on a “loophole” in its contract with drivers allowing them to take up to 40 unscheduled days off per year. As a consequence, bus riders have faced unreliable schedules and buses that never show up. In recent weeks, CATS has taken to posting a tweet each morning listing how many drivers are absent and warning customers to expect delays.

Cutting service frequency goes against CATS’ goal in recent years of getting buses to run more frequently to attract riders. Lewis has said he hopes all buses could get to 15-minute or better frequency, and called the system’s long “headways” (as the time between buses is known) "unacceptable."

But CATS simply isn’t able to run its current schedule, Lewis said, leaving riders waiting for buses that might not come. Cutting down service to something the agency can handle will fix that, and the reductions will remain in place until more operators can be hired.

“I believe this is a short-term strategy,” said Lewis. CATS will present its full plans to the Metropolitan Transit Commission, its governing board, at the end of the month.

For real-time info on your route, download the CATS-Pass app: https://t.co/WGPCM1wRh9…

Thanks for your patience as we work to address the industry-wide labor shortage.

The math behind the cuts

To run its full weekday schedule of buses, CATS needs 292 drivers. Lately, the agency has fallen well short of that:

In May, Lewis said the system averaged 23 drivers short each day – some days as many as 50. The proposed cuts would reduce the number of drivers CATS needs each weekday to 242, allowing it to meet staffing needs.

Drivers in Charlotte have been working in-person since the start of the pandemic. They’ve also raised safety concerns after two shootings on CATS buses, including one that left an operator dead in uptown Charlotte.

Lewis pointed to other cities, including Portland, Atlanta and Austin, that have cut service while dealing with driver shortages.

“We tried to hold the line on that and provide a higher level of service,” said Lewis. “But I think this spring, this became a challenge for us to continue… with the ongoing labor shortages that were finally catching up with CATS.” 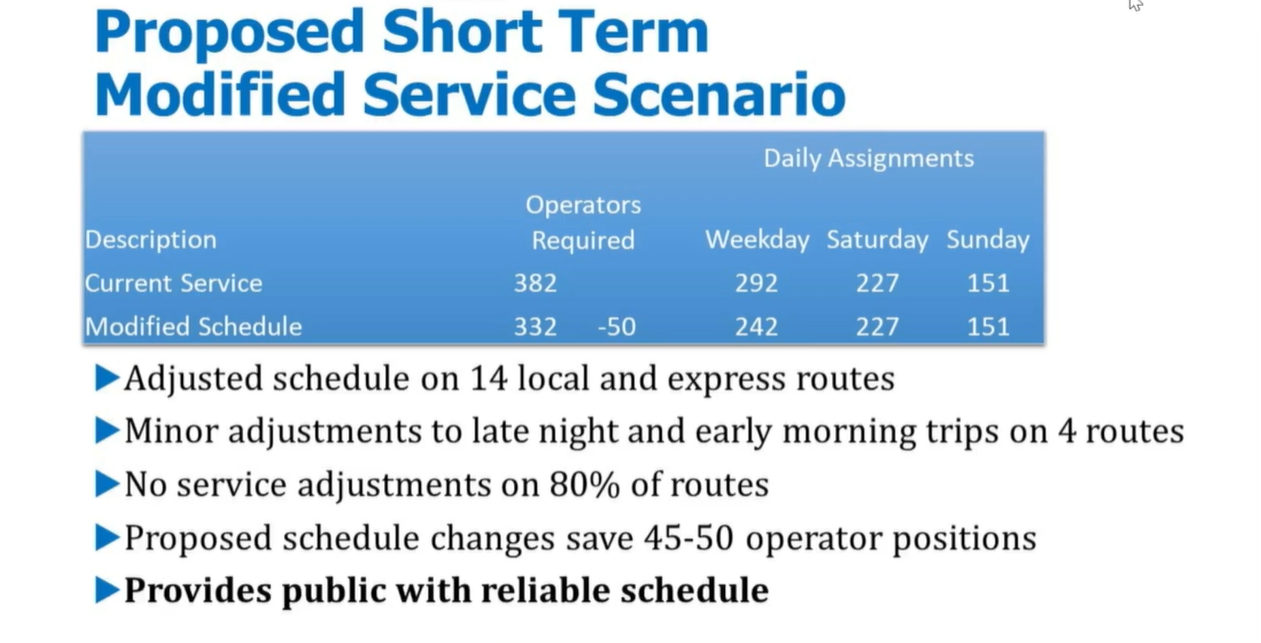 Lewis said he’s hopeful that a recent increase in CATS budget will allow it to pay drivers more, helping with hiring and retention. CATS’ operating budget increased almost 14%, to $211 million, in the city’s plans for the new fiscal year.  That could allow CATS to increase driver pay by a double-digit percentage, which Lewis said would be the largest-ever increase.

Drivers currently average $25 an hour, Lewis said. Starting pay is $18 an hour. The issue of pay and negotiations is complicated because bus drivers don’t actually work for CATS – they work for the local subsidiary of a third-party management company, RATP Dev.

That’s because federal rules require that transit employees be allowed to organize, while state rules in North Carolina forbid public sector unions. So, as a workaround, the drivers are employed by and negotiate with Transit Management of Charlotte.

Contract negotiations have been ongoing for about eight weeks, Lewis said. RATP Dev’s contract as CATS’ outside management company ends next year, and Lewis said the agency will put the new contract out for bids.

Lewis also responded to questions from Mayor Pro Tem Julie Eiselt about the CATS app’s live-tracking capabilities for buses. Lewis said the app is reliable and shows GPS data for real-time bus locations – for buses that are running. But when a bus doesn’t run at all – say, because a driver didn’t show up and the bus route was canceled – the app defaults to showing the scheduled bus as if it were running on time.

That can be misleading, because it shows riders the next scheduled bus even though that scheduled bus has been canceled. Lewis said CATS is trying to address the problem with its vendor.

Although COVID-19 crushed transit ridership nationwide, bus ridership has been falling since before the pandemic. Charlotte bus ridership peaked almost a decade ago, and has fallen steadily since. 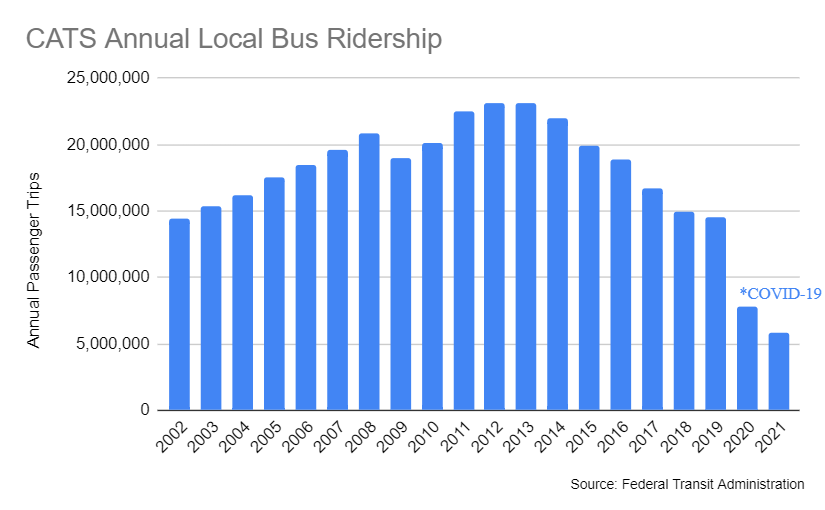 The reliability problems appear to have continued to depress ridership this year, even as the pandemic faded, the economy rebounded and gas prices shot up. In May, ridership on local buses fell almost 15% compared to the previous year. So far this fiscal year, local bus ridership is down 2.5% compared to 2021, at just under 5 million.

Ridership on the Blue Line light rail is up 48%, by contrast. But the bus system still carries the bulk of Charlotte transit riders: The light rail has accounted for almost 3.5 million trips so far this fiscal year.