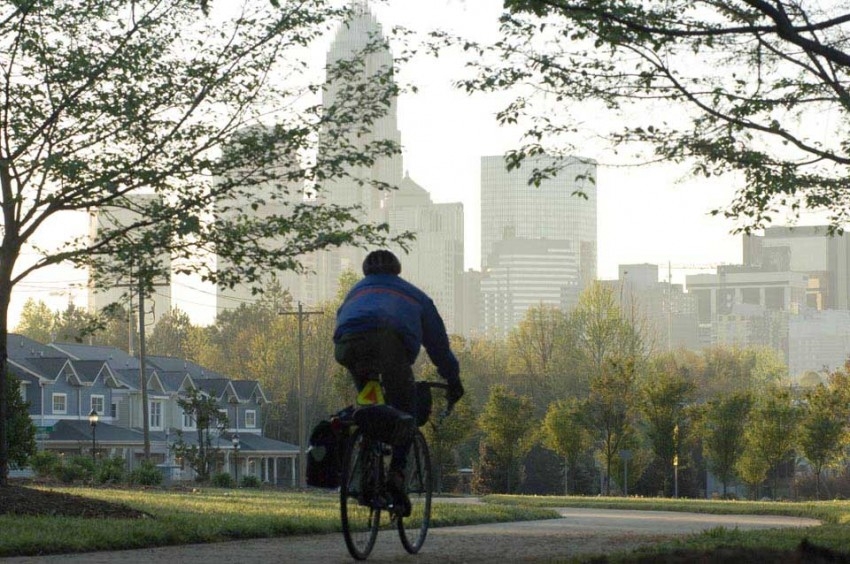 Proponents of bicycle sharing are striving to launch the state’s first system in and near uptown Charlotte as soon as this summer.

The system would give paying members access to a fleet of 200 high-tech bikes secured at a network of 20 stations in and around uptown.

Bike sharing began in Europe in the 1960s, and there are now hundreds of systems worldwide. Charlotte is among more than 20 U.S. cities that have or are planning such systems.

In the Washington, D.C., area’s Capital Bikeshare system, for example, you sign up online or swipe a credit card at a solar-powered, ATM-like station to buy a membership that lasts anywhere from a day ($7) to a year ($75). For the duration of your membership, you can take as many trips as you’d like, using one bike at a time to travel between any of the system’s 140 stations. Trips lasting longer than 30 minutes incur additional fees.

Some details – including how a Charlotte system would be financed – have yet to be determined, but proponents say bike sharing could revolutionize transportation in the city while benefiting public health, the environment and the economy.

“We really don’t bike as much as we could,” Billings said. “The power of bike sharing is completely changing that dynamic.”

“The cities that are pursuing these (systems) are cities that are competing and seeking to attract the creative class and trying to provide transportation options,” Gallagher said. “I think Charlotte’s one of those types of cities.”

Bike sharing also is often hailed as a way to expand access to other public transit networks.

Bike-sharing systems – including the “smart bikes” and locking stations that enable organizers to keep tabs on bikes – cost $4,000 to $5,000 per bike, the proponents say. Those figures do not include ongoing operating expenses.

Charlotte’s proponents seek to raise some or all of the needed money from private sources. They are pursuing both corporate dollars and in-kind donations and hope to reveal financial details within 60 days, Billings said.

The council’s Transportation and Planning Committee in November directed staff to work with Charlotte Center City Partners and the convention’s host committee to explore the possibility of bike sharing in Charlotte.

Although Charlotte’s system would start uptown, proponents who have studied other cities’ experiences expect there would soon be demand to expand to other parts of the city, perhaps to UNC Charlotte or other employment and activity centers. 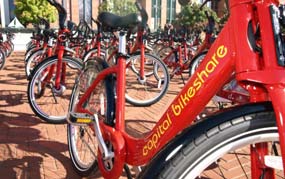 At February’s meeting, city officials suggested Center City Partners would own and operate the system at first. The city could later take it over, they said.

Two council members raised questions about the safety of bike sharing in Charlotte.

John Autry asked whether users would be allowed to travel in areas without bicycle amenities such as bike lanes. City officials said users could go wherever they pleased but the city would try to put stations in areas where cyclists would be comfortable.

In subsequent interviews, proponents acknowledged Charlotte is not uniformly bicycle-friendly but said many areas are conducive to cycling. The city has almost 150 miles of bikeways, which include greenways, bike lanes, and signed routes on some streets with slower speeds and not much traffic. That’s more than many cities that have implemented bike-sharing systems, Gallagher said. “Our system is not perfect, but we do think with some attention to detail and evolution of the bicycle network, we can provide a system that would be safe and comfortable to most users,” he said.

Committee chairman David Howard asked whether users would be required to wear helmets. In interviews, Gallagher said most bike-sharing systems don’t require helmets, but Billings said Charlotte’s system would strongly encourage them. Charlotte’s system likely would require users to be at least 16, she said. State law requires helmets for cyclists younger than that.

Asked about the committee’s safety concerns, Martin Zimmerman, executive director of the nonprofit Charlotte Area Bicycle Alliance, said safe cycling depends as much if not more on training cyclists and drivers as on infrastructure such as bike lanes. Cities such as New York, Washington and San Francisco have programs to teach cyclists basic skills, rules of the road and etiquette, but Charlotte does not, he said.

“Except for the 16 neighborhoods and the center city business core called ‘uptown,’ Charlotte is basically a suburban, auto-dependent physical plan with narrow, winding streets, few sidewalks (biking on sidewalks in Charlotte is legal) and drivers who are not used to seeing bicyclists, partly because so few bicyclists are to be seen,” he said in an email. “On the other hand, it is a ‘chicken and egg’ conundrum because ‘if you do not build it, they won't come.’ ”