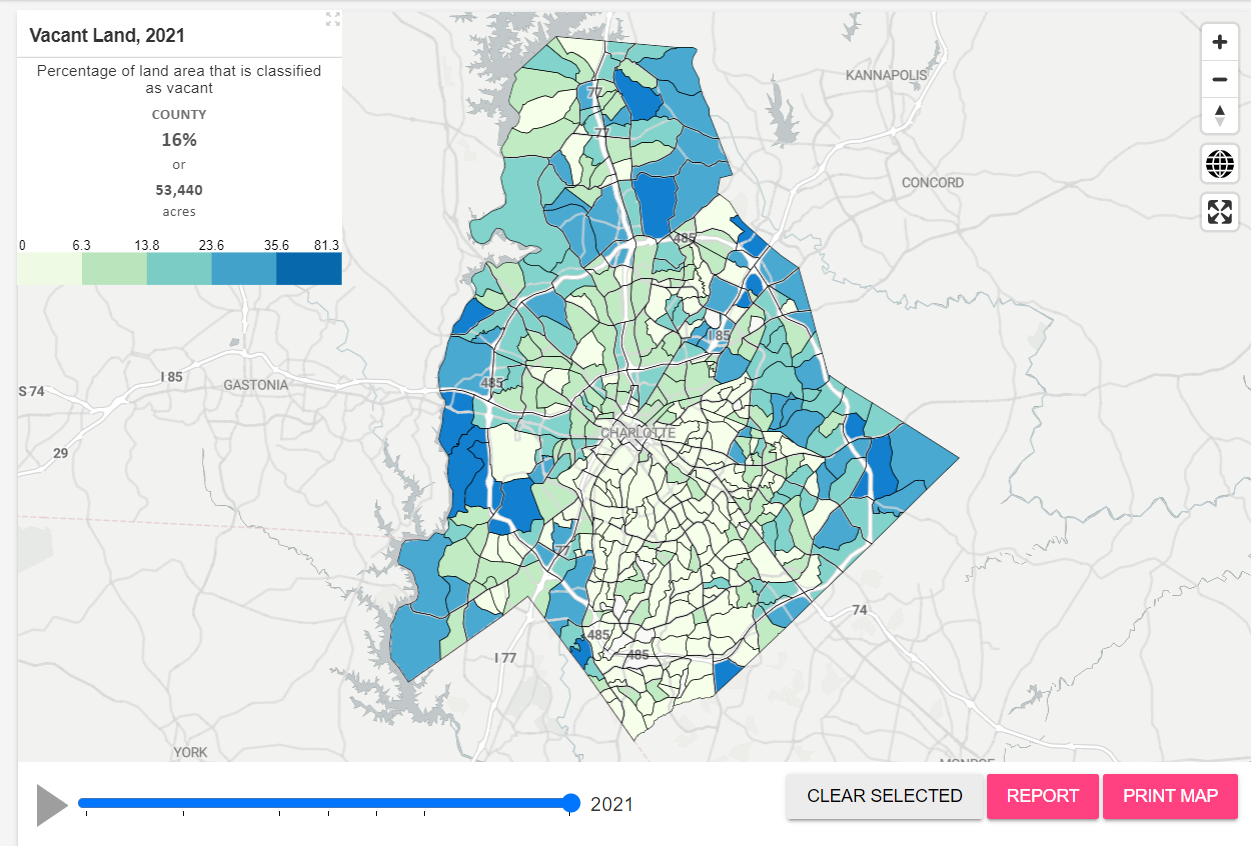 Which parts of Charlotte use the most water? Where is our growth eating up whatever vacant land is left in Mecklenburg County? Where are the racial, economic and other dividing lines that crisscross our community?

You can answer these questions and more with the updated Quality of Life Explorer maps published online today. A joint venture between Mecklenburg County, the city of Charlotte and the UNC Charlotte Urban Institute, these free, customizable, interactive maps allow you to visualize more than 80 sets of data broken down along geographic lines.

Drawing on variables from multiple sources, the Quality of Life Explorer maps also allow you to see how the data has changed over time. Use the slider at the bottom of each map to see previous years and watch the shifting patterns in Charlotte and Mecklenburg County.

You can find all of the maps online here, as well as links to additional data and an explanation of the context behind each map. Check out a few selections below:

In 2011, 18.3% of the land in Mecklenburg County was classified as vacant. That's shrunk to 16% in 2021, as development increasingly turns fields and woods into subdivisions and shopping centers. In real terms, that translates to almost 8,000 acres developed over the decade. And the biggest single remaining vacant area – a large tract west of the airport – will soon be developed into the River District mixed-use project.

When it comes to where we live, Charlotte and Mecklenburg remain largely divided along racial lines. You can see that in these maps of White, Black and Hispanic populations.

But while the divisions remain stark, you can also see changes over time. Pull the sliders back two decades, to 2000: You’ll see how many areas that were once majority White have become increasingly diverse. And the Hispanic population, once confined to a few pockets in east Charlotte, has spread substantially during that time, though Hispanics remain concentrated geographically.

There’s no way around it: We make a lot of trash in Charlotte. To be specific, Charlotteans generate 1,864,894 pounds per day of residential solid waste, or an average of 8.7 pounds per housing unit.

That waste isn’t distributed equally, however. Some areas generate much more than the average, while others generate less.

We also recycle at different rates. Residential solid waste diversion averages 25.8% of the total. But again, those rates vary dramatically, with waste diversion rates ranging from the high-40%-low-50% range in some neighborhoods to the low teens or even single digits in others.

Building, renovating, and tearing down houses

During the pandemic, a lot of people decided to move or renovate their house. The total number of renovations permitted in Mecklenburg has been rising for years, but increased sharply in 2020. In 2021, the number of permitted renovations was approaching double that of a decade ago — and was much more concentrated in some areas than others.

And new housing construction has grown as well, though with a somewhat more diffuse concentration.

Go to south Charlotte, and the percentage of single-family houses that are being rented out falls to the low single digits in many neighborhoods.

Calls to police about crime also aren’t distributed evenly across the county. And though reported property crimes have fallen, violent crime reports have increased over the past decade.

You can check out all of these maps, surrounding context and more at the Quality of Life Explorer. These maps are also fully embeddable, allowing community members to use them on other websites.