Finding the Music, Part 2: 'We needed to do something bold' 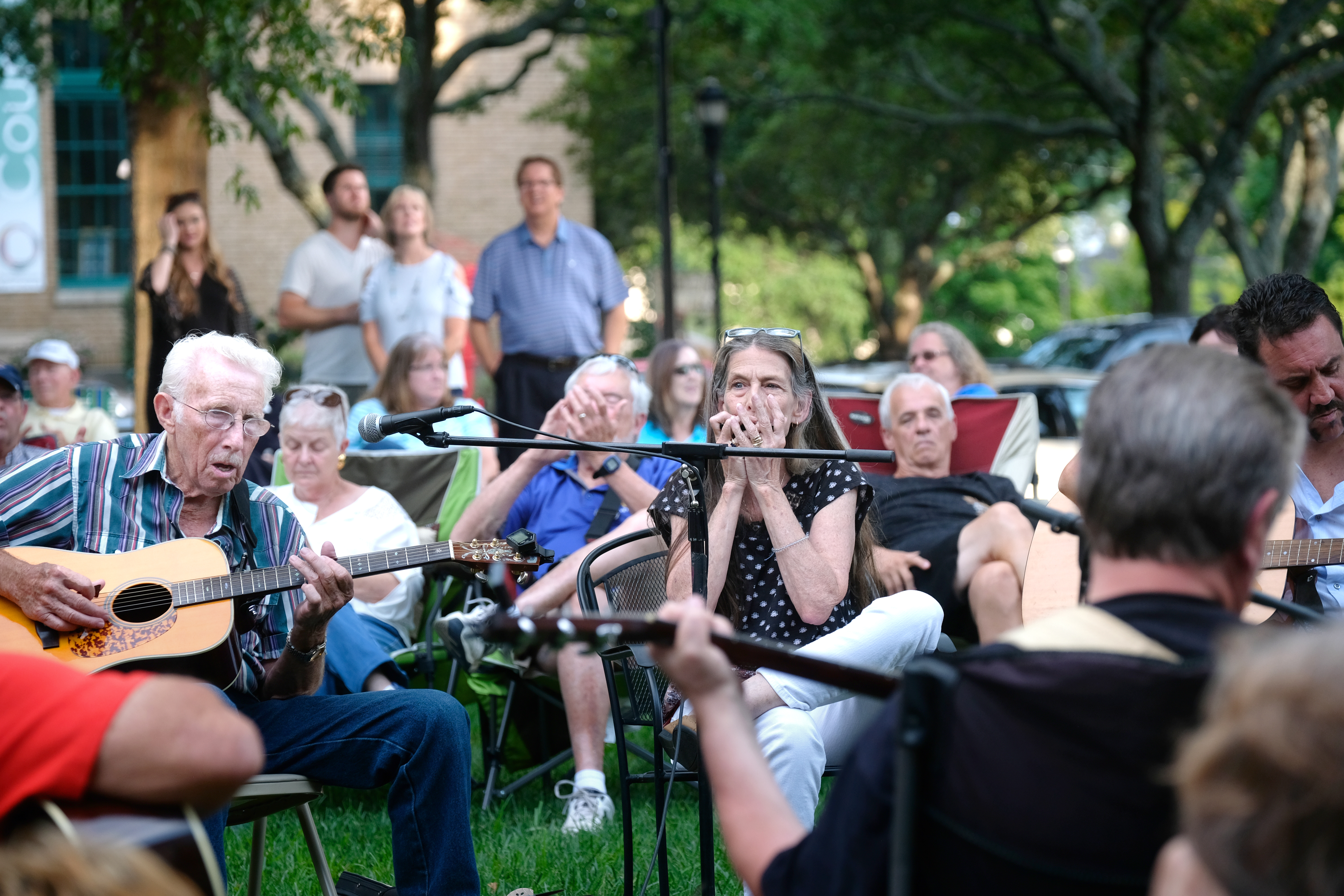 This is the second part in a three-part series. Read Part 1: Turning to musical heritage to fuel the future to catch up on the story. You can find Part 3: 'A 38-year overnight success story' online as well.

What happened in Shelby played out across the Carolinas, where textiles were once the driver of small-town economies.

Shelby’s mills once paid some of the state’s highest wages. The industry’s long collapse in Cleveland County started in the late 1940s with a boll weevil infestation that destroyed the state’s largest cotton production, and ended in the late 1990s and early 2000s when global trade policies expanded markets, flooding the United States with cheaper goods.

With little warning, Carolinas mill owners closed operations at home and sent jobs to countries like China, India and Vietnam. By the early 2000s, Cleveland County was wrestling with some of the state’s highest unemployment numbers.

Chris Canoutas, whose father Nick and uncles bought the Shelby Cafe (“Home Cooking Since 1922”) on South Lafayette Street in the 1960s, witnessed the devastation to uptown.

“My uncle used to open the cafe at 2:30 in the morning so they could serve the third shift getting off work from the mills,” said Canoutas, who returned to Shelby in 2008 to open Pleasant City Wood Fired Grille. “The place was packed. That went away when the mills closed. That hurt. The big major department stores had already closed or moved to the mall. That really hurt.

As other cities in the region remade themselves, a recovery fueled largely by Charlotte’s boom, Shelby and Cleveland County found some traction, but not enough to fully revive uptown. The city belongs to the Charlotte metropolitan area, but benefited little from Mecklenburg County’s spillover.

A 55-minute drive west, Shelby is too far from Charlotte to become a bedroom community like Concord in Cabarrus County or Belmont in Gaston.

“That’s a double-edge sword,” said Shelby architect and brewery owner Roger Holland, a native Shelbyite who was the Scrugg Center’s architect. “We’re too far away from Charlotte, and not on I-85. But that’s a positive thing too. We’ll never lose our identity and become just an outskirt of Charlotte.”

Forced to get creative

The distance forced Shelby to get creative. In 1982, the nonprofit Historic Shelby was formed to buy and restore historically prominent structures. The group worked to expand the city’s historic district and protect several key buildings.

A year earlier, Shelby was designated one of the country’s first Main Street cities. The National Trust for Historic Preservation program helps struggling downtowns in cities 50,000 or smaller.

Led by the Uptown Shelby Association (get it: USA?), the program has been uptown’s biggest cheerleader, promoting the business district and its historic structures. It advocates for restoration and adaptive reuse. It provides technical assistance and guides business owners on tax incentives for historic properties. More than $10 million has been invested in state tax credit projects, according to USA. It also organizes festivals and events to lure people uptown.

With uptown still a work in progress, Holland said, it took the Scruggs Center and Gibson Theatre to trigger confidence that uptown was on its way back.

Much to crow about

The process for Destination Cleveland County’s volunteers was well-researched and incremental. The group considered all of Shelby’s assets and the work of other cities before making their decision.

The city produced two N.C. governors — O. Max Gardner (1929-1933) and his brother-in-law Clyde Hoey (1937-1941), leaders of the so-called “Shelby Dynasty.” Gaffney-born journalist W.J. Cash wrote much of his seminal book “The Mind of the South” while living in Shelby and Boiling Springs.

In 1973, Shelby-raised movie producer/actor Earl Owensby, nicknamed “the Dixie DeMille,” built a movie studio that at the time was the largest outside of Hollywood. Some credit Owensby with pioneering the movie industry in North Carolina.

Basketball great David Thompson, nicknamed “Skywalker” who once scored 73 points in an NBA game, launched his star in Shelby.

And then there’s novelist Thomas Dixon, one native many Shelbyites would prefer to forget. Dixon was a virulent white supremacist, whose two best-selling novels “The Leopard Spots” and “The Clansman: A Historical Romance of the Ku Klux Klan,” glorified the KKK as heroic vigilantes. His writings inspired the making of director D.W. Griffith’s 1915 film “The Birth of a Nation.”

But it’s Scruggs and Gibson who’ve universally stoked abundant community pride — though  some Shelbyites were critical of using them as cultural brands to revive their city.

Past time to honor Earl, Don

J.T. Scruggs, whose father Junie was Earl’s older brother, thought it was past time Shelby honored his uncle and Don Gibson. In 2004, with the courthouse sitting empty, two Shelbyites recruited Scruggs to find a way to use the building for a proper shrine to the two.

Their effort had fizzled a year later when the local Chamber met for a fall retreat. David Dear, then Cleveland County’s manager, was worried about the fate of the courthouse and the artifacts that had been abandoned by the museum. The group suggested he call David Jenkins at N.C. State University, a strategic planning consultant who has helped 30 towns and counties across the state reinvent their struggling downtowns.

Dear made the call and Jenkins agreed to help Shelby if the city assembled a task force with a cross-section of Shelbyites led by dynamic leaders. Immediately Dear called Brownie Plaster and J.T. Scruggs.

“We had a courthouse in bad shape and a downtown that was half empty,” Dear said. “We needed to do something bold.”

In early 2006, Jenkins drove to Shelby for a tour led by Plaster. It included the courthouse and the old movie house, covered in spiderwebs. “It was a beautiful downtown, but it was desolate,” Jenkins said. “I told them there’d be tumbleweeds rolling through the streets if they didn’t do something.”

Plaster told Jenkins her group of 30 volunteers had some ideas, including building a better local museum — with a room dedicated to Scruggs and Gibson.

He said he was blunt with her: “Many towns across North Carolina, east to west, make the same mistake. They take these old courthouses and turn them into historical centers. Those local museums don’t draw people in from the outside.”

Jenkins gathered the volunteers for several weeks of brainstorming and asked them to imagine  their ideal downtown. Responses were quick: a vibrant center of commerce with restaurants, taverns, galleries and the kinds of shops that would give people a reason to come uptown.

“He told us that we’d gotten used to pain, that when something else closed uptown, it hurt but we were used to the pain,” Plaster said. “He said the failed museum was a wake-up call, and that when we talk about uptown we ‘can’t just talk about the failed museum, but the whole town. It’s dying.’”

His message was clear: Whatever Destination Cleveland County conceived needed to generate energy that would lift up all of uptown. Jenkins urged them to explore what transformations other cities had made and lock in on a theme that set Shelby apart.

“As a group, they understood that if they wanted their children and grandchildren to stay or go away to college and come back, things couldn’t be the same as it was,” said Emily Epley, a former Destination Cleveland County executive director and now Cleveland County’s tourism chief.

Focus on one ‘unique asset’

They paired up and hit the road armed with a cruel lesson: 93 percent of all museums operate at a loss. But this: Get them there, tourists do stay longer and spend more money. They went to the Newberry Opera House in Newberry, S.C., built in 1881, rescued from demolition in 1959 and restored in the 1990s for concerts, plays and movies.

They drove to Hiltons, Va., to see the Carter Family Fold, a performance hall dedicated to the musical Carter family, (Johnny Cash’s in-laws considered the first family of country music), with a mission of preserving country and bluegrass music. One pair stopped in Smithfield in Johnston County, actress Ava Gardner’s hometown, to visit the Ava Gardner Museum.

Yet when they mentioned Shelby’s claim to Earl Scruggs and Don Gibson, they got the same response: “Eyes got real big. ‘You do? That’s it! That’s a winner!’” Plaster said. “A lady in Newberry said ‘why are you looking any further? Why don’t you just get started?’ But we all had to do our own research to make sure that really was it.”

Some Shelbyites pushed back. “Everyone knew we had to do something, but not all were sure that Earl and Don were the right thing,” Scruggs said. “I felt, and others felt that if we couldn’t draw people with Earl and Don, then nothing would draw them to our downtown.”