Growing peas and finding peace in the Piedmont 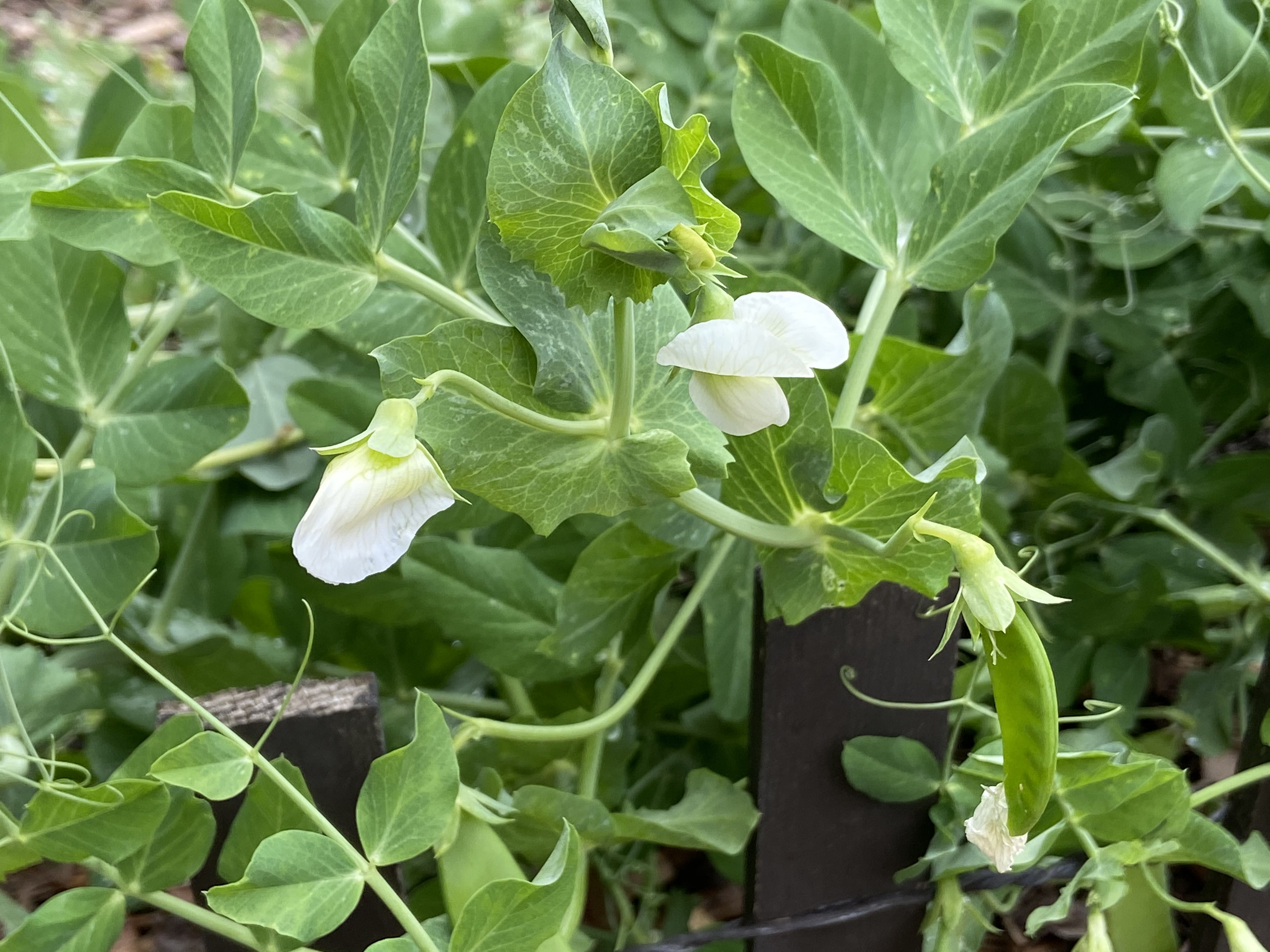 The English peas are finished. Given the long spell of mild weather we’ve enjoyed this year, I’d hoped this cool-weather crop might last a bit longer. Alas, they still flamed out in a matter of weeks. English peas (Pisum sativum) are the very essence of a Piedmont spring – sweet and tender and all too fleeting.

Homegrown tomatoes win universal praise – grocery store tomatoes can’t match their texture and flavor. The same is true for peas. Once picked, their sugars quickly turn to starch. Fresh ones are rarely seen at farmers markets, let alone in grocery stores. Why aren’t they equally prized?

If you long for sweet, tender peas, there’s really no choice but to grow them yourself, which fewer people in the Piedmont seem to do these days. Some say our weather has become too erratic – peas don’t like abrupt shifts from winter to summer. For the casual gardener, it might be a lack of imagination or faith. It’s one thing to tuck a tomato plant into the sun-kissed earth of April, but quite another to trust a seed to the cold, dark soil of winter. Or maybe we’ve just become too risk-averse, unwilling to endure the possibility of wasted effort and heartache.

Back in the day, when my family still planted English peas in the Uwharries, we sowed the long rows in late February. In the heat island created by my urban neighborhood in Charlotte, I push that ahead by three or four weeks – not without trepidation – but thus far, my crops have never failed me.

I’ve tried several varieties over the years, including Iona, Wando and Progress #9. The ones that claim to be heat tolerant really aren’t – at least in these parts – and that purported trait seems to come at the expense of flavor and texture. So I keep searching for the perfect pea. I’ve just placed an order for Tom Thumb, a variety Jefferson grew at Monticello. My obsession with peas pales in comparison with his. He grew at least 15 varieties and devoted an inordinate amount of garden space to them. He also had a friendly competition with his neighbors to see who could bring the first peas to table.

This year, I planted only two eight-foot rows, which produced about ten cups of peas. When you harvest them young and small, it takes a lot of time and effort to amass a scant serving. My daily yield is generally less than half a cup, so I freeze them immediately after shelling until I collect enough. I now understand why subsistence farmers like my ancestors let the pods swell — and why the peas on their tables had the great misfortune of resembling dog ticks. When they’re tough and mealy, you have to cook them long and slow.

I grade my peas as I shell. Most make their way into a simple dish of pasta or risotto. The tiniest ones are best left raw in a salad (or eaten out of hand like candy). The toughest still make an ethereal soup. Potage Saint-Germain pairs them with lettuce and mint, which are also at their peak in the springtime garden. Noted food journalist Francis Lam appreciates the charm of peas that might be past their prime and offers humorous advice on how to treat them right and not be “a pea abuser.”

Shelling peas doesn’t jibe with our high-tech, frenetic lives. It’s slow and repetitive. For me, a craft beer and music ease the tedium. I like shelling to Heirloom Music, Jimmie Dale Gilmore’s ode to Depression Era tunes. I get in the groove, imagining my forebears working to the very same songs. The moment quickly passes. Electricity didn’t reach the Grissom farm until the late 1940s. There would have been no radio during that period. To my knowledge they weren’t musically inclined – that’s Mama’s side of the family – so they probably sat on the porch telling stories or listening to the music of nature.

I have to resist the urge to romanticize their lives. Far more likely, my grandmother gathered the peas after breakfast then raced to have them ready for their midday meal. She must have been impatient at times. She must have had a long list of other things she needed to do. But when the task at hand puts a buffer between your loved ones and hunger, you get your priorities straight. In that moment, feeding them becomes the most important thing.

I suspect the Grissoms grew peas not because they were epicures like Jefferson, but because they took advantage of a period when the garden would otherwise lie fallow. They had to put the land to use and maximize its contribution to their sustenance. I wonder if they would have embraced the increasingly popular sugar snap pea. It’s certainly more efficient to consume the fleshy pod.

These days, growing English peas in the Piedmont is strictly a labor of love. For the thing itself and for those you feed. I make time for them. I sacrifice other endeavors to bring them to table. You don’t get rich and famous growing and shelling peas. But you do learn how to slow down, reconnect and savor the moment. You might achieve the same thing with meditation or yoga, but I prefer peas. I’ve heard it’s possible – at least in warmer climates – to grow a second crop in fall. Right now, I like the sound of possibility. I’m planning to give it a try.

There’s never been a better time to double down on love and hope.