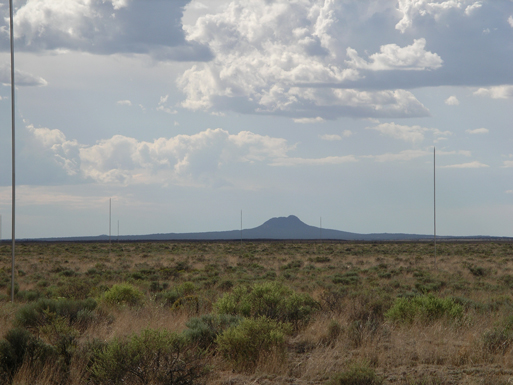 In the early 1970s, a group of artists rebelled against the market-driven forces in New York.  They moved out West and began to use the earth as their canvas.  In time, their works became known as earth art or land art.  The Lightning Field by Walter De Maria is one of the best examples.  On a high plain in the mountains of New Mexico, he placed 400 stainless steel poles in a rectangular array that measures one mile by one kilometer.  The poles are 220 feet apart and are, on average, just over 20 feet tall.  Their height varies a bit to compensate for undulations of the land.  The tops of the poles create a horizontal plane.  In essence, he placed a perfect, three-dimensional grid onto a natural land form.  On occasion, it attracts an impressive display of lightning.

This work sometimes comes to mind when I’m trying to figure out how to restore natural areas on our land in the Uwharries.  There are many different ways to improve water quality, wildlife habitat and plant diversity.  Sometimes we work in harmony with nature; other times we impose our goals and objectives on the land.  The Lightning Field does both simultaneously, and so do we. 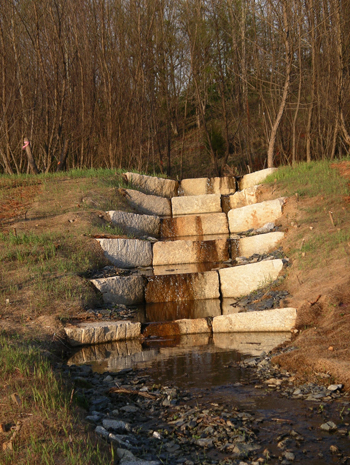 I know a botanist who advocates allowing land and weather patterns to guide our interventions.  She suggests establishing longleaf in areas prone to lightning strikes where fires will naturally occur.  We have that situation on a mountain in the Uwharries.  Endemic longleaf pines straggle down the southwest slope, through a clearcut and into a mature hardwood forest.  We’re managing the land as if it were already a longleaf forest.  We burn the cut-over area every year or two, and we open up the forest canopy by killing selected hardwoods.  New seedlings are popping up and thriving, as are fire-tolerant wildflowers, grasses and shrubs. We’ve resisted the option of planting Piedmont longleaf to supplement what’s there.  We’re going to treat the land right and let the longleaf forest restore itself.

Other times, we take advantage of cost-share programs and allow them to dictate what happens on a given tract of land.  Farther down the mountain, another clear-cut area had no evidence of naturally-occurring longleaf, so we decided to plant some Piedmont longleaf on a portion of it.  First, we had to figure out where to put the seedlings.  I studied the site and tried to imagine where the longleaf might be inclined to grow.  Knowing they prefer the uplands, I pictured them scattered along a series of rocky knolls.  At the same time, I had to bear in mind we’d need to burn them every other year.  It was going to be difficult to carve those knolls into workable burn compartments.  I compromised my vision for the sake of practicality.  We lumped the seedlings together, using the 10x10 spacing of a typical loblolly pine plantation.  It’s all a bit artificial, but it still helps restore the longleaf ecosystem.

I had a similar experience with our stream restoration project through the Ecosystem Enhancement Program.  To improve water quality, the plan proposed breaching a dam and re-directing the water toward the Uwharrie River.  I imagined something replicating a natural stream – a meandering channel chocked with smooth river rocks.  Instead, they installed blocky boulders and crushed slate gravel and created a linear series of pools and cascades – a structure engineered by man to do the work of nature (click to see a photo journal of the stream restoration project). 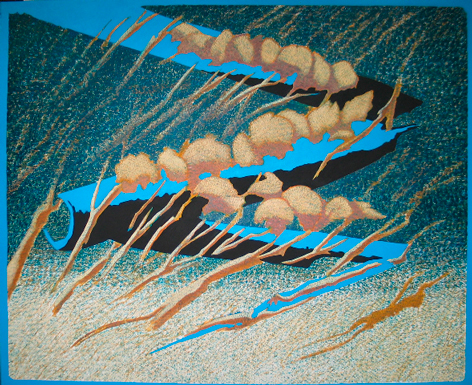 A friend who’s an artist, Jan Beekman, saw the completed project recently.  He’s best known in this country for a painting of Nelson Mandela that hangs in the United Nations, but most of his paintings are modern interpretations of landscapes.  I was curious to hear his reaction.  After contemplating the site, he told me it was beautiful.  I was initially surprised by his assessment, but as he shared his thoughts, he made a wise observation – man has altered the earth so much, our efforts to heal the wounds will inevitably look man-made.

Rational boulders set into a channel.  Tidy rows of longleaf pines imposed onto the contours of a hill.  These interventions can be seen as artistic reminders of our connection to the land and our stewardship of it.