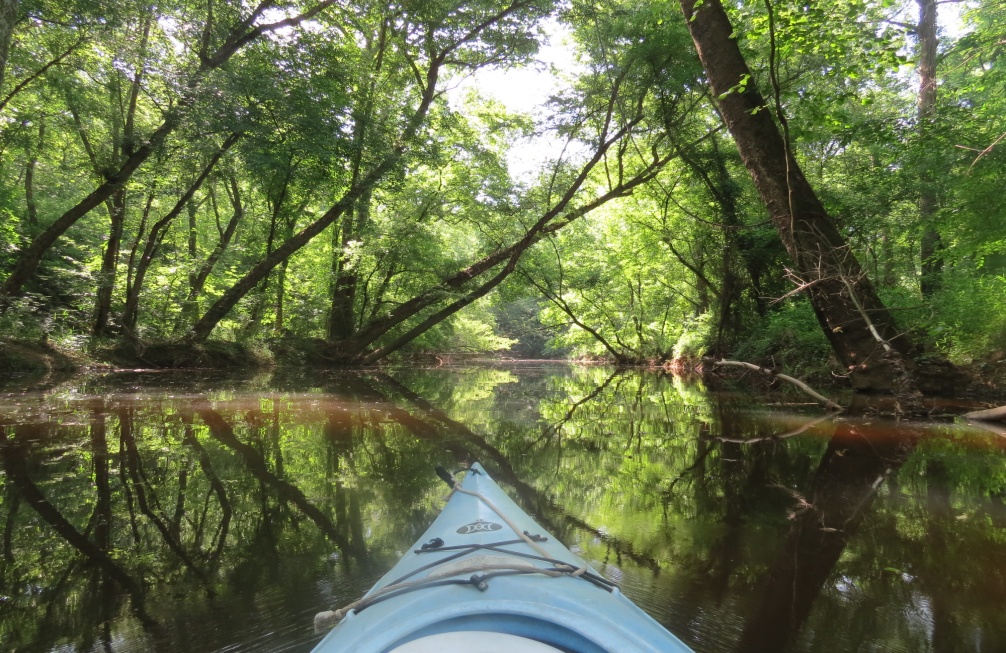 North Carolina is a beautiful state filled with unique features. The state’s majestic mountains, picturesque Piedmont farmland and tranquil beaches provide a variety of habitats and recreational opportunities. This diversity makes it a marvelous place.

With the spectacular beauty of our mountains and coast in North Carolina, the Piedmont often receives less recognition. The Uwharries are one area in the Piedmont that has abundant diversity and recreational opportunities.

With access to hiking trails, rivers, lakes and campsites this area offers many attractions. Even less well known than the Uwharries, however, is the beautiful and unique Mountain Creek.

Mountain Creek is in the southeastern Piedmont on the transition line between the Uwharries and the Sandhills. As you float on this creek, you can look to your west and see the rocky outcrops with galax and mountain laurel that are characteristic of the Uwharries. Look to your east and you can see flat terrain with willow oaks and other flora more reminiscent of the Sandhills. With this much diversity, Mountain Creek is a truly remarkable place.

Mountain Creek begins in Candor in Montgomery County and empties into the Yadkin-Pee Dee River at Blewett Falls Lake in western Richmond County. Most of the year, the waters in the creek are fairly shallow with little movement, making it a serene place to hear birds, insects, and other wildlife.

There is a wide variety of native animal species that are supported along the river corridor. A natural heritage inventory for the county identifies diverse aquatic fauna: six mussel species (two of which are listed as rare), four aquatic snails, one crayfish, and twelve fishes. Not to mention the numerous species found near the river such as deer, turkey, squirrels and many waterfowl. Some folks have even spotted black bears in the area.

You can put in on Mountain Creek at an N.C. Wildlife Resources Commission access area found on Grassy Island Road south of the town of Ellerbe (see inset map above). The creek has many tributaries and branches, and near where the creek meets the Pee Dee River a huge marsh branches off to the right. The scene looks like something found on the coast of North Carolina. As you float further and further down between the cattails, you can hear wood ducks calling to their young and the sounds of bullfrogs hiding in the tall grass. You feel as though you have floated into another world and you forget you are still in Piedmont region.

The entire journey down Mountain Creek is enchanting. As you make your way to the Pee Dee River, the creek widens and the rolling hills, hardwoods and mountain laurel begin to look similar to the Uwharries. Pay close attention to where you have come from and where you are going, as it is possible to get turned around in some of the tributaries and coves in this area.

Jessica Maynor wrote this article while interning for the LandTrust for Centeral North Carolina in 2014. At the time she was a student at N.C. State University.