A remarkable spring of hope 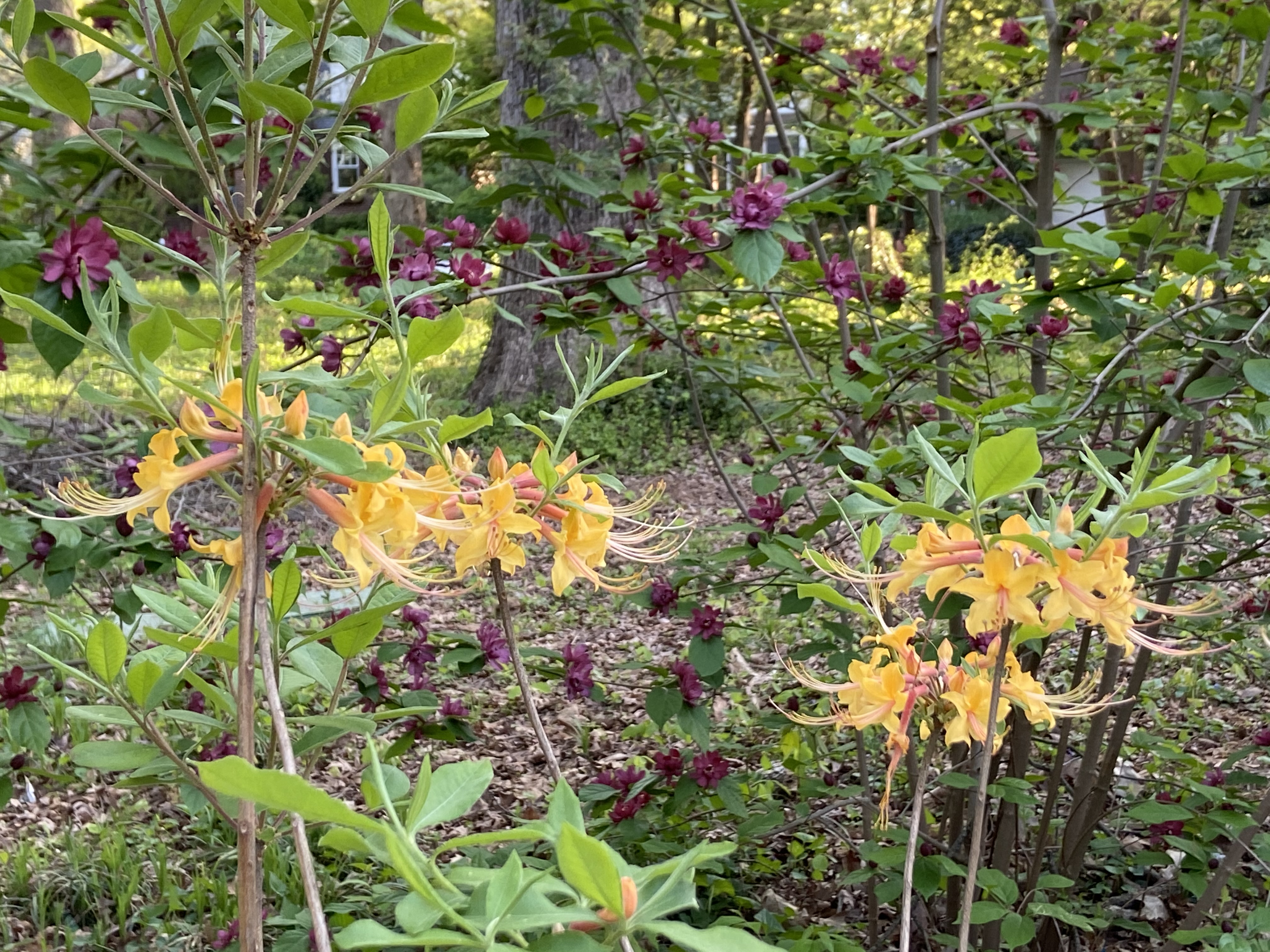 What an amazing spring!  I’ve heard that sentiment from so many people. When a Facebook friend posted a video of the glorious purple and lilac azaleas across from the post office in Mt. Gilead, scores of people responded. I always enjoy the progression of wildflowers in forests of the Uwharries and in my own backyard, but this year has seemed extra special.

In the Uwharries, the wildflowers have flouted physical distancing. The bottomland forest has reveled in its diversity, the species crowded cheek by jowl. Cold, wet weather delayed the trout lilies and hepatica. They often start in February, but this year they waited until March and then stuck around for weeks, welcoming the spring beauties, toadshade trillium and bloodroot. There’s generally a quiet pause before the final hurrah of showy ephemerals in late April, but a sudden warm spell prompted some of them – foamflower, geranium, larkspur and phlox – to start well ahead of schedule. It was as if the wildflowers were also yearning to gather again.

In Charlotte, I’ve been obsessed with the Florida flame azaleas (Rhododendron austrinum) I planted five years ago in my backyard and neighborhood park. They’re finally maturing enough to create a magnificent display. The funnel-shaped flowers are a lemony orange with varying degrees of deep rose at the base. The petals splay open, slightly recurved, to reveal colorful stamens, long and curled like false eyelashes. The ubiquitous evergreen azaleas seem frumpy in comparison. As if that weren’t enough, they emit an enchanting scent, a mildly spicy fragrance that reads as fresh and clean, the essence of spring.

It might seem like gilding the lily, but their stunning effect can be further enhanced when they’re combined with other native shrubs. In their golden glow, even less assuming plants become glamorous. In my yard, they’re paired with ninebark ‘Coppertina’ (Physocarpus opulifolius) whose emerging leaves display a range of citrusy hues that echo the flame azaleas’ flowers. Behind them, there are pops of yellow from a tangle of Carolina jessamine. The overall effect is greater than the sum of its parts.

In my neighborhood park, we planted them next to ‘Aphrodite,’ a statuesque cultivar of Carolina allspice (Calycanthus floridus). I’ve previously been somewhat lukewarm about this cultivar. With its sprawling, rosy flowers, it struck me as overly showy – bred to be crowd-pleaser. It lacks the enigmatic edge of the straight species’ duller, spidery blooms and distinctive fruity scent. 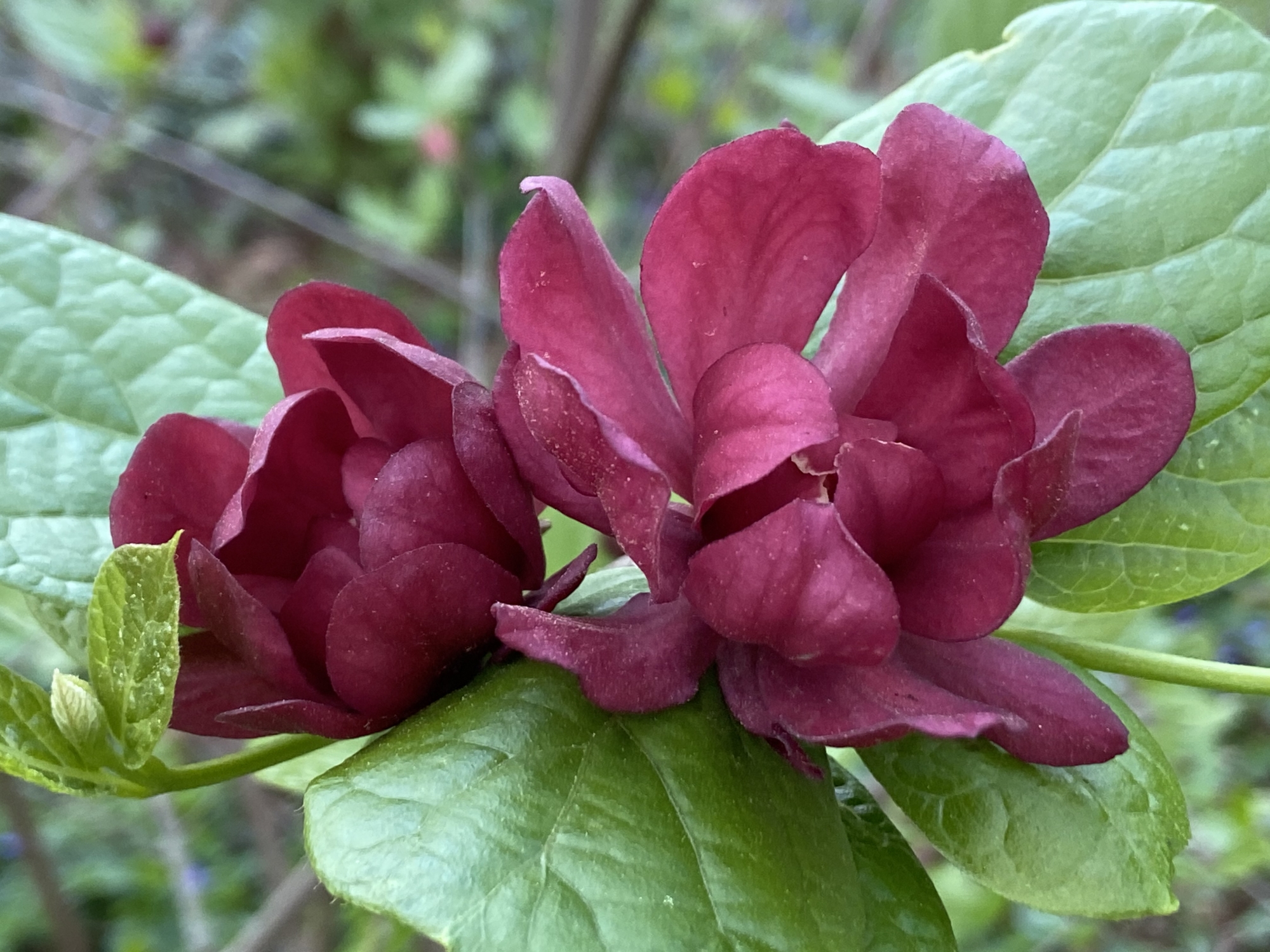 ‘Aphrodite’ started blooming first. As the azalea kicked in, I slowly became aware of the magic that was happening. Their colors and forms somehow offered both energetic contrast and calming harmony. I’d stand there before them, day after day, wondering why I’d never noticed this jaw-dropping combination before. Maybe the shrubs were simply too small in previous years?  Maybe the weather conditions allowed their blooms to coincide this time?  I got an equal amount of pleasure from watching other park-goes stop to admire them. One woman lifted a toddler so she could get a closer look.

This time last year, when Covid disrupted our lives and sent us into lockdown, we had no choice but to slow down and notice. Now we find ourselves in a liminal state, somewhere between restriction and freedom. Other diversions are creeping back into our lives, but many of us are apparently still taking time to appreciate nature. After the sameness of winter – months of drudgery and rain – perhaps every little transformation grabs our attention. Perhaps we’re grateful to be alive and able to witness this rebirth. It feels like hope, the emotion most associated with spring itself.