Robots delivering coffee, drones with pills, self-driving shuttles: Is the future here yet? 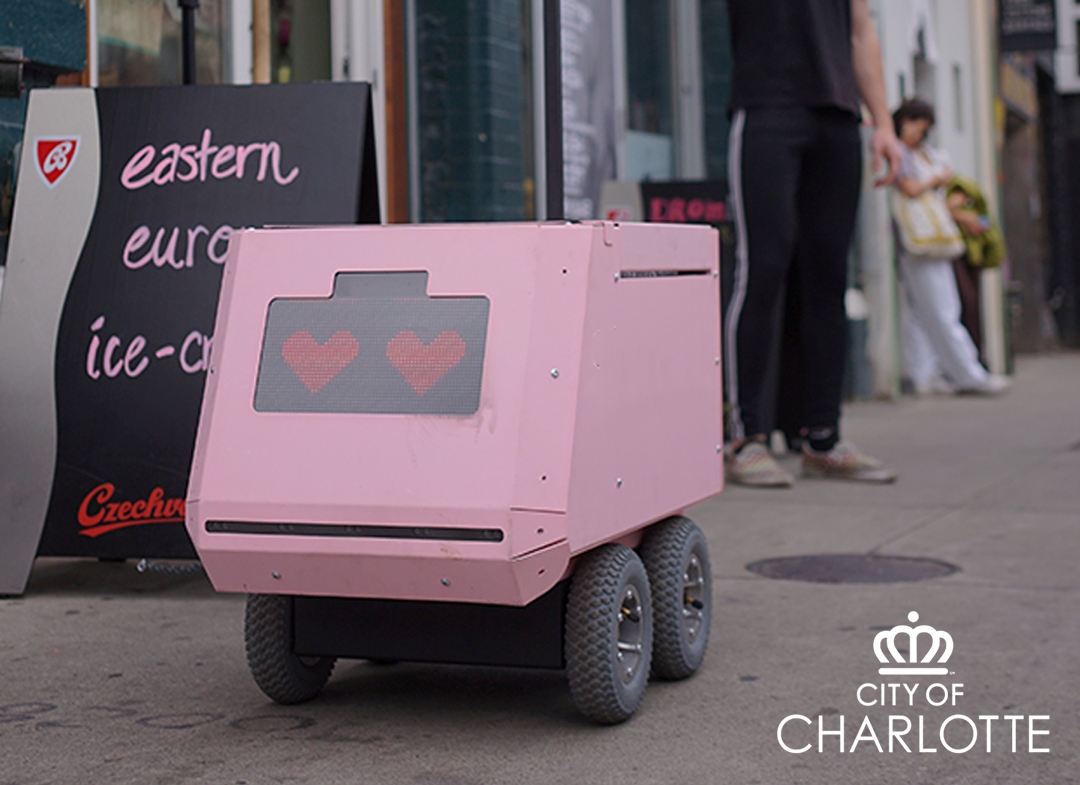 The future of transportation has arrived in Charlotte — but the future comes with a few asterisks.

This year has already seen a slew of announcements about futuristic transportation options in the Charlotte region (to say nothing of a new robot security guard uptown and bots writing local media stories). It feels like we’re nearing some kind of tipping point, where the Jetsons-era future we’ve been promised for decades starts to become reality.

While headline-grabbing, each of these pilot programs illustrates both the big potential for technology and its current limitations, as well as the hurdles facing those trying to disrupt the status quo in transportation. The path towards tomorrow is often torturously slow and winding — but it’s a future that’s tantalizingly close.

Davidson Mayor Rusty Knox is a firm believer in autonomous vehicles. That's why he's been pushing to bring them to his town for more than two years.

“That technology is on the threshold of everyone being able to use it,” said Knox. Davidson is working with Davidson College, the Charlotte Area Transit System and the N.C. Department of Transportation on bringing an autonomous shuttle to run between downtown Davidson, CATS’ express bus stop and the college’s campus.

“We definitely want the technology, and we want the pilot program to get off the ground,” said Knox.

That pilot program would start small, with one vehicle on one route. Making the approximately 1-mile trip would be CASSI, an autonomous shuttle that’s previously been tested at the Wright Brothers National Memorial and N.C. State University.

The electric shuttle carries up to five passengers, goes between 8 and 12 mph, navigates and drives itself using an array of sensors, and comes with a human "customer service operator" to greet people, make them feel comfortable and take control of the shuttle in emergencies.

In the case of Davidson, the autonomous shuttle will have to navigate city roads, traffic signals and unpredictable pedestrians, bicycle riders and even scooters. 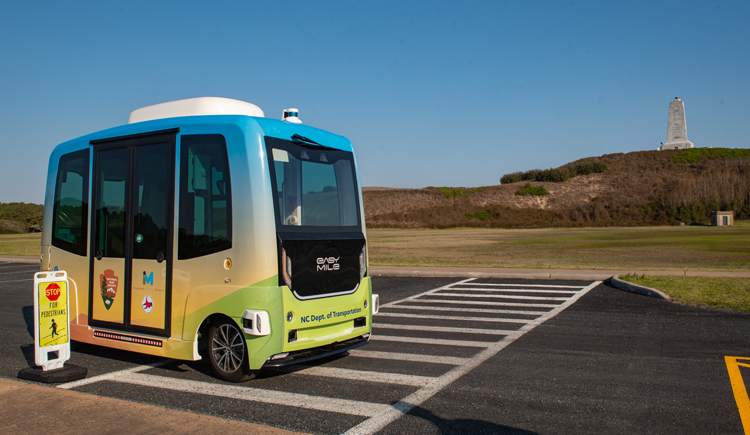 “Part of the difficulty of an urban route, or any well trafficked route, is that the vehicle may need to make a series of stops and starts as it detects pedestrians or other objects in its way. Traffic lights can also complicate the vehicle's routing,” said NCDOT spokesperson Harris Kay. The pilots thus far haven’t included traffic signals, and the exact route of a Davidson shuttle is still under discussion.

A driverless shuttle is likely an especially appealing idea now, as transit agencies grapple with a labor shortage and difficulty hiring drivers. There’s no timeline for when the pilot will launch.

Zipline’s autonomous drones can navigate themselves to and from parachute delivery drops, but not in the Charlotte region until the FAA gives the go-ahead. The group charged with administering America’s airspace  — including the airspace around Charlotte Douglas International, one of the busiest airports in the U.S. — requires drone cargo operators to apply for and receive a “Part 135” commercial operator license.

Zipline has already run a pilot program in North Carolina with Novant Health to deliver personal protective equipment to healthcare workers at the start of COVID, and operates in other locations, such as Walmart’s headquarters city of Bentonville, Ark., but the company needs a new license for its Kannapolis-based prescription-delivery service. An FAA spokesperson said the agency doesn’t comment on ongoing certifications, so there’s no timetable for when they might approve Zipline. 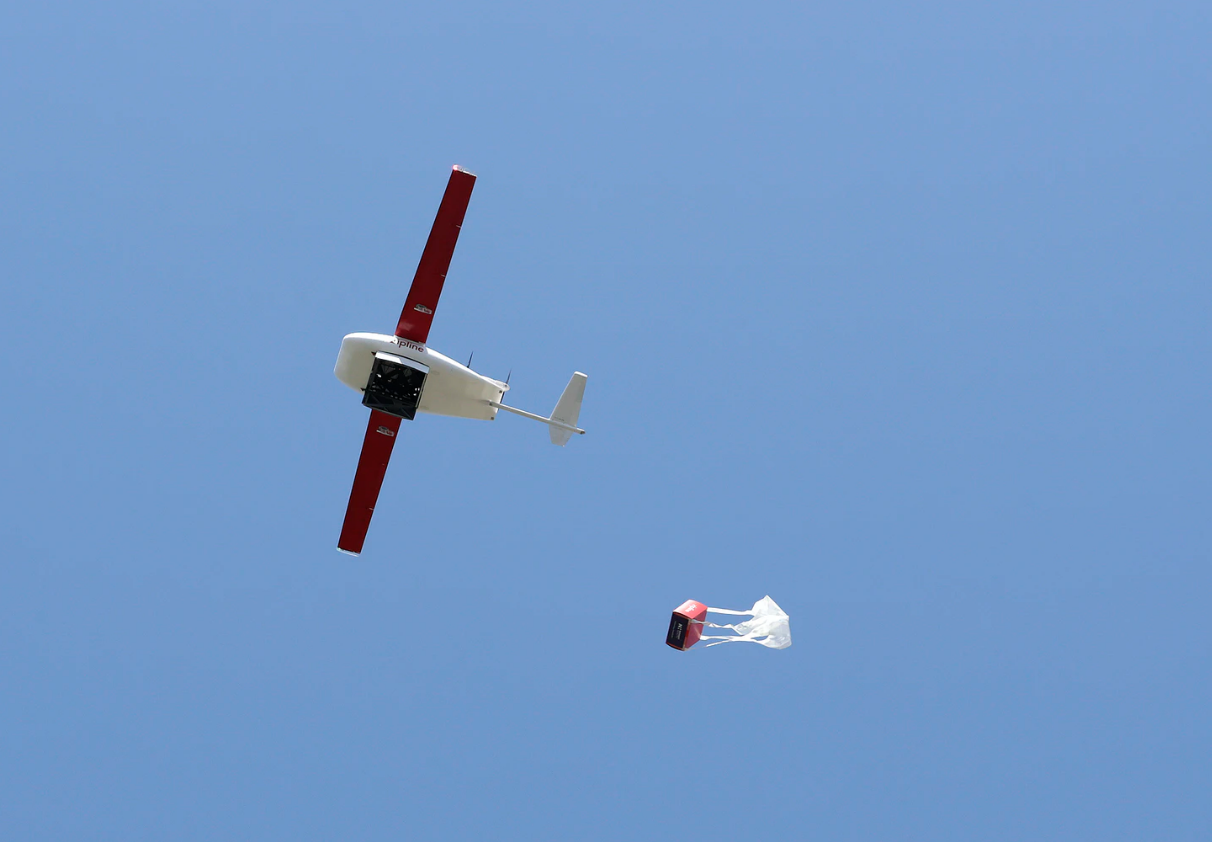 A Zipline drone in action. Courtesy Zipline/City of Kannapolis

Okeoma Moronu, Zipline's Head of Aviation Regulatory and Legal Affairs, said the company is in the “final stages” of the FAA regulatory process. The company plans to offer direct home delivery for prescription medications in partnership with Magellan Rx Management, and to supply stores with “select pharmacy products” for on-demand restocking.

“As soon as businesses and customers have a chance to test out Zipline’s service, it actually becomes routine very quickly,” said Moronu. The company says it can complete most of its deliveries in 15-30 minutes, depending on distance from the warehouse and flight facility, parachuting goods down to the recipient’s house from an autonomous aircraft.

Zipline’s drones cruise at about 60 mph, around 300-400 feet above the ground. According to FAA documents, Zipline anticipates operating about 20 flights per day from a launch center at the Stewart-Haas Racing campus on Kannapolis Parkway. The delivery zone would cover a 1,038 square-mile swath north of Charlotte, from Huntersville to Troutman.

But don’t expect a future where your whole grocery list — or even a whole chicken — is delivered by drone right away. The aircraft, which are 10 feet wide and 6 feet long, carry up to four pounds each, so drone delivery currently makes the most sense for high-cost, lightweight products like medicines. (To see Zipline in action near Walmart’s headquarters in northwest Arkansas, click here.)

Tiny Mile delivery is available within a 1-mile radius of Undercurrent, covering neighborhoods like Plaza Midwood, Chantilly and Belmont. For now, robot delivery ordering is only open to people who pre-enrolled in the pilot program (as I discovered when I tried to order a cup of coffee from a few blocks away this week).

The battery-powered robots, reminiscent of something from Star Wars, travel at roughly walking speed. Sharif Virani, Tiny Mile’s head of growth, said the company hopes to expand its Charlotte service to other retailers in different parts of town after the two-month pilot wraps up. And Tiny Mile is also testing larger and faster versions of Geoffrey for future iterations of its delivery service.

Tiny Mile has faced challenges on its home turf. In December, the company pulled its robots off Toronto streets, in advance of a vote by Toronto leaders banning autonomous and remote-controlled delivery robots. Toronto City Council members said they were responding to concerns from disabled residents about the robots making it hard for them to get around. Toronto and the regional government are still considering a pilot program that could bring the robots back.

“We’re learning better ways to work with cities,” said Virani — one reason getting Charlotte leaders on board for the rollout was key.

Virani said human-operated delivery robots get around some of the hesitancy leaders in different cities might have about unleashing fully autonomous delivery robots. He said the robots are operated with game console-like controllers.

Todd Huber, owner of Undercurrent, said the test program has been successful so far. Still, there are limitations. Loading the robots requires staff to leave the store, which can add to baristas’ workloads during busy times. Undercurrent is currently using robot delivery only during weekdays, avoiding peak times on Saturday and Sunday.

But Huber said many of his early concerns haven’t come to pass.

“One of the things I was worried about initially was will the drinks be fresh, will they spill, will the iced drinks melt, will the hot drinks be hot,” he said. “Everything seems good.”

“Our net income margin in a good year is probably 15%,” said Huber. “If we did all Doordash, we’d lose money.”

Though Tiny Mile can’t deliver long distances, Huber pointed to the environmental benefits of using a rechargeable electric robot instead of a gas-powered car to deliver coffee and pastries. He said that it appears many people ordering via Tiny Mile are new customers, not just existing customers skipping a trip to the shop.

There are still hiccups — Fox 46 recently reported on a Geoffrey robot tipping over a curb — but Virani said it’s important to get a new product into the real world rather than wait until every detail is perfected.

“That's not what you get into the startup game for,” said Virani.

So, how close are we to routine drone-dropped prescriptions, robot-delivered cappucinos, and self-driven buses shuttling us around routinely? The future can feel like it’s always receding into, well, the future. Amazon announced autonomous drone delivery was coming in 2013; a story this month detailed the service’s ongoing struggles to get off the ground.

Still, there’s nothing more treacherous than looking at the state of technology today and pooh-poohing the potential for dazzling advances. Anyone who judged the future of automobiles by Henry Ford’s first prototype or laughed at the Wright brothers’ flimsy canvas-and-wood flying machine looked pretty silly just a few years later. And if you told most people in 2008 that they’d soon get into a stranger’s private car they summoned via smartphone, they’d probably think you were nuts.

Drone and robot delivery are already a reality in other places. Companies like Starship are operating autonomous delivery robots in cities from Washington, D.C. to Modesto, Ca. You can get a burrito dropped to you from a drone in Raeford, N.C. (though, as this account points out, if you don’t have a backyard within a nautical mile of the launch zone, you’ll have to drive to a designated drop point like a Walmart parking lot). And self-driving cars are becoming more and more a part of our everyday lives, despite exhaustive coverage of every crash or mishap.

Still, it’s good to keep in mind that leaps forward are often more incremental than supersonic. In addition to ogling the future’s promise, we need to figure out how we’re going to handle the problems we face today, from growing congestion and collapsing bus ridership to crowded Chick-fil-A drive-thrus that spill into the street. Maybe those solutions will involve pink robots, or maybe they’ll involve paying bus drivers more and changing zoning rules. Or both.

Either way, the future is ours to shape.

This story also appeared in Transit Time, a joint newsletter produced by the Charlotte Ledger, WFAE and the UNC Charlotte Urban Institute.