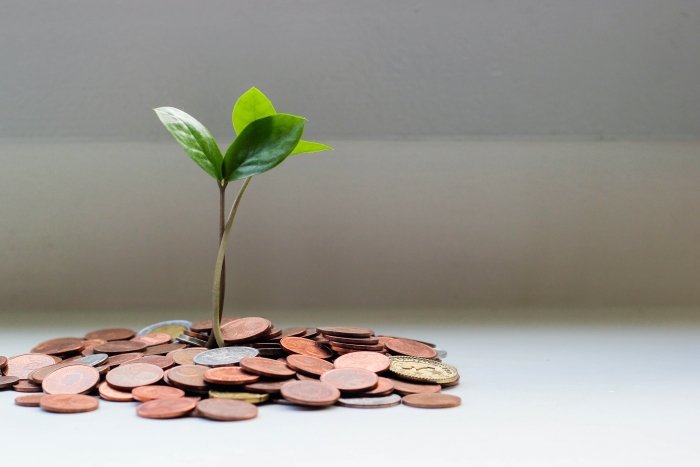 This is the sixth article in an ongoing series, based on a report by the Urban Institute. The report was compiled with support from Bank of America, ​which partners with the UNC Charlotte Urban Institute and the Institute for Social Capital on research that provides insight into community initiatives. Join us Wednesday at 7:30 p.m. on Twitter for a discussion, using the hashtag #WealthGapWednesdays to follow along and ask questions.

Savings are both a reflection of current wealth and a predictor of future wealth.

Wealth serves as a buffer through economic downturns, job loss, and other unexpected emergencies such the COVID-19 pandemic. In Charlotte, households of color are more than twice as likely to lack sufficient savings or assets that can be used to pay for basic needs for three months without income when compared to White households.

The result: almost half of all Latinx and 44% of Black households wouldn’t be able to cover basic needs after three months.

This is especially troubling, given unemployment rates in Charlotte-Mecklenburg and throughout the nation as a result of the pandemic. Personal savings are crucial in times like these, helping families pay for rent, mortgages, and utilities, as well as provide food, medicine and other necessities.

People’s early experiences with saving often include a savings account at a local bank branch. Financial institutions offer the infrastructure to house, protect, and grow savings and other assets. 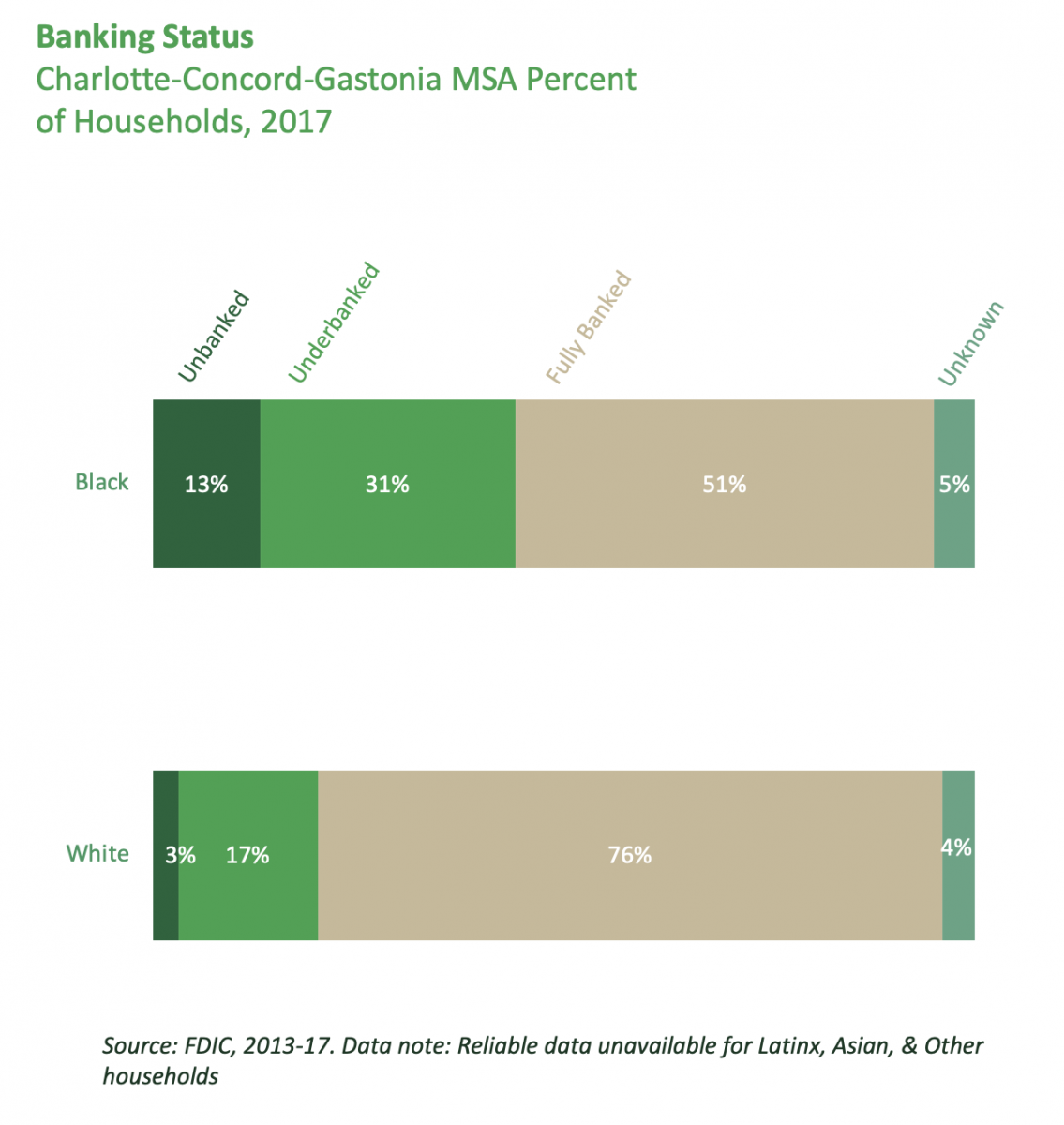 We recognize that addressing the racial wealth gap is dependent on systemic and structural solutions rather than the individual solutions that have placed the weight of societal change on the survivors of racial inequity.  The UNC Charlotte Urban Institute will continue work like the Racial Wealth Gap series with the guidance of our community and we commit to examine our role in the problem of racial inequity and our contribution to solutions.

Families remain unbanked or underbanked for many reasons, including distrust of banking institutions due to their history of redlining and predatory lending practices. The foreclosure crisis that led to the Great Recession in 2008 likely added to this distrust. Neighborhoods of color were targeted for more expensive loan products and higher interest rates, which led to higher foreclosure rates in Non-White neighborhoods than White neighborhoods.

These systemic failures in the banking system can help explain gaps in savings. Savings is an individual and structural behavior. The role of individual saving behavior is frequently regarded as both the problem and solution for wealth and income inequality. While individual savings are important, the role of structures that support or limit savings must be more extensively examined and addressed.

This systemic role can also be seen in retirement, another form of savings. Retirement savings are typically held in investments such as stocks, bonds and mutual funds, which grow over time.

In the U.S., a higher percent of White and Asian households have retirement savings compared to Black and Latinx households, on average. 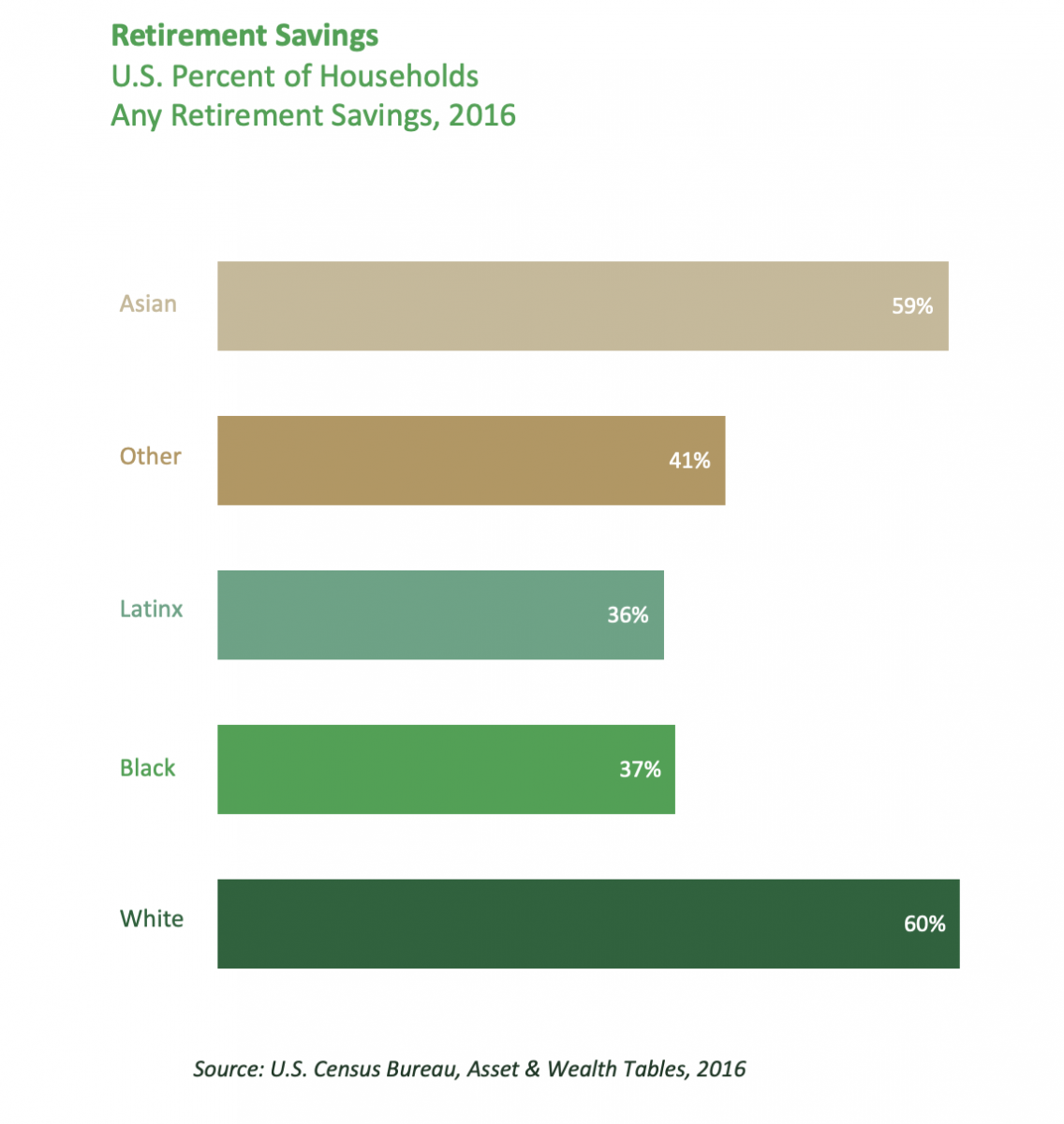 Retirement savings are often facilitated by employer-sponsored programs that mandate employee contributions, as well match their employees’ contributions. However, employer-sponsored retirement savings are not available or accessible in all jobs, particularly in lower hour and lower paid jobs disproportionately held by Black and Latinx workers, including the food service industry, domestic, and farm labor.

These differences cannot be explained by savings behavior alone. Comparisons across different groups sometimes cannot account for the persistent racial and ethnic gaps in wealth and income. When controlling for income (comparing those at similar income levels), Black families have similar, if not slightly higher, rates of savings as White families.

Retirement investment can also be managed directly by individuals — but this requires significant access to financial knowledge and tools.

Families with higher levels of wealth typically have the ability to pass some of that wealth on to their children or grandchildren through an inheritance and/or through financial assistance with higher education, a down payment for a home, or capital to start a business. Intergenerational wealth puts those children in a better position to acquire their own assets and build wealth to then pass on to their children.

The difference is stark: Based on national data from 1995 to 2016 from the Federal Reserve Board Survey of Consumer Finances (SCF), 88% of individuals who received an inheritance or living trusts transfers were White. 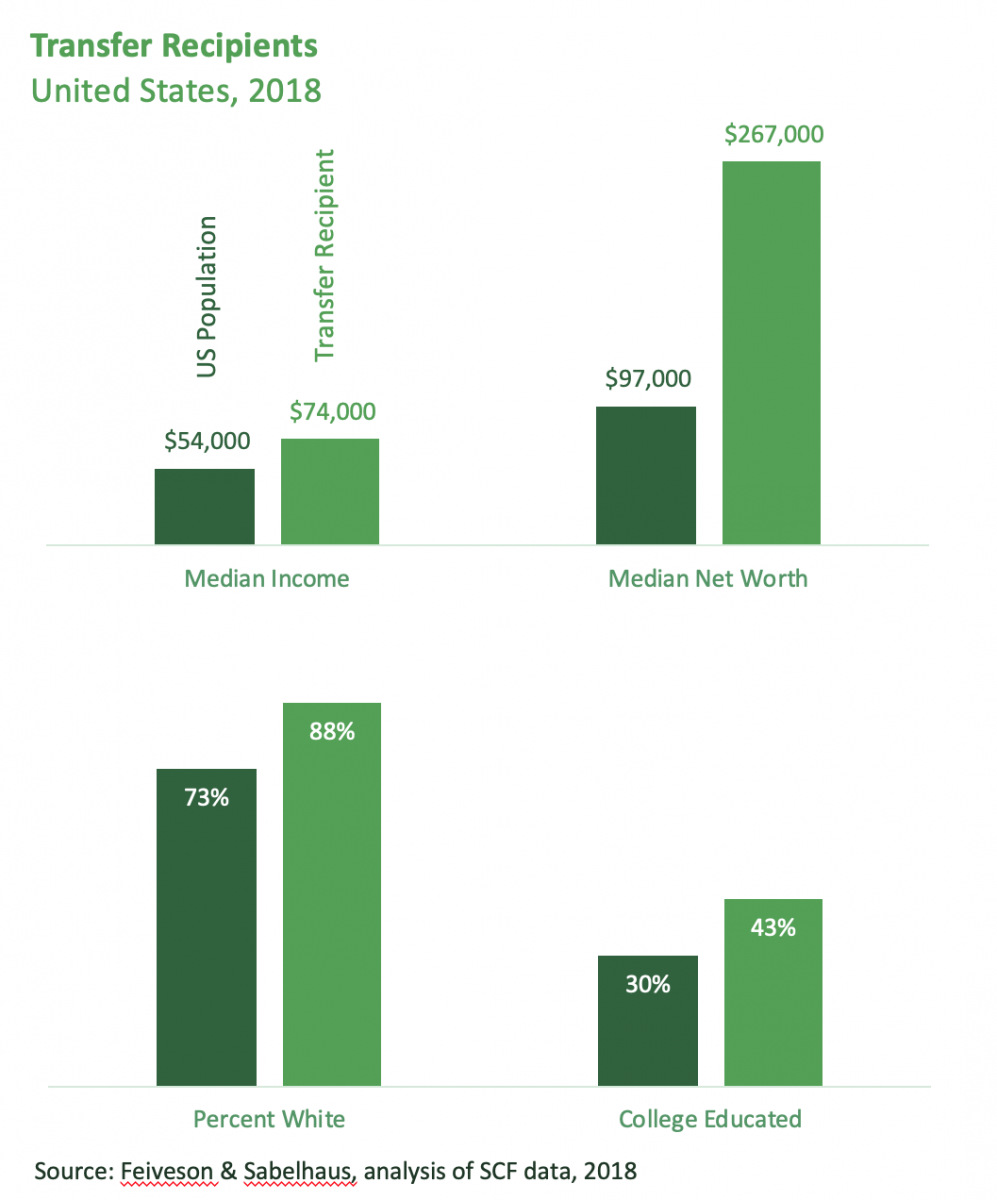 This means that Black and Latinx households are being called on more often to use their resources to support a family member, potentially limiting the ability to build their own wealth.

The COVID-19 pandemic has hurt employment and wages for many families living in the Charlotte-Mecklenburg region, leaving many without income or with reduced income. The solutions outlined below include policy changes and evidence-informed practices that bridge racial and ethnic gaps in savings, investments and intergenerational transfers, all of which are components of the racial wealth gap.

Reparations: Economically redress the loss of generational wealth from the free labor of slavery and subsequent policies and practices that have resulted in the loss of life, property, income, businesses, savings, and other assets.

Universal Retirement Accounts (URA): Federally regulated retirement plans that provide a savings infrastructure for all workers. Workers would be automatically enrolled with an option to opt-out and could also provide a matching component.

Postal Banking: To address the financial services needs of the unbanked or underbanked, the United States Postal Service could offer an array of basic banking services, including access to small loans at affordable rates.