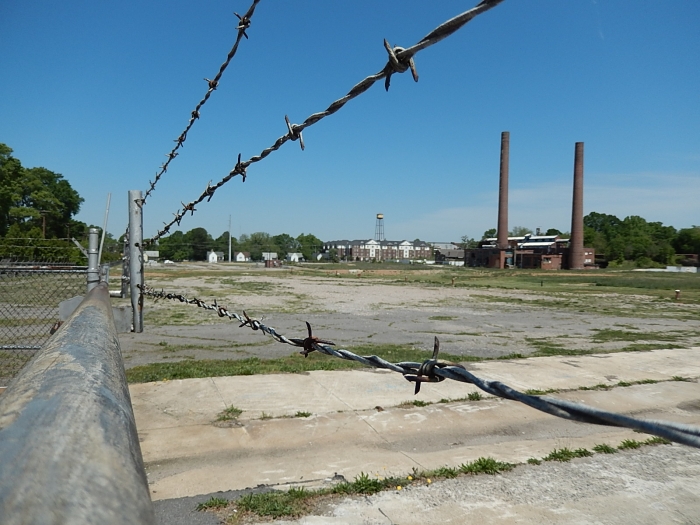 Mae Jones looks out her front door every day at the empty, massive Loray Mill, about a mile from downtown Gastonia, and remembers the rumble of machines, the acrid odors and her hard work there for 35 years.  Once, it was the lifeline of the surrounding  mill village, and Jones, 93, is thrilled by efforts to bring it back.

More than a decade after preservationists began campaigning to save Loray, a redevelopment project is underway that supporters hope will transform the slow-growing west side of Gastonia. Loray was once one of the largest textile mills under one roof in the South, and it was a flashpoint for statewide opposition to unions in the early 20th century. Its renovation will be the largest redevelopment project in Gastonia’s history.

“It’s like, pinch me, please. I’m not sure I’m really awake,” said Lucy Penegar, a member of the Gaston County city historic preservation commission*  and former board member of the nonprofit Preservation North Carolina. Penegar sometimes mowed the lawn at the 110-year-old, 600,000-square-foot vacant mill so it wouldn’t become a neighborhood eyesore, and has worked tirelessly for its renovation.

About 30 miles southeast, officials in Rock Hill, S.C., also have joined the growing movement to  revitalize old mills for economic development and historic preservation. While at least half of Gastonia’s textile mills have been demolished and Loray Mill is the first one the city has promoted for redevelopment, in Rock Hill officials are studying what to do with the city’s remaining mills. Rock Hill’s ambitious 20-year redevelopment effort has grown to include plans to turn the site of a former downtown textile finishing plant into a hub for technology jobs.

At least a half dozen smokestacks rise across Rock Hill’s center city from sites of textile mills that have primarily been redeveloped into offices and housing. City officials, after receiving bids from 10 developers, recently began the process of selecting one to oversee Knowledge Park, a proposed one-square-mile downtown development that will include high tech jobs, retail space and an expansion of 6,200-student Winthrop University.

“We learned the hard way that vacant textile mill sites are major problems for a community,” said Rock Hill economic development director Stephen Turner, pointing out that many of the old mills had been stripped of valuable materials and abandoned or damaged by fires. “We couldn’t sit still and do nothing about these empty mills.”

In North and South Carolina, redevelopment of textile mills has increased over the past decade as local officials have been able to offer state tax credits for properties listed on the National Register of Historic Places. In Charlotte and across the region the mills have been turned into condos and apartments, senior housing, offices, shopping complexes and restaurants. However, preservationists fear that proposed state tax law changes will mean the end of state historic preservation tax credits, a change that could stall efforts to redevelop historic buildings.

“It’s going to hurt,” said Myrick Howard, executive director of Preservation North Carolina, a nonprofit advocacy group which initiated the movement to save Loray Mill and eventually became its owner, after Firestone Tire & Rubber donated the property in 1998. “If this goes through, we’ll have to figure out a new way to give incentives for this type of renovation.”

According to N.C. officials, state income tax credits for the redevelopment of National Register historic properties has led to $1.4 billion of private investment in 90 of the state’s 100 counties and created an estimated 23,000 jobs since 1998.

In Gastonia, the developer, Loray Mill Redevelopment, worked for nearly a decade to secure financing, which includes government funding and federal and state tax credits, finally pulling it together a few months ago. In its first phase, the planned $39 million complex will include 190 loft-style apartments, 80,000 square feet of commercial space and 35,000 square feet of amenities, including a rooftop garden with views of Crowder’s Mountain. Gastonia is contributing money for water and sewer improvements, sidewalks and a bicycle path and has developed an area growth plan to encourage private reinvestment in surrounding homes and businesses.

“It’s such a thrill for me to be able to redo this building,” John Gumpert, one of the partners in Loray Mill Redevelopment, said on a recent tour of the mill as he pointed to 16-foot-tall windows and exposed brick walls. Gastonia economic development official Jack Kiser predicted the complex will spark the revitalization of west Gastonia. “They have gotten the poor end of the stick, because the natural gravity of growth has been toward Charlotte,” he said.

To celebrate the sale of the mill and the pending redevelopment, Preservation North Carolina and city officials recently held a ceremony marking the installation of a plaque commemorating the 1929 Loray Mill labor strike, in which two people died, one of them the Gastonia police chief. The strike is considered one of the most important labor history events in the South.

In Rock Hill, the Printing and Finishing company, known as the Bleachery, was once the largest such plant in the world with nearly 5,000 employees bleaching and finishing fabric for cotton mills. It dominated the city’s economy for years, and under the planned redevelopment it will be the centerpiece of the downtown Knowledge Park.

“The leaders in this community have really embraced the idea that the center of the city can be the heart of the community once again,” said Turner. “This is happening because local people have made decisions to invest here.”

Rock Hill bought the textile site in 2010, after it had been badly damaged by arson. Much of the 1.3 million square feet of space was demolished, with nearly 400,000 square feet remaining for use in a proposed high tech jobs center. “We saved everything we could that hadn’t been damaged by the fire,” Turner said.

In Gastonia, officials say they are fortunate the Loray Mill has remained intact. As redevelopment gets underway, Penegar, a member of the local historic preservation commission, has been searching the building for artifacts and for stories about mill life from families in the surrounding village.

An 8,000-square-foot permanent exhibition on Loray Mill is planned for the complex. “Loray has so much history,” said Penegar. “There’s just so much to tell.”