What a 1944 call for planning can teach us today 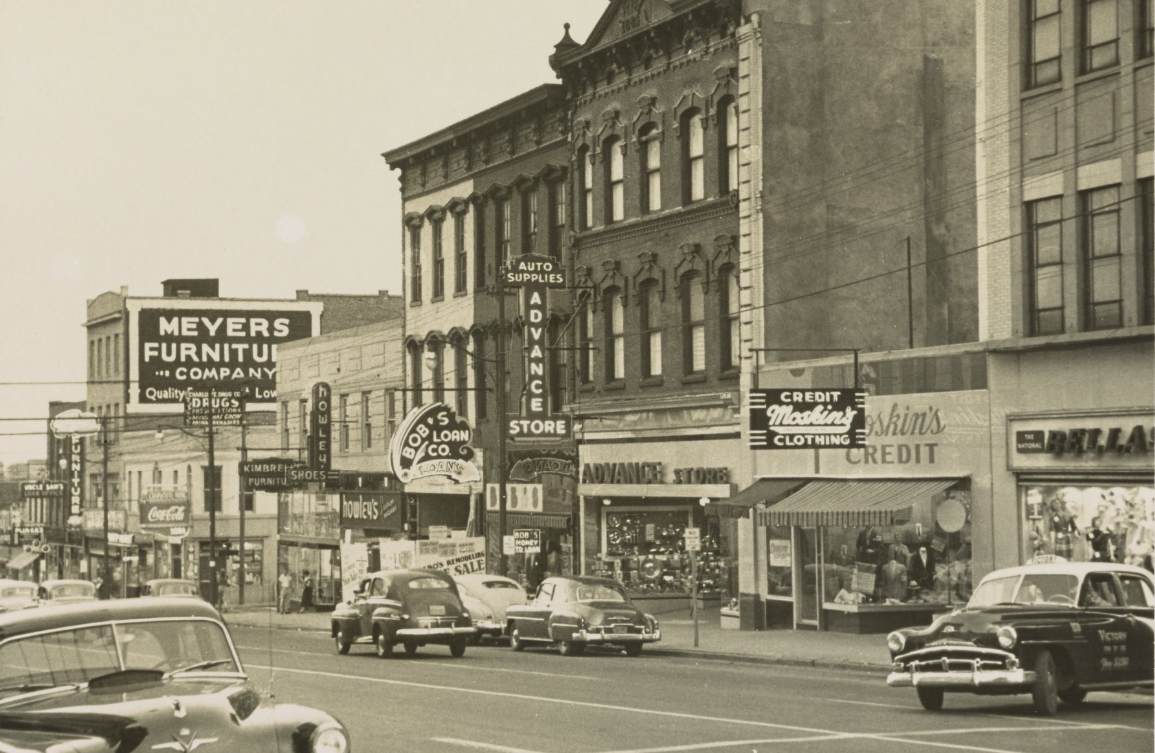 Almost eight decades ago, Charlotte had just topped 100,000 residents, World War II raged, legal segregation was the law of the land and most of Mecklenburg County was still farmland.

But despite the obvious differences from today, an urgent call in 1944 for the city to develop a plan to manage its growth still resonates in Charlotte, a city that’s long been convinced it was headed for the big-time.

“It will be an overall comprehensive framework, a large pattern – the policy, if you will, of our city and county growth,” Coleman Roberts wrote in A Pattern for Charlotte. “In the main, it should not change substantially, or if it does, very slowly…It should be a coordination of all plans and surveys that have been or may be made by our city and county.”

Commissioned by the Chamber of Commerce, the document produced by Roberts and a small committee of local leaders made the case that without a comprehensive plan for its growth, Charlotte would end up sprawling, traffic-clogged, unlivable and – worst of all – a bad place for business. 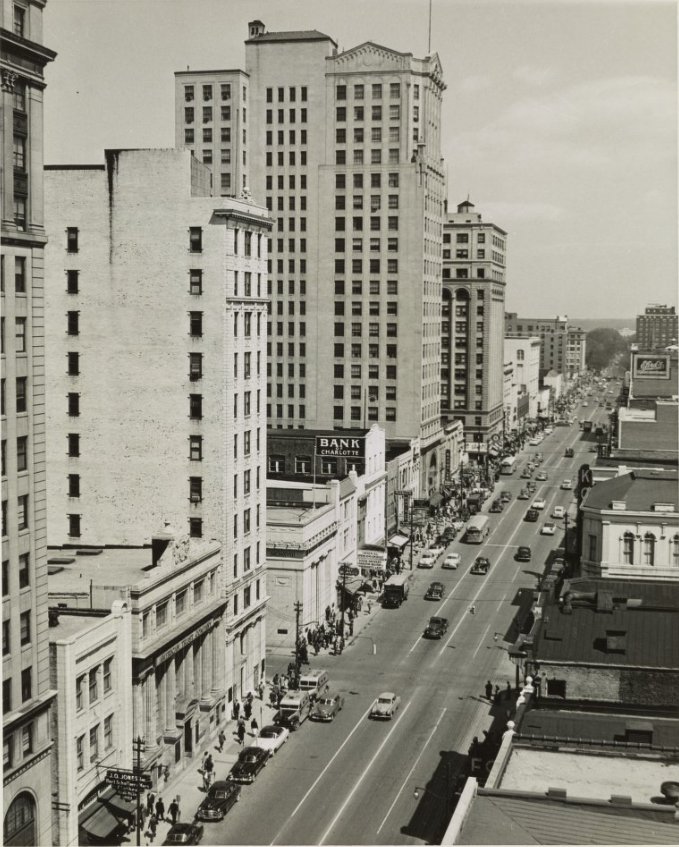 The city was in the midst of a huge growth spurt, with a population that had doubled in just 24 years. By calling for a plan, they hoped to set the course for a better future – and that call is revealing for the anxieties, prejudices and solutions they proposed.

Here’s what a look back at the 1944 call for a better plan can teach us today:

Everyone knows plans can end up sitting on shelves

It’s one of the most common things you’ll hear from planners today: We don’t want this thing sitting on a shelf.

In 1944, planners shared the same concerns.

“A Master Plan would be a beautiful thing in the City Hall and it would be a source of pride to all of us,” they wrote in A Pattern for Charlotte. “But it will be a lifeless cause if it is not publicly understood, if it is not referred to and deferred to in all matters of city and county development.”

You know the rest: Charlotte came up with plenty of plans, and some of them were quite influential, while many ended up – you guessed it – gathering dust on shelves. But that’s not in the plan for this neighborhood! is one of the most common objections that comes up at rezoning hearings. So, if this is a problem everyone knows about, and wants to avoid, why do so many of our plans end up on the proverbial shelf?

That leads to another lesson…

City Council changes every two years in Charlotte, as does the Mecklenburg County Board of Commissioners. The real estate market shifts quickly and unpredictably (No one is building condo towers uptown anymore, and who ever thought suburban golf courses and office parks would be hot properties for walkable, dense development?). And in a fast-growing, rapidly changing city like Charlotte, it can be tough to project decades out.

Some of what they foresaw came to pass (greatly expanded air service making Charlotte an air transport hub), while others were upended by larger trends (the continuing centrality of textile). Within Charlotte, annexation has increased the land area to subsume much of the county, with the city now covering 310 mostly suburban square miles, for one thing.

Which leads us to…

The conventional wisdom can be completely wrong

In 1944, everyone in power knew urban “blight” was the city’s biggest problem. The report is filled with ominous statistics about the residents of the city’s “slums,” which power brokers happened to consider Black neighborhoods like Brooklyn in Second Ward. Under “A Strong Argument for Urban Redevelopment,” the authors argue that “slum and blighted districts” account for 45% of major crimes, 55% of “disease” and 60% of “tuberculosis,” while contribution 6% of real estate tax revenue.

This was more than a decade before federally supported “urban renewal” began tearing down Charlotte’s Black neighborhoods in earnest, displacing thousands of families, locally owned businesses and communities, replacing them with highways and sterile government buildings. Such documents show the groundwork being laid to ready Charlotte for “slum removal.”

Undoing the damage wrought by discriminatory housing policies and urban renewal is one of the goals of Charlotte’s 2040 plan. Other ideas in the 1944 plan also run counter to the conventional wisdom today (more huge parking garages and expressways slicing through town, anyone?), and are also targeted for remediation in the 2040 plan. 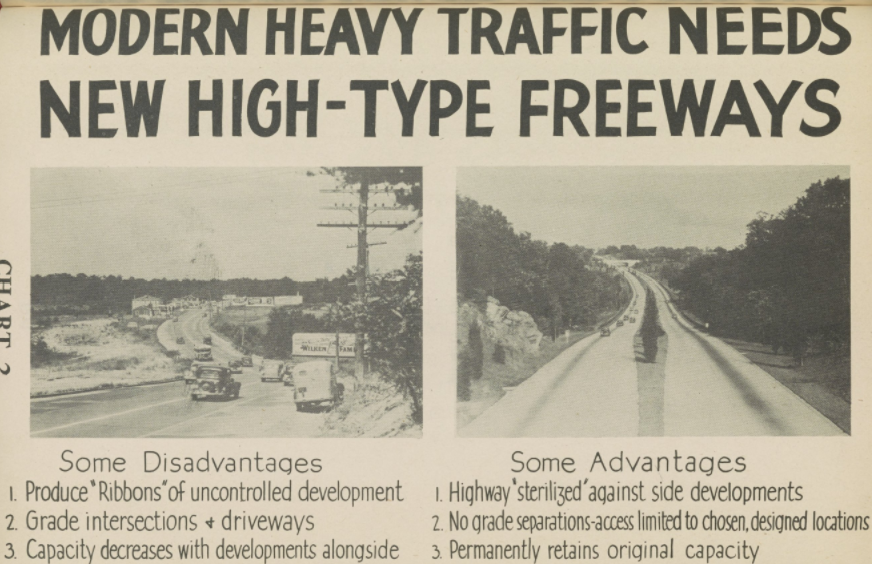 The 1944 "Pattern for Charlotte" report called for more limited-access highways throughout Charlotte.

While there’s likely to be nothing as ruinous as urban renewal embedded in our plans going forward, it’s worth pausing to think about what we're doing that might seem completely anachronistic or even harmful from the clear-eyed perch of future decades. In a work-from-home and autonomous-drone future, will we look back at transit investments and think whoops? Will we want big-lot, single-family only zoning back someday? Will decisions not to acquire more park land before development gobbles up remaining open spaces look foolish?

Maybe the biggest lesson from past planning efforts is the most obvious one: Laying out what something as dynamic and unpredictable as an entire city will look like decades in the future is hard, so plans need to be flexible and updated regularly to stay relevant.

As the 1944 call for a plan put it: “Let us profit by mistakes of our own and other cities and put a stop to [a] piecemeal approach to our problems…In all our planning, we want to think first of A BETTER CITY and second of A BIGGER CITY.”