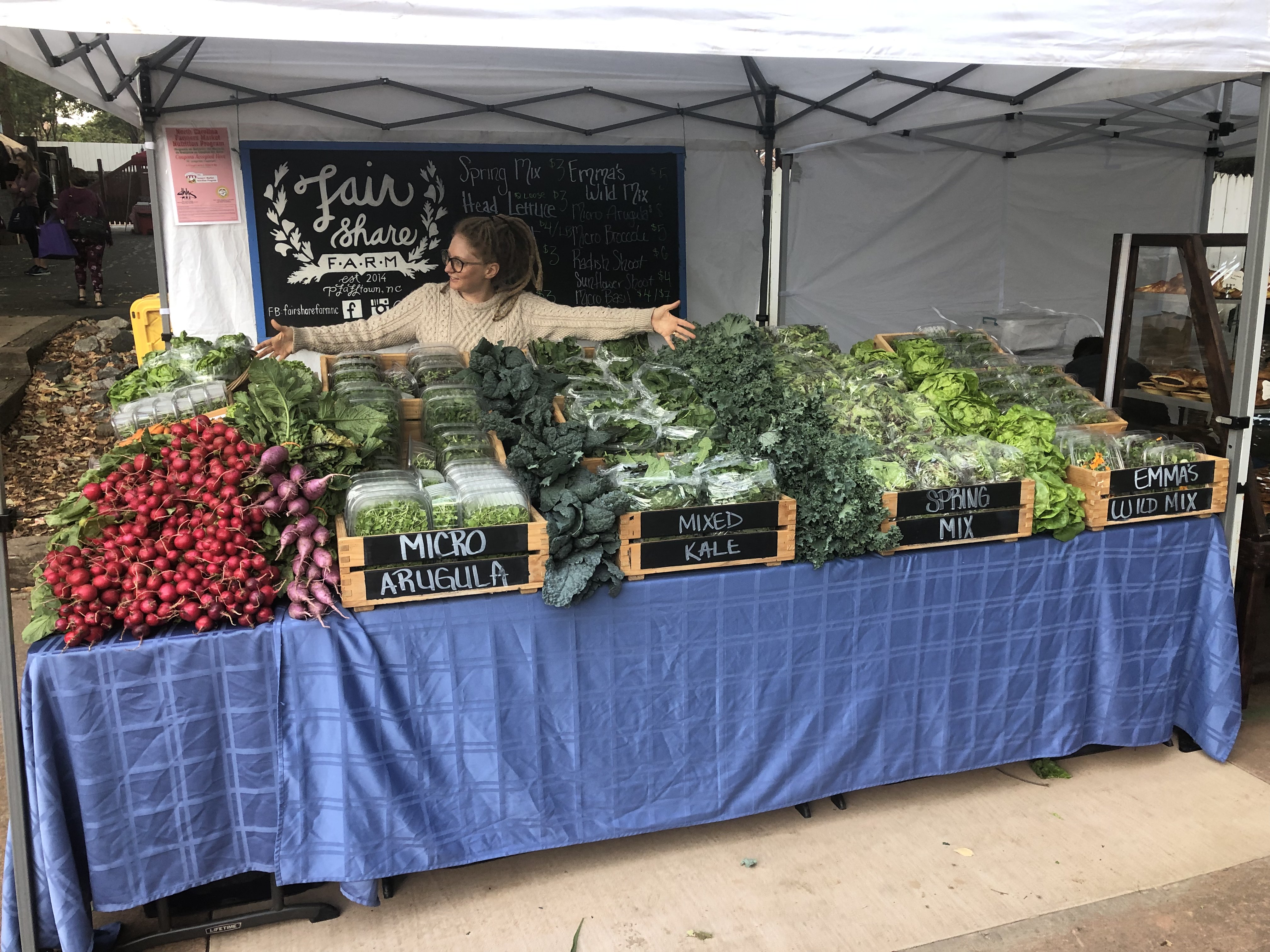 It’s Monday, and farmer Isaac Oliver begins his week at the computer.

Out on their 72-acre Harmony Ridge Farms in Tobaccoville, Isaac and dad Kevin raise ducks, harvest eggs and grow produce. At the start of each week, Isaac emails his list of available products to nearly 70 restaurants in Charlotte, Winston-Salem, Greensboro, Raleigh and Durham. Over the next few days, chefs text or email him what they want.

“A restaurant in Charlotte orders 20 ducks every week and a lot of our eggs are on standing order, but otherwise, it’s week-to-week,” Isaac said.

The farm-to-table movement is thriving between big North Carolina cities and outlying rural towns. More and more restaurants are serving local food, while more and more small farms are popping up to supply them. Supporters say it’s healthy for body and land.

And yet, in many ways the economic links can still feel uncertain. Both sides of the equation are operating on thin margins and intense competition from “Big Food.” In a world that often values cheapness and convenience above all, farm-to-table is growing but faces an uncertain future.

“You’ve seen an uptick in farm-to-table, but it’s hard to see it as sustainable,” said Kris Reid, executive director of the Belmont-based Piedmont Culinary Guild, a collective of chefs, farmers and other food artisans. “We need to get broad audiences on board or we will slowly lose farms to development and big conglomerates.”

The farm-to-table relationship usually begins with the farm seeking out restaurants and farmers markets. In addition to being skilled at working the land, today’s farmer must also be equal parts salesperson, administrative clerk and delivery driver.

Emma Hendel and her husband Elliot Seldner run Fair Share Farm in Pfafftown near Winston-Salem and specialize in lettuces, microgreens and edible flowers.

Like Harmony Ridge, their farm is north of the Carolinas Urban-Rural Connection study area, but the cities within the study area provide an important source of customers. The large geographic range that restaurants in urban areas must go to in order to source food (and farms must cover to find customers) illustrate both the challenges and wide opportunities for fostering connections through such economic linkages.

Hendel and Seldner supply dozens of restaurants, most of which Seldner walked into to personally pitch.

The couple sends out a weekly availability list to its restaurants and tracks orders online. After harvesting and packaging, Hendel and Seldner load up the produce and personally deliver to cities throughout the Piedmont. The farm is profitable, employing three full-time workers, but Hendel said they have to keep hustling.

Despite the growth in farm-to-table restaurants and the increasing popularity of farmers markets, the number of farms is nevertheless on the decline in North Carolina due to loss of farmable land, consolidation and intense competition from corporate farming. Since 1975, the state has lost 50,000 farms. About 46,400 still exist, according to the N.C. Department of Agriculture and Consumer Services.

Small family farms like Harmony Ridge and Fair Share that specialize in fresh, organically grown food are not the norm. At the turn of the 20th century, farm-to-table was a way of life for many: Small farms surrounded cities, and urbanites were more likely to keep gardens and grow some food themselves. Today, the majority of farms are still family-owned and operate on less than 50 acres, but the most profitable are specializing in mass-produced livestock, dairy and poultry. And even they are losing out to conglomerates.

“We see small farms going out of business or stopping their production for a for a variety of reasons,” said Reid, with the Piedmont Culinary Guild. “It’s hard to compete against the grocery store prices that our society has become accustomed to.”

The farm-to-table movement is often fueled by younger and newer farmers, rather than generational farms making a pivot to organic or specialized produce. But they make up a small minority: Only 7.5 percent of North Carolina farms are younger than 35, according to the 2017 Census of Agriculture, and the biggest products by far are commodity crops such as soybeans, corn or wheat.

Harmony Ridge Farms is about 10 years old. Its owners have learned the hard business of farming. The farm has transitioned from a business model based solely on community supported agriculture (where people in the area subscribe to receive produce) to a non-profit providing fresh food to low-income children to a thriving farm that at first specialized in poultry but found a narrower niche in ducks. Farmers markets and restaurants are its primary customers, but Oliver also works with Whole Foods in Charlotte and retirement communities.

“You go back even 50 or 60 years and farms like us were trucking food into Winston or whatever city,” he said. “We’re doing that again. It’s kind of coming full circle. Food should be coming from someplace nearby.”

Heirloom in northwest Charlotte is one of those rare restaurants where every ingredient is locally sourced. In fact, chef-owner Clark Barlowe will only order from North Carolina farms.

“I don’t know about you, but I don’t know where 50 or 100 miles is from where I’m sitting,” said Barlowe. “To say it all came from North Carolina clearly resonates with people.”

Barlowe has about 70 farms on his go-to list, most of which found him, and he shops the regional farmers market in Charlotte. He also keeps his own gardens and beehives, and even forages for food in the wild. It’s intense work, and much of it takes place outside his first love: the kitchen.

“It’s incredibly time-consuming,” Barlowe said. “It takes hours and hours to do a food order each week. In conventional restaurants, you pick up the phone and get what you need. Here, we get deliveries every day and make orders every day.”

Sourcing from local farms keeps Barlowe creative. Sometimes he gets mussels out of Wilmington, sometimes he doesn’t. A berry crop might ripen later than expected. Small catastrophes or small boons can turn a menu around. And getting great ingredients is becoming competitive.

While Barlowe conducts much of the farmer business personally, he does work with a few regional distributors who help small, local farms get into the big-city restaurants without having to deal with distribution and sales. New Appalachia is one of those distributors, and it too feels the ups and downs of farm-to-table life.

“In the past 10 years of watching this (trend), six out of 10 restaurants last more than three years,” said Caleb Crowell, CEO and owner of New Appalachia. “It’s terrible odds and a tough game.”

Indeed, while there are examples of farm-to-table restaurants thriving and turning around a small town’s fortunes — Kinston’s Chef and the Farmer run by celebrity chef Vivian Howard is the most often cited - those are the outliers.

“We shouldn’t get too fuzzy-feel-good,” Reid warns. “Local food is going extinct…. Why should we care? The answer is what happens to food happens to people. When you pursue production of food for money, you lose the moral compass of what is right for people.”

And sometimes the axis of a whole local food economy turns on one business: One of the best-known chefs in Charlotte, Barlowe recently announced he plans to sell Heirloom and move out to Oregon to be with his fiance. It’s a blow to both diners and local farmers.

“Farm-to-table is something I completely believe in because you know that the dollars you are spending are staying in your community,” Barlowe said. “But to say whether I’ll do the same again, it’s too early to tell.”