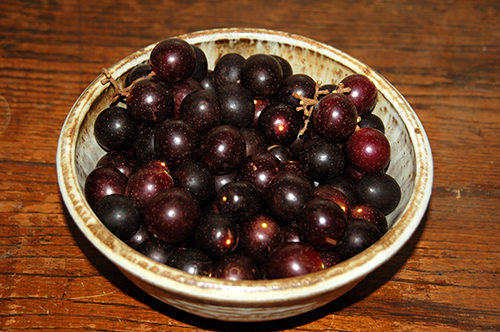 In fall, native plants in the Uwharries offer up a bounty of fruits for wildlife and humans alike.

Muscadines seemed to ripen a little early this year.  My mom and I picked dozens of deep purple berries in mid-August.  Their musky scent helped us locate several vines.  Their flavor is just as intense.  There’s nothing quite like picking a warm muscadine and popping it into your mouth – biting through the thick, tart skin then extracting the sweet, gelatinous heart.  Instead of spitting out the hulls, I chew them until the bitter tannins make my jaws ache.

My great-grandmother used them to great effect in her muscadine preserves.  No refined jellies for her.  She squeezed out the innards, got rid of most of the seeds then threw the hulls in the pot.  This snout-to-tail approach is back in vogue – a trendy restaurant in Atlanta currently serves a muscadine custard tart, hulls included, for $8 a pop.  I imagine Grandma Noona laughing and saying, “Well I hope my never!”  She wasn’t trying to make a big statement with her muscadine preserves – she was simply poor and resourceful – but she knew they were something special.  My mom still recalls the way the hulls plumped up with little globs of jelly. 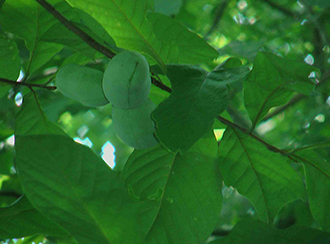 Pawpaws generally ripen around this time as well.  The fruits are about the size of a National Pickler.  At their best, they have a creamy texture and the sweetness of mango or banana.  Because of their brief shelf-life, pawpaws have never gone into widespread commercial production.  While this species isn’t common in the Uwharries, in moist bottomlands, it can grow in large colonies.  (Think of the lyrics “way down yonder in the pawpaw patch.”)  The trees themselves look tropical, with smooth, thin bark and large, light green leaves that turn golden in fall.  They act as larval hosts for the zebra swallowtail butterfly.  The maroon blooms resemble a tricorner hat and appear before the leaves mature.  Their faint, fetid smell attracts few pollinators.  People sometimes put out rotten fruit, or even roadkill, near their trees to entice fruit flies and blowflies to the task.

I was taught to wait for a good, hard frost before gathering persimmons.  The weather probably plays a role in ripening them, but the advice is really more about patience.  You have to wait until they’re ready to fall off the tree or else they’ll pucker your mouth.  It’s nice to eat a few out of hand as you work, but it’s hard to think of any higher calling for this humble fruit than persimmon pudding.  The number of recipes probably rivals the number of trees in the Uwharries.  A Google search resulted in 16,100 hits.  I imagine that number would double if church cookbooks were available on-line.

Collecting food from the woods is satisfying on many levels.  Foraging for seasonal fruits connects us with the rhythms of nature.  And who doesn’t enjoy getting something for free?  Maybe it takes us back to the days of our hunter/gatherer ancestors.  But bear in mind that flavor and quality can vary among plants in the wild.  If you want consistently tasty fruit, buy a cultivar from a reputable nursery.  And be prepared to share the bounty with our local wildlife.