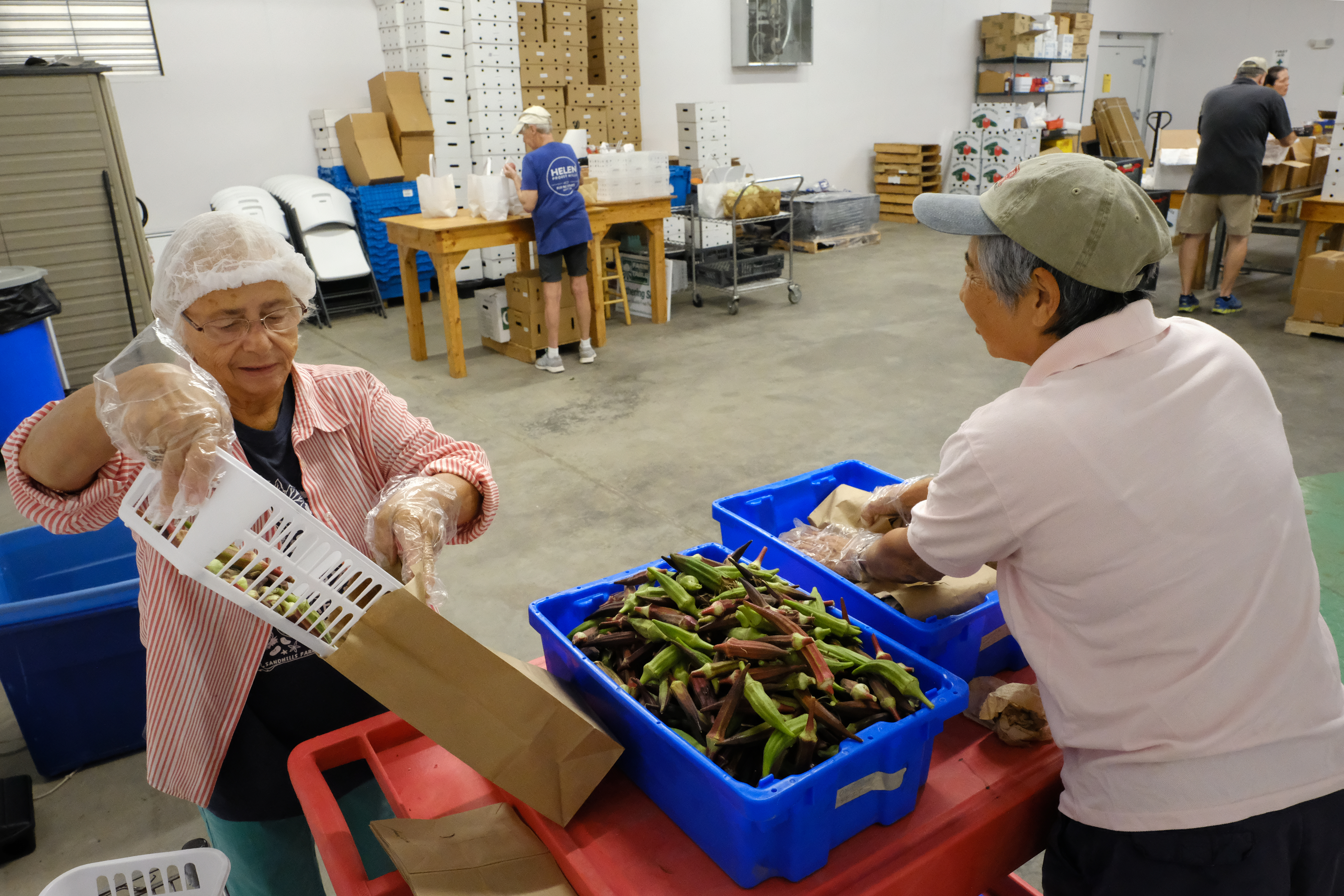 In any conversation about strengthening urban and rural connections, local food systems are usually suggested as the prime example. Images of farmers’ markets come to mind, where urban consumers have the opportunity not only to buy fresh fruits and vegetables but to get to know the growers and producers.

The food system in reality is more complex, and involves more than just growing food and bringing it to the table. It reflects an array of regulations, policies and markets. So what do we know about local food systems in our region? What impact do they have on urban and rural consumers, as well as regional social well-being and economic connections?

What is local food?

There are many definitions of “local”: some focus on the distance traveled between the farm and the consumer, others on how the food is grown, who grows it or how it is sold. The U.S. Department of Agriculture defines local food as that which is grown and transported less than 400 miles or within the same state. The North Carolina Cooperative Extension uses the state boundary to define local. FreshPoint, one of the nation’s largest wholesale produce distributors and a subsidiary of food giant Sysco Foods (located in Charlotte), uses a 250-mile radius as its definition of local.

Some equate local food with expectations of how the food is grown or produced – pesticide-free, organic, free-range. Some consumers assume food that is organic is locally produced, or food that is produced locally is organic, when neither is necessarily the case. Sometimes, the definition of local foods is determined by whether the farmer or producer is small-scale and family-owned and operated. Beyond the distance the food has travelled or the size of the farm, it is important for consumers to understand more about how food moves from farm to table through the supply chain.

What is a local food system?

A local food system or supply chain refers to all the steps that food must go through before it ends up on the table. It begins with conserving and stewarding land for production, protecting it from urban development and poor land management practices. It continues with production of the grains, fruits, vegetables and meats, then continues through to sorting and processing to create value-added products, such as preserves, cleaned, chopped and bagged produce, or smoked meats.

The food system relies on intermediaries who aggregate and package the produce and distribute it direct to consumers or to retailers, food hubs, or institutions such as schools or hospitals. The extent to which these steps are carried out locally, minimize distance traveled and meet consumer expectations for fresh, healthy, safe, high-quality and affordable food determine whether this is a local food system.

Local food is often used to describe a short supply chain, where the farmer or producer sells directly to the consumer through on-farm stands, you-pick operations, farmers’ markets and community-supported agriculture (CSA). This is termed a direct supply chain. Local food hubs that act as intermediaries between farmers and consumers are also included as direct supply chain members.

The idea of a “value chain” is that value is added at each stage of the process and that people at each stage receive a fair reward for their contribution to the final product.  Although many raw materials are grown, mined, or extracted in rural areas, value-adding processes are mainly carried out in urban or suburban locations (or in other countries). This is both an example of rural-urban connections and an opportunity for rural companies and communities to add value and receive appropriate rewards in the form of more investment, incomes and skill development.

What are the national trends in local food systems?

According to the 2017 Census of Agriculture, over 130,000 farms across the United States sell $2.8 billion worth of food directly to consumers each year, and nearly 29,000 farms sell a further $9 billion worth of food directly to retail markets, institutions and food hubs. There are an estimated 8,759 farmers’ markets, 1,501 on-farm markets, 848 CSA programs and 237 food hubs for locally or regionally branded products. Although this activity accounts for only 8 percent of U.S. farms and 9 percent of total farm production, it is, with some exceptions, growing in scale and impact in every region.

There are three main reasons for this growth. First, there has been a shift in consumer preference driven by interest in healthy, safe, and fresh foods, seeing local foods as a way of boosting local economies and concerns about business practices and environmental stewardship.

Second, there has been large-scale investment through national Farm Bills in promoting the production and marketing of local foods. From 2009 to 2016, the USDA invested more than $800 million in infrastructure for processing, storage and distribution of local foods.

Third, there has been a dramatic growth of Supplemental Nutrition Assistance Program (SNAP, commonly referred to as food stamps) redemptions at farmers’ markets and a sharp rise in farm-to-school sales across 40 states.

There are, however, some grounds for caution. Research from the Wallace Center shows there has been a leveling off in the number of farmers’ markets and food hubs, with many smaller ones struggling to survive and others only sustained through public or philanthropic subsidy. Now that large retailers aggressively sell local and organic produce, the pressure on independent, marginal outlets will only increase.

There is evidence of modest economic gains due to strengthening of local industry linkages and some improved profitability for small and medium-scale producers if they can take advantage of their ability to produce highly differentiated products for local markets. One example of strengthening local farm industry linkages is the Sandhills AgInnovation Center in Ellerbee, N.C., serving Richmond and Montgomery counties. The Sandhills AGInnovation Center is a supply chain intermediary that serves as a produce aggregator and processor built to connect Sandhills farmers to new markets and resources.

But questions remain about whether local food systems produce significant benefits for rural communities.  Some studies point to the need to assess impact beyond revenues, profits, and economic multipliers to factors such as skills expansion, new product ideas and new facilities, all of which could yield long-term rural development benefits.

What do we know about local foods in the region?

North Carolina is the nation’s top producer of sweet potatoes, tobacco, poultry and eggs. Approximately 32 percent of N.C. agricultural production value is in crops and 68 percent is in livestock, according to the NC Department of Agriculture and Consumer Services. North Carolina is the country’s 14th-largest agricultural exporting state, shipping more than $3.5 billion in agricultural goods abroad, according to the USDA. Agriculture in the state is important and accounts for a significant part of the local economy in the eastern portion of the state.

There is no reliable data on the number of local food outlets in the region, although self-reported numbers in the USDA Agricultural Marketing Service’s Local Food Directories suggest that, at a minimum, there are 88 farmers’ markets, 24 on-farm markets, six CSAs and three local food hubs. But these are likely to significantly under-estimate the scale of activity. One example of how local foods in the region are being accessed is the online, searchable map for the FreshPoint local and organic farms wholesale market program. The map for the Charlotte region allows users to enter a zip code and searchable radius to generate locations and overviews of the farms where FreshPoint purchases local and organic foods.

Efforts are underway in the study region to better map and connect farms with consumers, chefs and wholesale buyers. For example, Rivendell Farms of the Carolinas is developing an online map of farms, food hubs and CSAs for the 14 counties in the Charlotte metropolitan area. This map effort builds upon the work of the Center for Environmental Farming Systems mapping efforts, and others such as the Carolina Farm Stewardship Association and Piedmont Culinary Guild who recognize the value and importance of having a social media presence and a searchable farm access map. This farm location and operations map is similar to other local culinary and craft food initiatives such as the NC Craft Brewers Guild Map.

What's next for local food systems?

Discussions with national and state experts provided some indications as to where the local food systems movement may be heading, as well as challenges.